Time and again we have said that Hyundai has done brilliantly in India for the company has managed to do what India’s largest car maker, Maruti Suzuki couldn’t. The Korean car maker is able to sell an entry-level small car like the Eon while from the same showroom they are able to attract buyers of the expensive Santa Fe. Thus, Hyundai isn’t associated as a car for the masses in spite of many of their offerings addressing the mass market segment. Case in point being the Elite i20, a car which is quite expensive (by hatchback standards) and yet it is not only the top seller in its segment but also the top selling Hyundai car in India. The i20 has been shattering sales records time after time, from doing upwards of 10,000 units a month to having crossed the 1 lakh sales mark in just 11 months. There is something about this car that attract buyers in an instant. 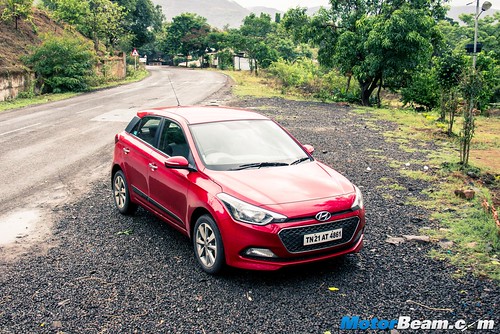 The i20 is ever ready to strike a pose, after all it’s an attractive looking car

Prior to the launch of the Elite i20, the pictures of the car leaked and not many liked this Hyundai’s design considering the Elantra’s styling is a masterpiece. But with time, the way the i20 looks has grown on all of us and that’s largely because of the brand being very strong. Buyers have faith in brand Hyundai and didn’t hesitate one bit to opt for the car. The result is, we see a ton of Elite i20s on Indian roads and there are so many of them that the car just doesn’t get out of your mind. Ironically though, more top-end variants are being sold with the 16-inch alloy wheels being an instant giveaway about the trim. The rear-end is no doubt the most pleasing aspect of the exteriors. 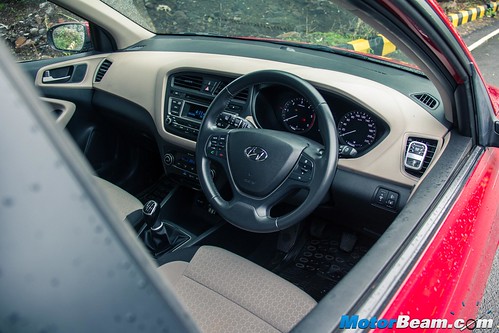 The interiors are the party-piece of the Elite i20, they look very good

The interiors are the strong selling point of the Elite i20. Extremely well laid out with a nice dual tone flavour, the car feels every inch premium on the inside and is loaded with a ton of features. Although Hyundai has skipped on some equipment which was seen on the old i20, the company had better plans in place as those features have made their way to the i20 Active. But still, at least the option of side airbags would be nice, if not on the Elite, at least on the Active. The small touches are what impress the most like the electro-chromatic rearview mirror, keyless go, auto retracting outside mirrors when you approach the car, steering position indicator and automatic headlights. 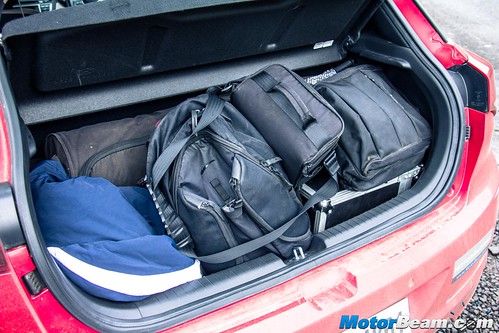 The boot can accommodate most of your luggage, here it’s with our camera equipment

What is surprising is the lack of a distance to empty feature, something which we have got so used to that the omission of the same comes as startling. Some Hyundai cars do get this feature so the same being skipped on their premium hatchback is not so welcome. Another thing which we definitely expect from a car costing close to Rs. 10 lakhs is auto door locking, a feature the Maruti Swift has had since 2011. Interior space is good and so is boot space but not class leading as the upcoming Honda Jazz trumps the i20 fair and square. It will be interesting to see what buyers prefer, more space or better equipment in the premium hatchback space, I am confident it’s the latter and thus the i20 has little to worry about the upcoming Japanese invasion. 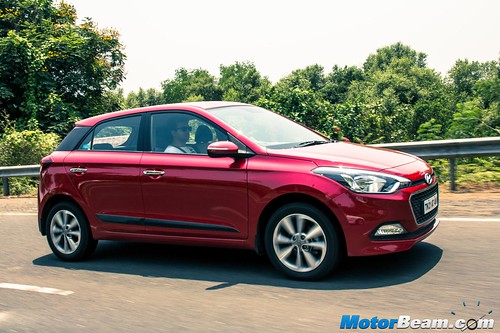 The 1.4-litre diesel engine is very punchy and is matched to a smooth gearbox

Our long term tester is powered by the 1.4-litre U2 diesel engine. With 90 horses on tap and 220 Nm of torque, performance is swift and the car makes ample progress once you get past the low-end. There is adequate punch for both city and highway driving but what’s most impressive is the NVH. The car is almost dead silent and the oil burner doesn’t get much vocal till you stretch it past the mid-range. A nice 5000 RPM redline shows the eagerness of the diesel motor to rev. The current mileage we have been getting is 16 km/l which is very good for the kind of traffic we have encountered while driving this car. 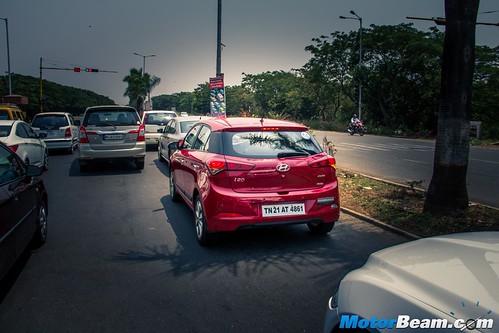 Our long term Elite i20 has spent a fair amount of time in city traffic which means a lot of low gear driving and heavy clutch usage. What pleases the most is the light clutch that makes it such a breeze to drive this car in stop and go conditions while the gearbox is super slick and offers effortless shifts. The further icing on the cake is the light steering which makes the i20 so easy to manoeuvre on Mumbai roads. The feel from the wheel is less than required but the steering is way better in feedback than the previous generation car. Thus a definitive step in the right direction. 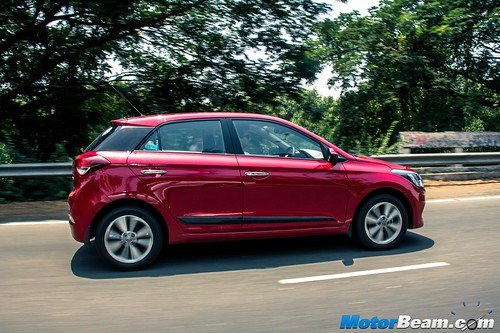 Ride quality is good, stability is excellent but handling is neutral and not engaging

Hyundai cars are never known to be driver’s car and even after putting in hours behind the wheel on city, highway and valley roads, that thought doesn’t change. The handling is best termed neutral, no matter how much you try to get acquainted to the slow steering and softer set-up, you can’t make the i20 go from corner to corner with precision. But in its defence, the Elite i20 isn’t a car for spirited driving, it scores high on comfort and on that front the ride quality is good and the high speed stability is excellent too, the brakes offering good stopping power. 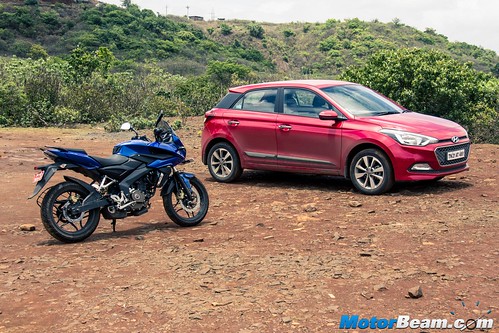 Everyone loves an Adventure and so do we; the i20 poses with the Pulsar AS 200

My current stint with the Hyundai Elite i20 has been very pleasing. I have had a lot of work of late and the i20 has just made commutes easier with its light controls, easy to drive manners and frugal engine. The diesel mill hasn’t disappointed me when I have asked for power to overtake on the highways. The vehicle delivers very much on its promise and when you shift from another car to this, you realise the massive steps taken by Hyundai on the design and feel good factor front. But with the monsoons now here, the weather being serene, the roads being wet and my productivity questionably taking a hike, it’s time to get behind the wheel more often and that’s why I now pass on the keys of the Elite i20 to my colleague and take responsibility of doing a long term test of some other car from the same category. But I already miss the i20’s comfort and premium interiors, so long Elite! 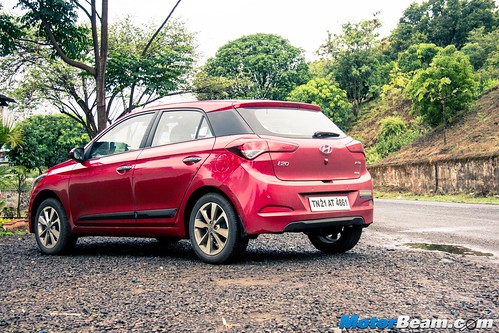 Being impressed by the i20’s comfort, I have handed over the keys to our deputy editor

Hyundai i20 N Line Spotted In India For The First Time?

Hyundai i20 Coupe Is Cool, Should It Come To India?