I mentioned in my previous report how the Hyundai Grand i10 CRDi was keeping me happy and serving us well. The vehicle was being mostly used for city duties and that occasional highway run and we had no major complaints with the car at all. In fact, the Grand i10 feels so niggle-free and reliable to use that it became one of the most highly sought-after car in the MotorBeam garage. 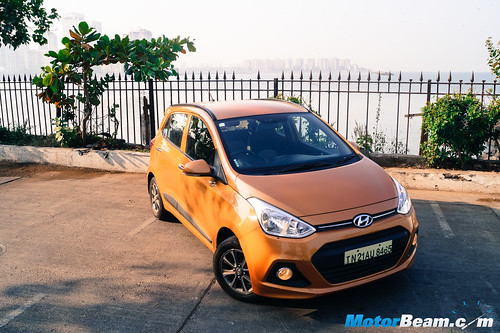 The previous generation Hyundai i10, which is still being sold in the Indian market (to the cab market), was supremely popular thanks to the fact that it was quite a value-for-money proposition. Not many options were available in that price bracket at that time and hence the i10 was competing with the Maruti Swift. Taking the popularity of the i10 name forward, Hyundai then introduced the Grand i10. The Grand i10 was, err, more grander than the regular i10 and it provided the consumer with a long equipment list, youthful looks and excellent quality. It also addressed one big issue that the old i10 faced, the lack of a diesel engine! 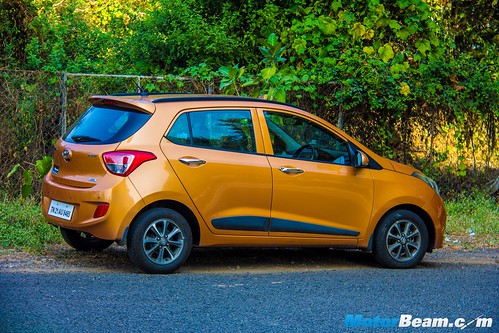 Hyundai has successfully managed to keep the Grand i10 perfectly proportionate and it looks pleasing to look at from all angles. The diamond cut alloy wheels really look good too. The copper colour managed to showcase the car’s lines and curves beautifully, but I prefer the Grand i10 in silver more. Also worth mentioning is the build quality which is very good and the vehicle can withstand dings easily. The Grand i10 is quite a common sight on our roads though. If you compare it side-by-side with the Maruti Swift, the former looks a bit smaller in size but Hyundai has optimised the cabin to free out a decent amount of space. 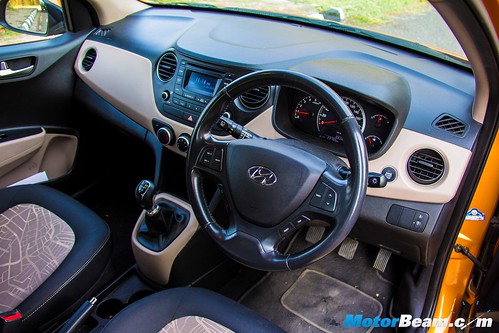 Interiors are well laid-out and the design looks very pleasant

Talking about the cabin, well it goes without saying that the fit and finish is extremely top-notch and the quality feels very consistent everywhere. There are a lot of features too but some important bits like auto door lock are missing. My only complaint with the Grand i10 has been the audio system which used to act funny at times. The feature that I really loved the most in this nippy little hatchback was the keyless-go function, something that I really missed in the car that replaced the Grand i10 for me. 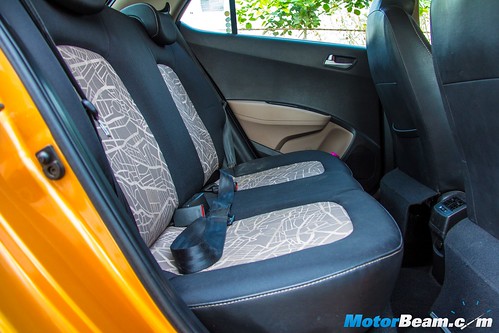 Space inside the cabin is decent, good number of features

The front seats are very good and offer decent levels of support. Over long drives, you don’t feel tired at all. The windows are very large and add an airy feel to the cabin. The AC performs nicely but sometimes it did throw up tantrums though. Cooling the cabin takes some time if the car has been parked in scorching heat. The seats are made up of good fabric and the overall colour scheme of the upholstery feels nice, though the lighter areas are quite prone to stains and marks. Space at the rear is decent while the boot isn’t too large either. However, we were all praises for the Grand i10’s interiors after doing an intensive comparison with the Mahindra KUV100. 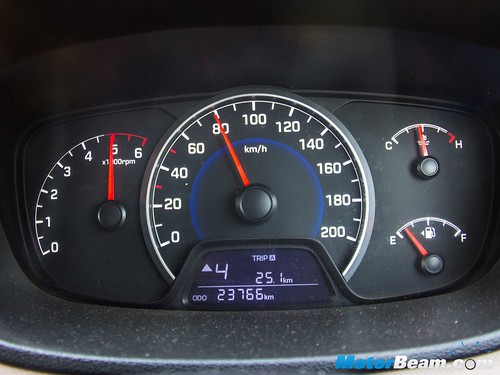 The diesel engine is good on performance as well as efficiency

The Grand i10 comes with a 1.1-litre, 3-cylinder diesel engine. At first, when I got the car, I was a bit apprehensive about the engine’s capabilities but all my doubts were put to rest the very next day when I took the car for a long-ish spin across the city. The engine is tuned for peppiness and it feels very lively. Sure, there is some turbo lag but the car feels easy to drive even at low RPMs. The engine isn’t excitingly quick but it does its job well. 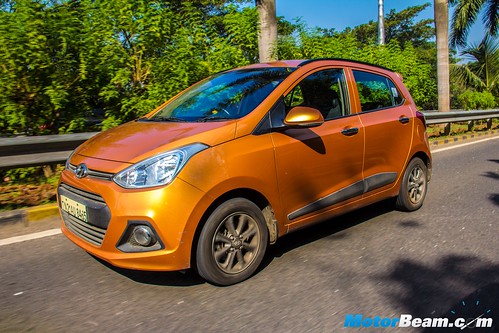 The transmission is pretty smooth and the clutch is light too

The engine has the best performance at the mid-range and the pull after the turbo kicks in is extremely good. The vehicle might be slow when it comes to 0-100 km/hr timings on paper, but it has enough punch for city as well as highway driving. In fact, the tiny engine can easily do speeds above 120 km/hr all day long without feeling strained at all. The transmission is also well calibrated and gear shifts are pretty smooth. Talking about fuel efficiency, well we managed to extract an average 16.26 km/l on the Grand i10 with a lot of driving being done in peak traffic hours too. On the highways with some spirited driving, the hatchback returned 18-19 km/l while on a really bad day with a lot of stop-go traffic and short halts we managed fine with just 12-13 km/l. 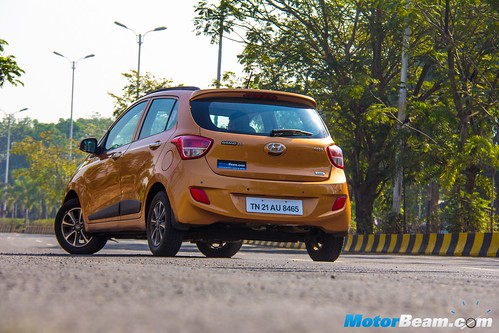 Steering is light but lacks feedback, ride quality is good

The steering on the Hyundai Grand i10 is very light and this comes across as a boon while driving in the city or while parking the car. However, it just doesn’t weigh up as you would like it to at high speeds. Also, it really lacks feedback and the size of the wheel itself is a tad too big. The ride quality however is very good just like some of the newer lot of Hyundai vehicles. It doesn’t feel boat-like, like the older i20 or the Verna. The suspension soaks bumps pretty well. The brakes are also very sharp and they do their job with ease. Wish the tyres had more grip though. 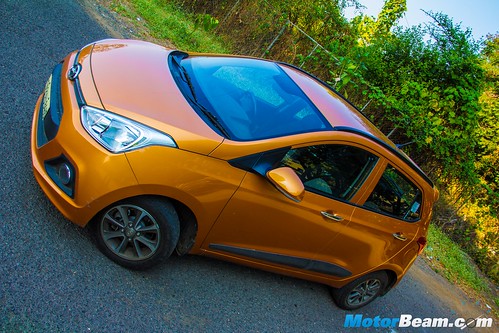 The Grand i10 is a very easy to drive hatchback

Above parts prices are for Delhi and labour includes service tax at 14.5%. Diesel denoted by (D). After Maruti Suzuki, Hyundai has the largest sales and service network in the country with good quality of service as rated by most owners. 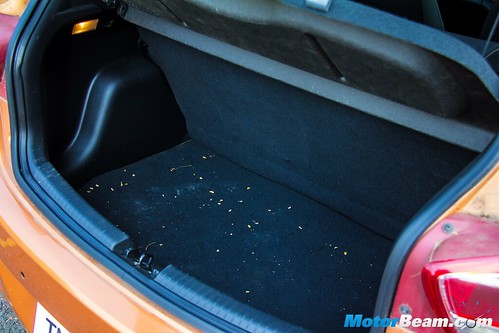 The Grand i10 scores good on practicality, satisfactory boot space

The Hyundai Grand i10 has everything that is needed in a hatchback in this price range and it easily trumps over all its rivals. The vehicle is very well-packaged and comes at a reasonable price point. It is also selling in very good numbers and averages sales of approximately 10,000 units a month. The Grand i10 has also been featuring on the list of the top 10 selling cars and it is also the second highest selling car in its segment, the first being the Maruti Swift. However, the Grand i10 is getting a bit old now and we expect Hyundai to launch a mid-life facelift of the hatchback in the near future. 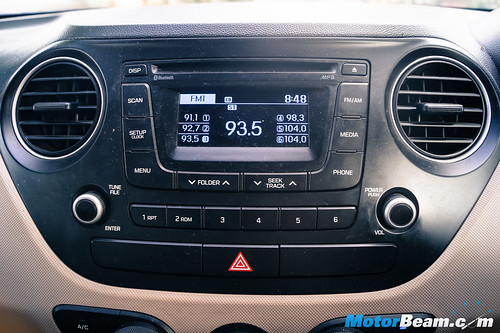 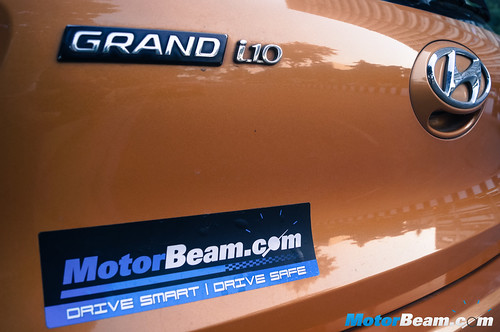 “In spite of being a 3-cylinder diesel engine, the Hyundai Grand i10 is a smoother performer with good NVH, something which really helps in the city when driving in lower gears as the vibrations are low and turbo lag is very well contained. Not a driver’s car, the Grand i10 has a vague steering but is high on practicality with a spacious cabin and a lot of convenience features on offer. An excellent car for the city but not really a highway machine.” – Faisal Khan, Editor, MotorBeam.
“The Grand i10 puts practicality on the table like no other and that’s exactly what this segment buyer needs. I really like the punchy nature of this 3-cylinder diesel motor and it delivers decent performance along with exceptional NVH levels. With its smooth shifting gearbox, the Grand is the perfect car for me for routine city ramblings. I find the steering a tad too large and the handling strictly average but besides this, the Grand i10 checks all the boxes. It’s no surprise then, that it holds the “2013 MotorBeam Car Of The Year” tag to its name.” – Dr. Javeid Khan, Deputy Editor, MotorBeam.
“I have never been a fan of Hyundai cars and wasn’t too excited to have the Grand i10 on board with us. I mainly used the hatchback for intra-city runs including some local highway runs and the car gave me hardly any reason for complaint. In fact, it is very easy to drive and the compact dimensions make it very chuckable in our traffic conditions. The fuel efficient engine made things sweeter and overall the Grand i10 succeeded in proving to us that it is indeed one of the best cars in its segment.” – Parth Gohil, Road Tester, MotorBeam.

India Made Hyundai Grand i10 Scores 0 Stars In Latin NCAP