Over a period of time, certain adjectives get associated with car brands. When you hear the word Jaguar, the three things that immediately come to ones mind are – luxury, comfort and exclusivity. But apart from those three factors, Jaguar cars also have a soul which makes them terrific to drive. We drove the XKR-S, XF-S and XJL on the Buddh International Circuit and came out pleasantly surprised. 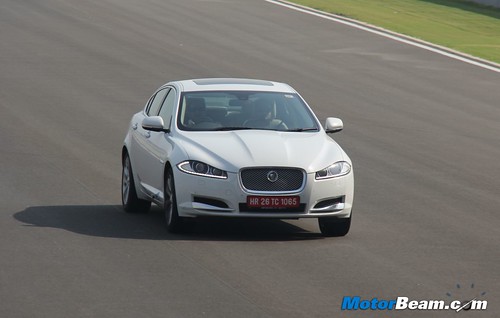 Jaguar had arranged a 3-day track experience for customers and media at India’s only Formula 1 circuit. With the F1 race around the corner, the timing of the event was just perfect. Present on the occasion was the complete line-up of Jaguar cars including the fiery XF-R. The event was very well organized and every one got a good amount of track time, getting a chance to better understand the vehicles. The track experience was divided into three key activities – guided laps, dynamic driving and hot laps.

Trained international drivers from Jaguar had come to guide us on driving on the limit at the track. We first went in the Jaguar XKR as a co-passenger with the driving being done by Jaguar’s highly skilled driver. He made it look so easy (video coming soon) that I was already brimming with confidence. 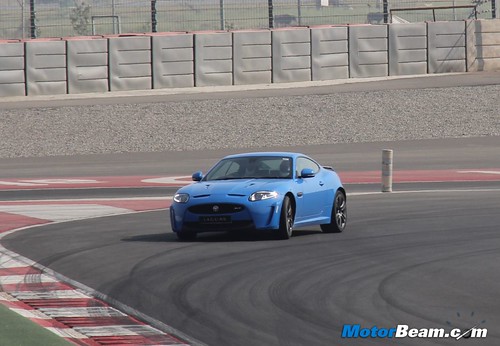 It was time to drive and the Jaguar XKR-S was the vehicle I went in first. For starters, the Jaguar XKR-S is the fastest production car Jaguar has ever built. It is powered by a 5.0-litre, supercharged V8 petrol engine which belts out a massive 550 PS of power between 6000-6500 RPM and an insane 680 Nm of torque between 2500-5500 RPM. This engine is mated to a 6-speed automatic gearbox and the British automaker claims a 4.4 seconds sprint to 100 km/h from standstill, with the top speed is limited to 300 km/h.

I quickly slotted the XKR-S into S mode and left the pit lane. A slight nudge on the accelerator and the cat was ready to pounce and unleash all its ferocious horses on the 5.14 kms race track. The XKR-S is Q-U-I-C-K and how. It never feels out of breath even when you hit the redline and keeps going, strongly pulling to 240 km/h on the long straight between turn 3 and turn 4. But its not the straight line performance which is impressive, rather its the way this Jaguar holds onto the road even when you turn at speeds you shouldn’t have. Handling is supreme and you can dart into corners with utmost precision. While you are doing all this, the exhaust is belting out a sporty roar, which is so loud, it can be heard all around the circuit. The rear-wheel drive also enables you to dart out with a bit of sideways lunacy. No, I did not go sideways, but the fastest Indian did.

Yes, it was Narain Karthikeyan who was present on the track, thrilling everyone with the right performance of man and machine. I sat with Narain in the Jaguar XF-R, which too is powered by a 5.0-litre supercharged V8 but producing 510 PS of power and hitting 100 km/h in 4.9 seconds. Yes, a sub 5-seconds time to reach the ton for a car which has 4-doors and the best of luxury in its segment. Narain drifted the XF-R with utmost prowess, all the way through the long right hander at turn 10. The Jaguar XF-R gladly obeyed his commands but never felt out of control even with the tail out and tyres screeching. 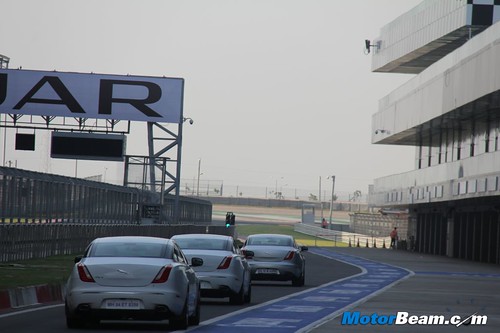 The third activity was dynamic driving, which included slalomimg, hard braking and cornering. Needless to say, the Jaguar XF performed brilliantly. The instructors gave us the specifics of the task which was to slalom around the cones as fast as possible without knocking them over. The key was to maintain a constant speed. If you tend to accelerate while you corner, you are bound to mow down a few cones. The steering was accurate and we breezed past without hitting any of the cones. During sharp steering inputs, one can feel the body roll, but the chassis balance is so impeccably tuned, you will be quite confident behind the wheel. On hard braking, the XF stops quickly and one can feel the ABS kicking in. This part of the program was to help the driver and car understand each other better. 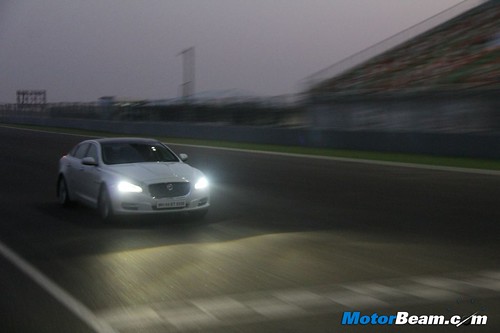 The Jaguar XJL may be a super luxury sedan but the Jaguar DNA is evident when you hit the track. By no means it is a track car and you can’t compare its track manners to its siblings, the XKR-S or the XF-R but behind the wheel its does inspire confidence to take up the challenge of the track. The suspension is tuned for comfort and the steering feedback is not the best amongst the cars we drove a bit earlier but this long wheelbase Jaguar does know how to drive around with fortitude. Despite carrying so much weight, the XJL was fun to drive and would tackle corners without steeping out of line. 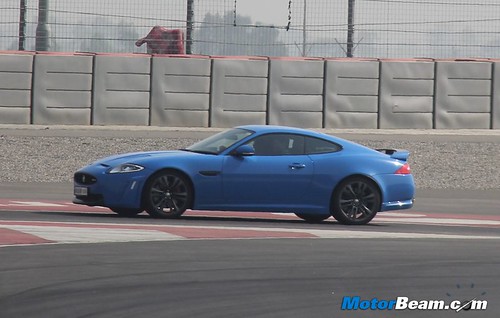 Alas, the red flags came out while we were on the flying lap, the reason being bad light and we pulled into the pits. The day had come to an end, the combination of track and machine was perfect and though it was a fun filled day, there is no limit to driving on the track which will satisfy the soul. Driving Jaguar cars on the track was a surreal experience. It is indeed heart warming to see Jaguar having so much confidence on their vehicles, that they brought their complete line-up to the track, including the massive XJL. The Jaguar team pulled the cars into the pit lane and that was the end of a fantastic adrenaline filled day with the perfect set of wheels on the perfect piece of tarmac. 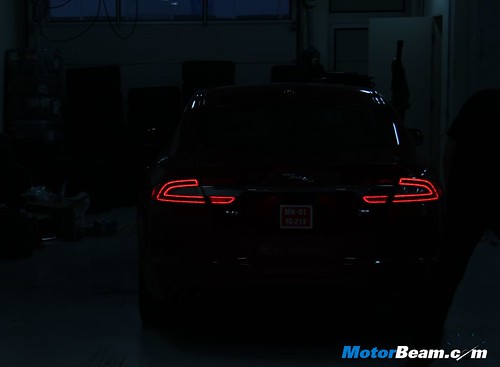 JLR To Invest In Engine Assembly & Manufacturing Line In India

Jaguar Recalls XJ In The States