When the much awaited XE, a.k.a. the baby Jag was first unveiled, it took the segment by storm because it was awaited since years with rumours time and again of its arrival. When Jaguar launched the XE in India, they only offered it with a petrol engine and that too the fantastic 25T which didn’t make us miss the diesel. However, diesel being the fuel of choice in this segment meant that Jaguar had to bring in the oil burner and we have finally got to test it.

Motor Quest: The Jaguar XE was first launched in India in 2016 only with a petrol powertrain. Now with a diesel mill under the hood, it’s about time the baby Jag brought some volumes for the British carmaker. Will it? 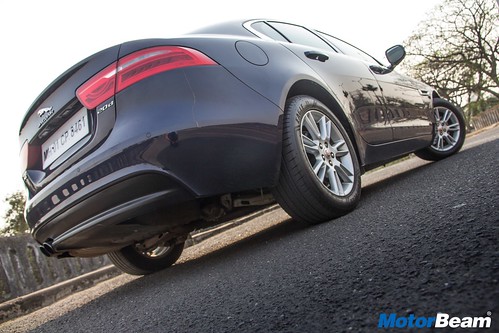 The rear profile looks quite sleek and elegant

Exteriors – Nothing much has changed on the XE Diesel. Both the petrol and diesel versions of the XE are identical when it comes to looks and equipment. We’re driving the mid-level Prestige trim of the XE which gets black radiator grille with chrome surrounds, Bi-function Xenon headlights with J-blade LED DRLs, chrome side window surrounds and 17-inch alloy wheels which end up looking very basic. The British marquee could have offered at least a different design for the mid and top level trims. The rear is minimalist-looking too with only the sloping roofline and the LED tail-lights adding some bling. 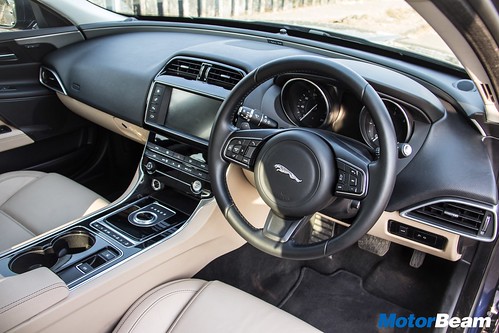 Minimalistic approach follows to the cabin too; quality of plastics could have been better

Interiors – The cabin of the XE diesel is very much like its exterior, understated. The dashboard is neatly laid-out but is quite a mixed-bag of premium as well as not so premium materials. For instance, some buttons have the click sound which just robs away the premium quotient. That said, the air-con controls are neatly laid-out below the 8-inch touchscreen infotainment system. Overall the cabin is a nice place to be in and comes loaded with features. In this Prestige trim, you get leather upholstery, interior mood lighting, Meridian Sound system, cruise control and speed limiter, dark satin brushed aluminium inlays and power folding and auto-dimming heated door mirrors with memory function. The front and rear seats offer good support and comfort but the headroom is a little tight owing to the sloping roofline. Anyone below 5’10” should be comfortable in the rear seat. However, due to the tall transmission tunnel and protruding rear AC vents, the third passenger would feel he/she was uninvited. The 455-litres boot is as practical as it can get. Unlike the Mercedes C-Class and the BMW 3-Series, the XE’s boot is flat and wide and moreover, the space saver tyre is neatly tucked away under the floor.

Jaguar XE Spotted Ahead Of Auto Expo Launch In India