Bajaj Auto and Kawasaki have announced the launch of the 2013 Ninja 300, which is priced at Rs. 3.5 lakhs (ex-showroom, Delhi). This means the on-road price of the Ninja 300 will go over Rs. 4 lakhs, something we reported days ago. The Ninja 250R was launched at a price of Rs. 2.70 lakhs (ex-showroom, Delhi). Thus the Ninja 300 is priced at a significant premium over the motorcycle it replaces in the Indian market. There is no ABS on offer as we reported earlier and the company has no plans to offer ABS in the future as well. Kawasaki does sell the Ninja 300 in international markets with ABS. The Japanese company has sold 3000 units of the Ninja in India till date (250R and 650 combined).

The Kawasaki Ninja 300 is powered by a liquid-cooled, twin-cylinder engine which is placed in a parallel configuration. This 8-valve DOHC motor produces 39 PS of peak power at 11,000 RPM and 27 Nm of peak torque at 10,000 RPM. The engine uses a 32 mm throttle body and is mated to a 6-speed transmission with assist and slipper clutch (borrowed from its bigger siblings which prevents rear wheel lock up during quick downshifts). 0-100 km/hr should take less than 7 seconds, while top speed should be around 175 km/hr. 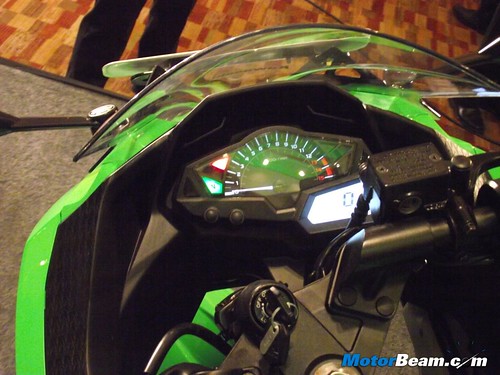 Two colours are offered, green and white. The company has 500 units of the Kawasaki Ninja 300 in stock. 37 mm telescopic front suspension and 5-speed Uni-Trak rear suspension is used on this performance motorcycle. The rear tyre is 140 mm wide with different rubber compound over the 250R, while the front is 110 mm, both placed on 17-inch alloy rims. The Ninja 300 weighs 172 kgs and has a 17-litre fuel tank. The ground clearance is 140 mm and the seat height is 785 mm. The bike will retail through Bajaj-KTM showrooms across the country.

The Kawasaki Ninja 300 is assembled in India, with the kits imported from Thailand via the CKD route. The local assembly takes place at India Kawasaki Motor, which is the assembly operation of Kawasaki India, located at Bajaj Auto’s Chakan plant. Bajaj-Kawasaki are heavily localizing parts, with the headlight and dashboard already being locally sourced. In the future, the company plans to localize more components, which should lead to a minor price correction. Bookings are open and deliveries will start on first-cum-first-serve basis.

At the launch, Kawasaki has compared the Ninja 300 to the Ninja 250R (pictures from the slides below), showing the improvements. This has been done as the 300 replaces the 250R in India. However internationally both bikes continue to be on sale, so the specs comparison between both is not really needed, since they cater to different segments.