Power delivery improves in a linear manner towards the top-end

Performance – The KTM 390 Adventure is powered by the same 373cc motor that does duty on the Duke. It produces 42.3 BHP and 37 Nm of torque which is exactly same too. But this is the first KTM motor to be BS6 compliant. Probably the only reason there was such a long wait for this motorcycle. The performance delivery from the engine feels exactly the same as the Duke but the final drive gear is altered for better low-end. The motor has a very strong mid-range and top-end but not the best low-end making it quite tricky and slide-friendly in off-road situations. The throttle response is quite sharp and it redlines at same 10,000 RPM. The motorcycle is quick to hit the ton in about 6 seconds while the top speed is close to 165 km/hr.

The 6-speed gearbox is the same but it now gets a bi-directional quick-shifter which aids in better gear shifts while there is a slipper-clutch too. The first BS6 motor from KTM means more refinement which is very likeable in the mid-range but once past that there are some vibrations that can be felt on the handlebar as well as the footpegs but not much on the seat. The 390 Adventure also has the largest fuel tank in the KTM line-up and as it returns close to 30 km/l we can expect a good touring range too. The heating issue has been addressed pretty well as the 390 Adventure gets a new radiator with two fans and it is a bigger curved unit which dissipates heat efficiently.

Very suitable for touring duties, can munch a lot of miles at once

Riding Dynamics – Comfortable ergonomics with a decent seat cushioning make the 390 Adventure a perfect machine for touring duties, while the long-travel suspension both at the front and rear make it capable for enduro duties too. The suspension setup is similar to the Duke but it comes from WP Apex and the suspension is comparatively softly sprung too. We felt the Duke 390 was too stiff for Indian roads but the 390 Adventure just solves it. It gets the same split-trellis frame while it is re-engineered to mount the new radiator, bigger fuel tank and also the coolant box gets a new place. The rake angle is different while it has been made even stronger to withhold the off-road bashing. The feedback from the handlebar is great as it tips into corners pretty well and yet holds the line. Agility and stability haven’t gone for a toss either even though the centre-of-gravity is now slightly higher. 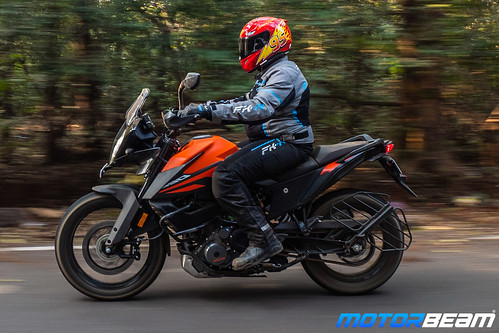 The suspension setup is perfect for Indian road conditions

The 390 Adventure comes equipped with a ton of equipment like the traction control which needs to be switched off for better off-road feedback. With dual-channel ABS, it also gets cornering ABS as standard while one can switch to off-road ABS which turns off the ABS on the rear wheel. It gets a 320 mm disc at the front and a 230 mm disc at the rear while the braking feedback improves as you brake harder, the initial bite isn’t very sharp. Cornering ABS works really well but the tyres are dual-purpose and comparatively thinner than the Duke 390. It gets the same Metzeler Tourance tyres that did duty on the BMW G 310 GS but they are 100-section front and 130-section rear. The tyres might be dual-purpose but they are more road-biased.