This Porsche Cayenne Coupe offers amazing performance, has great driving feel and looks the part too!

Stuttgart based Porsche is famous for its focussed and singular approach to building cars. The company has kept its reputation high as the makers of some of the most involving cars on the road today. Porsche is still best known for its range of two-door sports cars. The brand started diversifying only recently, exploring SUVs, fastback and all-electric segments. In all its ventures Porsche never seemed to have diverted from its core characteristic of delivering cars that are high on quality and driving pleasure. Now, Porsche is yet again taking a more trending route. Meet the Cayenne Coupe – a sportier and more stylish alternative to the regular Cayenne. We want to find out if the Cayenne Coupe is just another attempt in going with the flow or is it truly a more driver-oriented alternative to the regular SUV?

Motor Quest: The concept of SUV-Coupes was pioneered by BMW with its X6. The idea was to have a stylish SUV that was good to drive. The X6 landed in a bit of a controversy over its design but the increasing number of buyers flocking to the dealership was a sign that there was a market for such a car. Over the years Mercedes and Audi have entered the segment with more than one SUV-Coupes in their line-up. Other brands like Land Rover also have more rakish SUVs in their portfolio. Given Cayenne’s colossal global success, Porsche has upped the ante of their most popular car by giving buyers a distinctly sporty Cayenne Coupe. 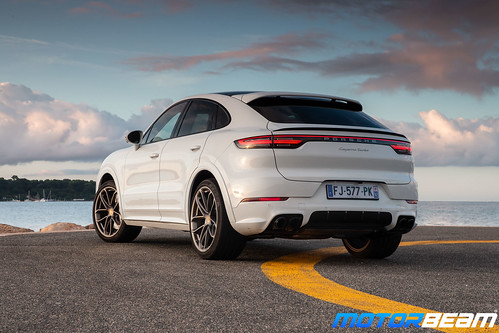 Exteriors – The Cayenne Coupe looks like any other SUV-Coupe. Meaning the front is the similar to the regular Cayenne save for redesigned bumper and air dams. It is a confident-looking front with a hint of sportiness. Like with Porsche SUVs, it does not give an impression of being bold, but rather, of being athletic. The headlights come built-in with Porsche’s now-signature quad-LED setup and there are well-shaped contours on the bonnet. Turbo models get more aggressive treatments to the front. 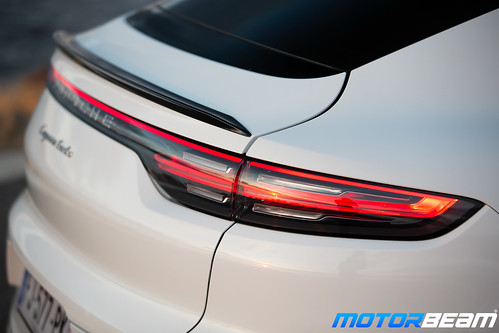 Move on to the side and this is where you realise that Porsche designers have done a fantastic job. It does not look awkward like the X6, thanks to the subtle curve at the rear. Porsche has cleverly chopped 20 mm from the regular Cayenne and made changes to the length. The result is the SUV-Coupe looks like a larger Macan from the side. Factor in the well-designed alloys, the Cayenne Coupe leaves little room for controversy. From the back, it is a typical Porsche. You also get an active spoiler but we think Porsche should’ve added the Panamera-style deployment mechanism to make it really cool.