Although using similar engines, the RS and RC 200s are vastly different to each other

Sibling rivalry isn’t new at Bajaj Auto because more often than not, its own bike tends to compete with another one of its own. Case in point being the Pulsar 200 NS, the big step up model which ended up fighting it out with the aged Pulsar 220. However, today, we are talking about a sibling rivalry which isn’t as conventional because the new Pulsar RS 200 takes on the KTM RC 200, these motorcycle not being from the same parent but are churned out from the same factory. The only hiccup in this fight between these full faired bikes being the price difference, the orange machine coming at a Rs. 40,000/- premium but is it justified?

Motor Quest: The Pulsar RS 200 was both launched and unveiled earlier this year while the KTM RC 200 made its world debut in 2013, being launched in India in the second half of 2014. Both bikes share quite a lot of parts between them. 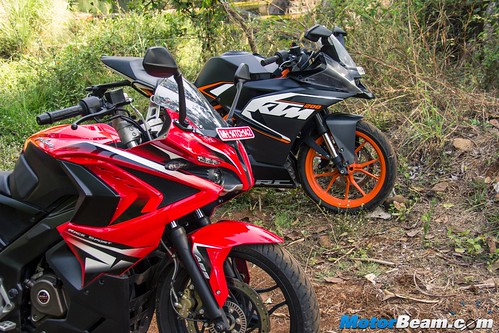 The Pulsar’s overdone fairing can be an eye-sore for some, the KTM looks proportioned

Styling – Both these motorcycles have some common design elements like the twin projector headlights which look quite similar in appearance too and the LED indicators which happen to be identical. Both motorcycles get LED parking lights which double up as daytime running lights and both these machines are full-faired. However, that is where the similarities end because these bikes are visually opposites. The Pulsar RS 200 looks overdone and has too much happening on its fairing while its floating tail light has become a matter of ridicule. 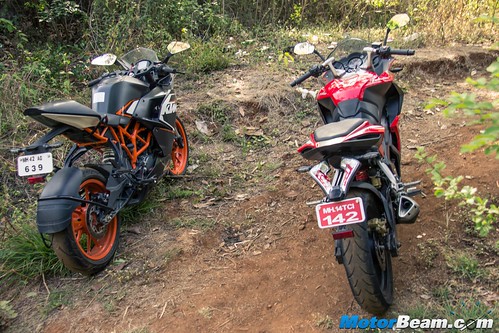 Oh no, that tail light, the KTM’s rear is infinite times better in design

When KTM launched the RC 200, many found it quirky but parked next to the Pulsar RS 200, the Race Competition machine looks like a beauty contest winner. The KTM’s design is just more soothing and while it still looks a bit evilish at the front, its smoother flowing body makes it look very well proportioned. The RC 200 also has striking elements like the orange coloured wheels, orange frame, underbelly exhaust, pillion seat which looks like a cowl and a sharp rear end, the tail light being very attractive on the raised rear-end. No denying the fact, the Pulsar might attract more stares for it is fresher but the KTM is easily the better looking motorcycle.

Instrument Cluster and Switchgear – While both these bikes share their switchgear (with backlit switches and good quality), their instrument clusters are poles apart. The Pulsar RS 200 has an analogue-digital instrument cluster while the KTM RC 200 uses an all digital unit. The Pulsar’s console is equipped with all the necessities like a clock, twin trip meters, side stand indicator, service due reminder, low battery warning, low fuel indicator, shift light and thankfully an analogue tachometer. The console on the KTM has everything offered by the Pulsar along with a gear position indicator, distance to empty, average speed, average riding time, distance to service, real time mileage, average fuel economy, etc. The RC 200’s instrument cluster just doesn’t shame the RS 200 but also bigger bikes. 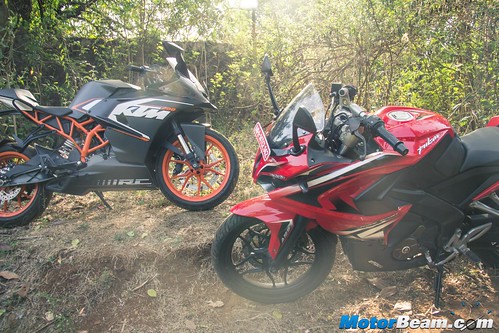 Ergonomics – Both these 200cc bikes subscribe to the ‘Race’ ideology as they carry the same in their name. However, these machines are very different as the Pulsar isn’t even close to as hardcore as the KTM. The RC 200 has a very aggressive riding position and that takes the toll on your wrists and back when you ride for long distances. The Pulsar has a more comfortable riding position, it’s quite upright (although not completely upright) and the raised clip-ons ensure you don’t lean in much. Thus, riding the Pulsar RS 200 for long distances isn’t an issue and the Race Sport Pulsar can also go touring with ease, something which is a tough ask on the KTM. Both bikes get similar grab rails which aren’t protruding out but the KTM also gets a handle on the right side between the rider and pillion seat. The Pulsar’s seat is more comfortable than the RC 200’s, the Bajaj bike also having better rearview mirrors. 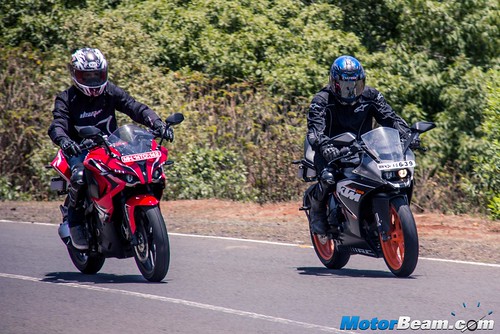 The Pulsar’s engine has linear performance, the KTM is outright crazy

Performance – Sharing many of their engine components, both KTM and Bajaj use a 199.5cc, single-cylinder, 4-valve, fuel-injected engine but the RC 200 makes do with a single spark plug while the Pulsar RS 200 employs three. The components in the engine of the RC 200 are much superior and thus it is able to produce more output, the KTM motor generating 25.34 PS at 10,000 RPM and 19.12 Nm at 8000 RPM while the Pulsar belts out 24.5 PS at 9750 RPM and 18.6 Nm at 8000 RPM. The output numbers do reveal half the picture but for the complete picture, one needs to factor in the weights of these machines, the KTM being a massive 11 kgs lighter. 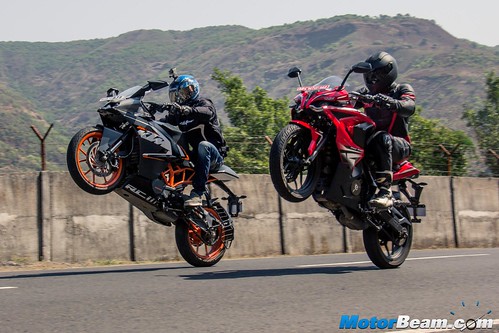 So when you line-up both bikes side by side and give them the beans, the KTM RC 200 leaves the Pulsar RS 200 in the dust, pulling a gap of 0.81 seconds to the ton, the advantage only increasing till the rev limiter of the Austrian machine kicks in at 10,500 RPM, at the speed of 137 km/hr. Meanwhile, the Pulsar keeps pulling to 152 km/hr, the rev limit being higher at 11,000 RPM. But in spite of a long stretch of road, the Pulsar simply can’t catch the KTM because the above speed numbers are on the speedometer. The real top speed of the KTM is 136 km/hr while the Pulsar is 5 km/hr faster, recording 141 km/hr on our VBOX. To cover the lead of the KTM and overtake it, the RS 200 does need a real long stretch of road. 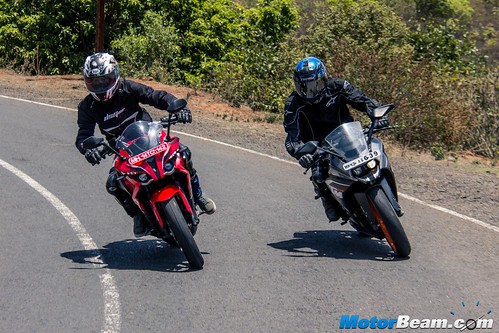 The gearing on the RC 200 is shorter while the Pulsar has longer ratios, thus the KTM is always on the prowl while the RS 200 makes its power in a more linear manner. The Pulsar is fast and fun but the KTM is just one up because it feels much quicker than it actually is. The RS 200 does sound better with its side mounted exhaust while the KTM engine offers better refinement, having lesser vibrations than the Pulsar. Both bikes use a 6-speed gearbox, the RC 200 offering more reassuring shifts. The Pulsar does beat the KTM when it comes to mileage, going 5 kms more per litre while also offering a bigger fuel tank by 3-litres, giving it a 150 kms longer range. 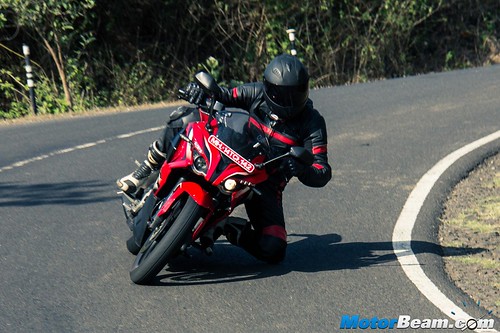 The RS scrapes its pegs, no such issue in the RC but the Pulsar has a better ride

Riding Dynamics – Bajaj has always managed to get a good balance of ride and handling on its bikes with the Pulsar RS 200 being no exception. Thus the ride quality on the RC 200 is no where close to being as compliant as the Pulsar. The KTM is stiffer than the Pulsar and with its upside down forks (the RS 200 uses conventional telescopic forks), the RC 200 transfers a lot to the rider. Meanwhile, the Pulsar tends to be much lesser affected by bad roads. It also gets front-channel ABS which the more expensive KTM misses out on. Thus braking performance on the Pulsar is more confidence inspiring. 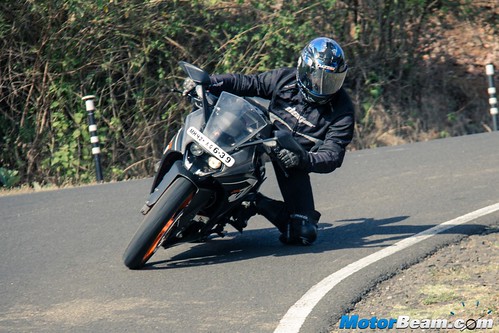 The handling of the RC 200 is super sharp, the KTM is a track tool

The KTM RC 200 is underpinned by a trellis frame while the Pulsar RS 200 uses a perimeter frame. The RC 200 is stiffer, lighter and comes with wider tyres, it also has a dedicated riding position with rear-set pegs. Thus, the RC 200 is the more fun bike to ride around the twisties. The Pulsar handles well but the RC 200 is easily superior, naturally tipping into corners and giving tremendous feedback to the rider to push even harder. Couple the terrific handling with the super fun engine and you have got a fantabulous riding machine which just makes you smile harder and harder with every mile. 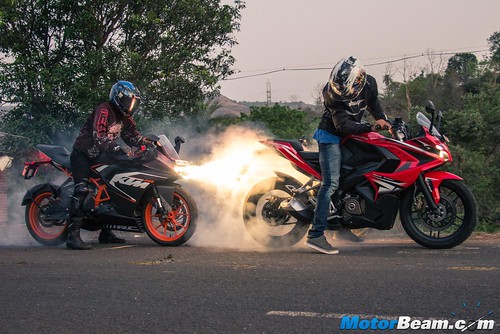 Burn it up! The Pulsar RS 200 offers a lot of bang for the buck

Verdict – The Pulsar RS 200 is quite the all-rounder, it’s fast, fun, handles well and has a good ride quality too. That’s not all, the Pulsar is also equipped with a front-channel ABS, has better cushioning of the seats and the riding position doesn’t tire you out. So is it worth paying the extra Rs. 40,000/- for the RC 200? For those not into hardcore biking, the Pulsar will suffice but for everyone else who wants the better motorcycle, the KTM justifies its higher price by offering you better performance, sharper handling, a more loaded console, superior quality and more stylish appearance too, the KTM RC 200 is therefore our pick over the fastest Pulsar yet.

The Pulsar RS 200 suffices for the first time biker while the KTM RC 200 is the motorcycle for the enthusiast. You can have enormous fun on both bikes but the Austrian machine is just the better product and thus the more expensive one too. 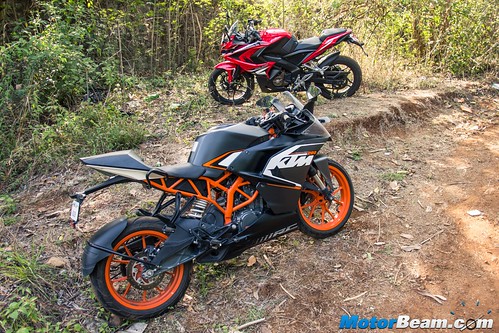 “The Pulsar RS 200 is an all-rounder but I would pick the KTM RC 200 any day because it just feels more superior to the Bajaj bike in most ways. The more aggressive riding position is something one gets used to with time and the stiffer suspension is more of a boon than a bane. The Race Competition machine for me, period.” – Faisal Khan, Editor, MotorBeam.
“The KTM is a lot of fun but one can’t deny the practicality offered by the Pulsar. The RS 200 is still fast and eager to corner and the taller gearing makes it fun to keep higher RPMs through the twisties. Most importantly the comfort is a big positive and one can tour on the RS 200, making me pick the Pulsar here.” – Hrishi Mandke, Pro Stunter.
“I really like the comfort of the Pulsar RS 200, its seating position is very good too and that seat offers good cushioning in front of the KTM. But the sporty looks and handling prowess of the RC 200 just pulls me to it. I would be happy with both bikes as both are very good machines for the price point but my heart pulls me towards the orange machine.” – Viraj David, Road Tester, MotorBeam.