Premium luxury SUV enthusiasts will have something to think and talk about in the coming weeks as UK-based Jaguar Land Rover’s iconic Range Rover family prepares to launch its fourth member in the line-up. The Velar as it will be known will be slotted in above the entry level Evoque and under the bigger Range Rover Sport. Now, the fact to ponder on is that why would this carmaker which already sells similar products in the segment under its other sub brands – we mean models like the Discovery and Discovery Sport under Range Rover or corporate siblings like the Jaguar F-Pace want to introduce a model that might clash or cannibalise existing products. At Norway, the idea behind the motive was made clear during the technical presentation which suggested that packaging, performance and marketing is what will set them all apart and hence none of the threats to each other in the lineup.

Motor Quest: Range Rover executives claim the Velar heritage began with the original prototypes of circa 1969 and that’s been the source of inspiration for the new arrival. 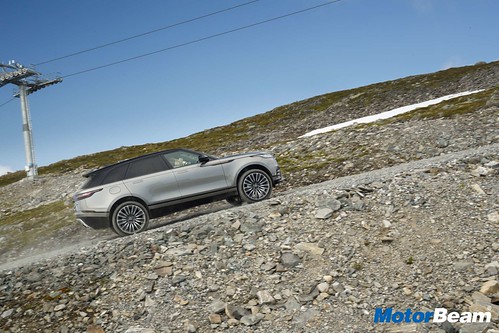 Exteriors – From the design stand point, the characteristic Range Rover brand features in the Velar include a floating roof, an unbroken waistline, soft rounded corners, and most of all, the trademark clamshell bonnet. Neat vertical cut lines are evident from the roof to the mudguards and panel gaps have been minimised. Even with its traditional profile, it has the capability to stand out and considering many of the rivals, the Germans especially who have adopted “coupe” styling for their sports SUVS. Actually, Land Rover designers must be commended in keeping with the brand ethos and established DNA despite having a clean sheet design. As promised in the concept Velar that was shown two years ago, the rakish sliding panoramic glass roof is standard across the Velar line. The unique feature in this car is the retractable door handles and newly crafted matrix LED headlamps which the manufacturer claims are the smallest units fitted to a Land Rover product yet. 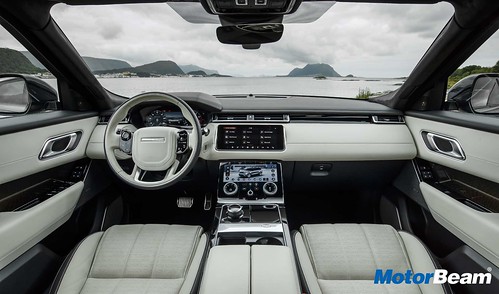 Interiors – Inside the cabin, the interior design and execution is the product of ‘reductionism’. The occupants sit high and the front view is pretty unobstrusive, thanks to the twist/kink design of the thick A-pillar from inside which allows better view. The Velar is also the first new vehicle that comes with the brand’s Touch Pro Duo infotainment system. Space wise, accommodation is generous for four adults. Cargo space is also good at 673-litres for this category of SUVs and there’s a lot of flexibility as far as space management goes. The 40:20:40 rear split seats come with heating and electric recline options. The optional four-zone climate control and cabin air ionisation system. 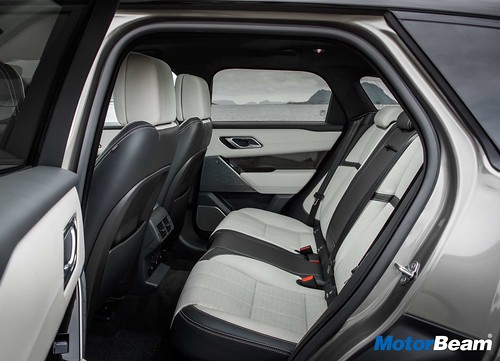 Comfortable seats accomodate four in the lap of luxury

The horizontal beam design of the instrument panel is central to the car’s interior while the driver gets twin-analogue dials with a 5-inch TFT display as standard from SE specification in higher editions a 12.3in interactive driver display that doubles up as a virtual instrument cluster. Material and trim quality is of high standards and interior designers have taken inspiration from modern architecture and combination of material usage. The test vehicles offered had seat upholstery woven from sustainable resources developed with the assistance of European textile manufacturer Kvadrat. The car’s Meridian audio set-up has been custom tailored to offer concert hall ambience through 17 or 23 strategically placed speakers. Actually this feature and the floating console reminded us of the new entrant from a Scandinavian manufacturer!