The Royal Enfield Continental GT is a modern cafe racer with emotional appeal.

Royal Enfield is known for making cruiser motorcycles but a quick dip into the history of this old brand will give you a glimpse of what all the company has done in its past. Circa 1960, the company launched the Meteor and Meteor Minor which were the first cafe racer bikes from the company. The Continental GT arrived in 1965 and soon the cafe racer cult saw a sharp following. However by 1985, cafe racer motorcycles were no longer in demand. Fast forward to 2010 and Royal Enfield made a splash by showcasing a cafe racer concept at the 2010 Auto Expo. A couple of years later, the production spec model was showcased and earlier this year, the bike was launched in the UK. After all this wait, Royal Enfield has finally launched the much awaited and highly anticipated Continental GT in the Indian market. We take a quick spin in warm and cosy Goa to find out if the Royal Enfield Continental GT strikes the right chords. 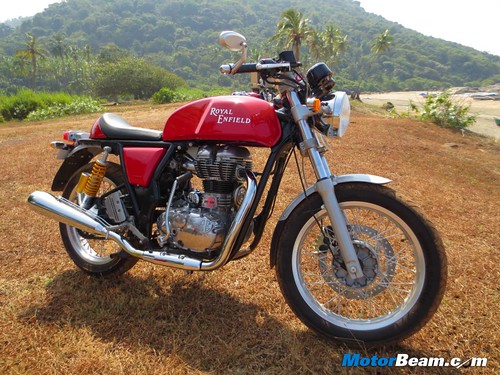 Royal Enfield has got the styling of the Continental GT spot on. When viewed in person, it looks the part and is quite an attention grabber. The company has remained true to the original cafe racer and the modern example flaunts the retro design elements proudly. The long tank, alloy spoke wheels, humped back racing seat and a sensation that the motorcycle has gone on a diet is immediately apparent. Fit and finish levels are very good too and it’s only when you observe very carefully do you find some rough edges. Paint quality is excellent and the Continental GT comes out of a new factory which has a modern paint shop which shows on the GT. The design will itself attract a crowd to RE showrooms as we witnessed on our Goa burn up, everyone turned and admired the Continental GT with eyes full of want. Few stopped us and inquired about the machine, such is the pull from the design alone. It does look like a piece of art in red while in yellow, it looks even more appealing. 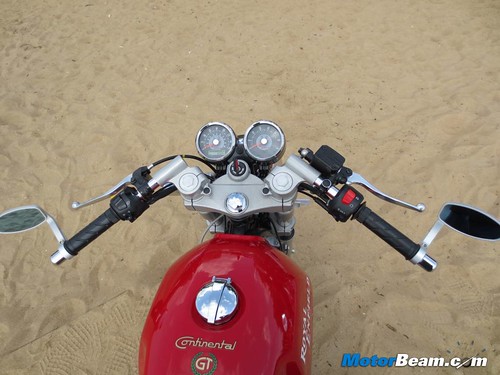 The Royal Enfield Continental GT gets a twin pod cluster with the left side housing the speedometer (marked both in km/hr and mph) and a small LCD screen with a digital display showcasing twin tripmeters, odometer and fuel level. The right pod is the tachometer and both the pods get a chunky chrome surround. The switchgear is familiar to other Royal Enfield bikes and feels good to operate. Our test bike was equipped with bar end mirrors which take a bit to get used to but once you get the hang of it, you will appreciate them. The mirrors have titanium dioxide coating on them but since it’s mandatory to have rear view mirrors with an 80 mm circular design, these are not standard. The optional mirrors cost Rs. 4000/- and the pillion seat is also optional (which comes with pillion footpegs). The Continental GT is registered and homologated as a single seater. 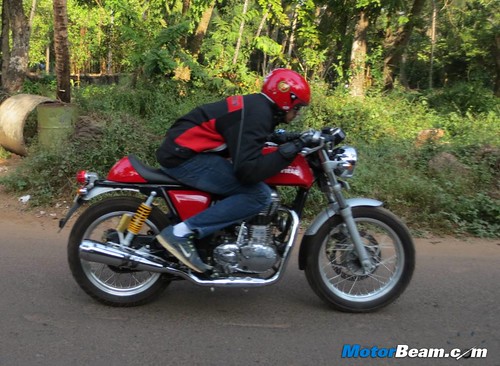 Royal Enfield claims the Continental GT is the fastest, lightest and most powerful motorcycle from their stable. Powering the flagship thumper is the same old engine which does duty in the Classic 500 and Thunderbird 500 but this one has been given increased capacity at 535cc with a bore up and ECU remap. The increase in displacement has also seen an increase in output which now reads 29.1 BHP of power at 5100 RPM and 44 Nm of torque at 4000 RPM. So the Continental GT isn’t very powerful considering the cubic capacity of the motor. It weighs a full 184 kgs so it isn’t very light either. Fastest Royal Enfield, definitely but not a very fast bike per se. However Royal Enfield will offer performance parts for those who want more juice out of their cafe racer. 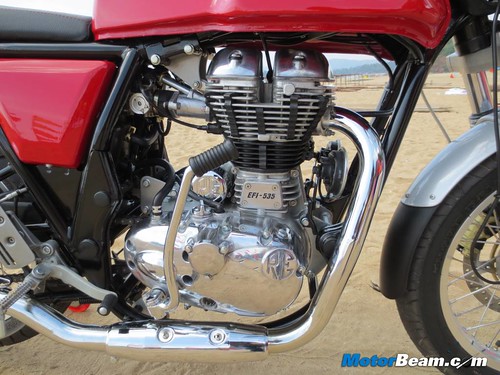 The problem lies with the motor which doesn’t offer the performance you would expect from a cafe racer. The single-cylinder mill has lots of flat spots in the bottom end of the power band and you need to rev the Continental GT a fair bit to get past this. The mid-range is fantastic and there is a definite pull between 2000-4000 RPM which is the meat of the powerband. Post 4000 RPM, the vibes are too much and the motorcycle redlines at a paltry 5700 RPM with a rough cut off and coarse engine sound. It does thump with aural bliss right from start, up to 4000 RPM. However our test bike had an exhaust which is part of the option list (costs Rs. 2900/-), the regular exhaust isn’t as loud. 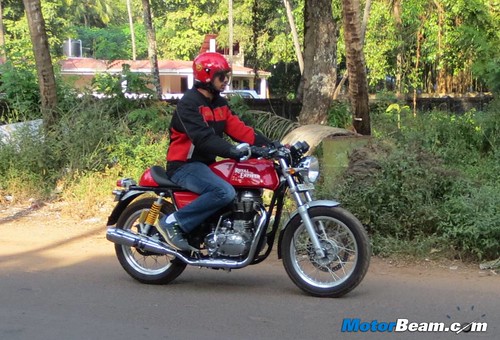 The single-cylinder engine has plenty of vibrations which hampers cruising

The Royal Enfield Continental GT reaches 100 km/hr in third gear and you can cruise comfortably at that speed in fifth gear with the tacho needle hovering around at 3500 RPM. The Continental GT reaches 120 km/hr easily and when pushed hard should show 140 km/hr on the speedo easily (real top speed is 135 km/hr). However the incessant vibrations post 100 km/hr can be felt through the handles, tank, seat and footpegs which hamper high speed riding. The gearbox is average and there are many false neutrals although the clutch is light and well weighed. Our test bike had done less than 300 kms and the vibrations should reduce post first service. One can expect a mileage of 27-30 km/l from this machine (ARAI certified is 41.9 km/l).

Armed with telescopic forks at the front, Paioli twin gas-charged shocks at the rear and tubular steel frame underneath (UK’s Harrison Engineering helped in the development) the Continental GT is a bit stiffly sprung which gives it good dynamics. Ride quality isn’t stiff but absorbent and there is no bounciness at speed. Straight line stability is excellent too and it’s really the super awesome Pirelli Sport Demon tyres which lend the Continental GT amazing grip through corners. Turn-in isn’t quick and the bike isn’t flickable which is expected but the Continental GT can be a lot of fun through the twisties and you will find yourself smiling in your helmet when you show it a series of corners. 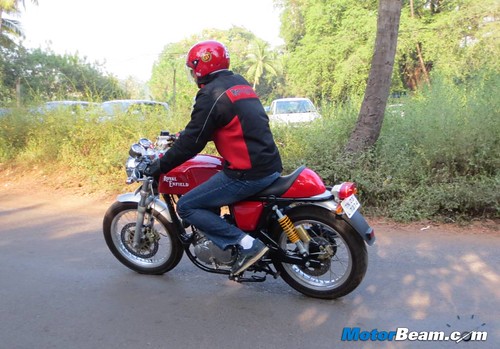 The Continental GT gets clip-on handle bars and the seating position is by far the sportiest of any Royal Enfield bike but the saddle is itself wide and the cushioning on the seats is on the softer side saving your derrière on long rides. The riding position isn’t aggressive and all this makes riding the Continental GT for long durations an easy task. The footpegs are a bit rear set but offer comfort. Armed with Brembo discs at the front and rear with steel braided lines, the Continental GT offers excellent stopping power and the braking performance benefits from the fantastic Pirelli rubber as well (100 section front and 130 section rear). 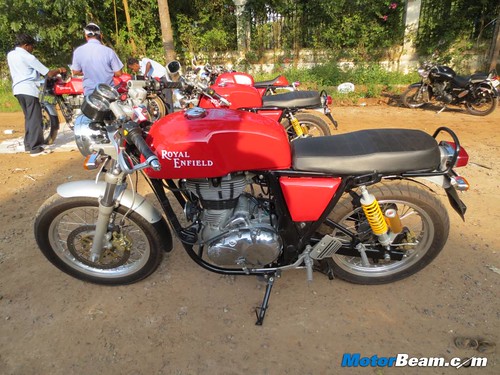 With the optional pillion seat and footpegs, bike doesn’t look as cool

The Royal Enfield Continental GT tries to pull your emotional strings with the riding experience it offers. It’s different and unique which will appeal to a very different set of riders. Considering the hardware, the Continental GT is priced very attractively and that makes it a very good buying proposition. 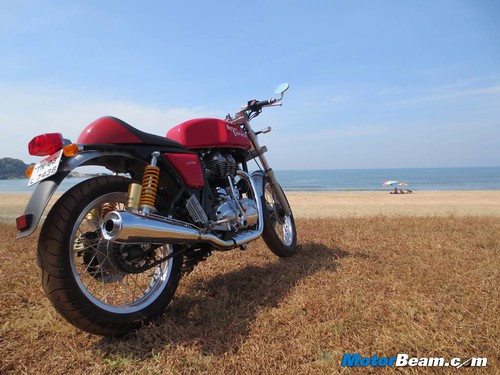