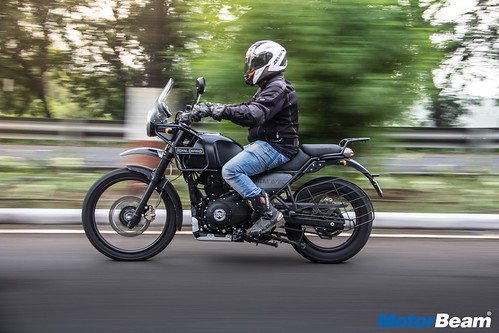 With the inclusion of FI, the kick starter is a thing of the past

Performance – The Himalayan FI ditches the carburettor and utilises a fuel-injected version of the familiar 4-stroke LS410 engine, producing the same 24.5 BHP of power at 6500 RPM and 32 Nm of torque at 4250 RPM. This 411cc single-cylinder motor comes mated to a revised 5-speed constant mesh gearbox and the talking point of this combination is undoubtedly the tall gearing. The Himalayan FI feels at home while tackling the rough patches due to its versatile 1st and 2nd cog. True to Royal Enfield DNA, there is plenty of torque available lower down the RPM range which helps the drivetrain pull 191 kgs of mass without a sweat. While the power and torque figures are unchanged, the addition of fuel injection has given a slight boost to the low-end power delivery and the motorcycle feels more eager at the lower spectrum of the RPM range. Precise fuelling has also ensured that the mid-range is as strong as it was on the carburetted Himalayan, thereby lending the bike an enjoyable character on city roads. However, the power tapers off drastically as you approach the redline. 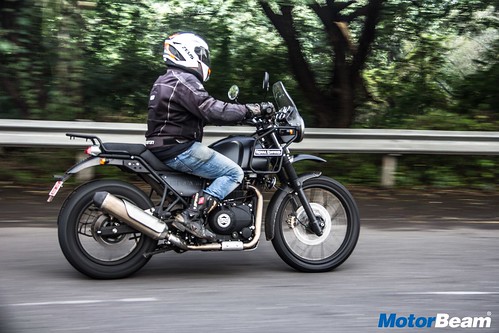 The iconic thump has been replaced by a muted and refined thrum!

There is a lot of action in the mid-range, where the engine also feels responsive

The engine refinement has gone a few notches up and the Himalayan is more frugal now returning almost 32 km to a litre. However, engine noise and vibrations become prominent when the needle crosses the 4000 RPM mark. If you push it, the engine will hit the 8000 RPM mark also but the meat of the matter lies in the mid-range. While the Himalayan was never meant to be a tarmac scorcher, the addition of FI has made it quicker in the 0-100 km/hr dash than before, reaching there in 10.95 seconds as per our VBOX tests (the carb model clocked 11.11 seconds on our VBOX). The improved gearbox offers seamless shifts but, despite Royal Enfield claiming to have also addressed the hard-clutch issue, the clutch action will still take some getting used to. There were multiple instances of hitting false neutrals during our road test which implies that the gearbox still needs some fine-tuning. 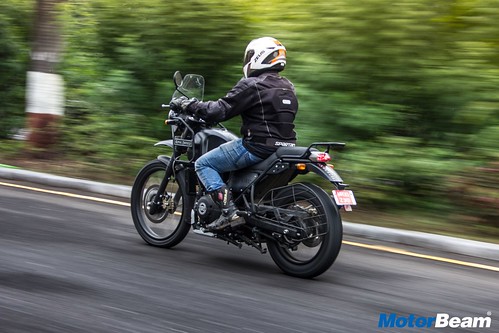 Riding Dynamics – The Himalayan FI uses the half-duplex split cradle frame which provides it sorted riding dynamics over varying road conditions. On the tarmac, the sheer weight of the motorcycle makes it immune to crosswinds at triple-digit speeds. Off the road is where the Himalayan FI comes out with flying colours. The front telescopic forks come with 200 mm of travel to gobble up broken patches while the motorcycle is stiffly-sprung at the rear to aid control and handling. On cornering, the rider must be prepared for some heart-in-mouth moments at times due to the soft front suspension. The Himalayan FI uses a 300 mm disc up front and a 240 mm disc at the rear. While braking performance is adequate considering the lack of ABS, the kerb weight of the motorcycle is on the heavier side which hinders confidence. 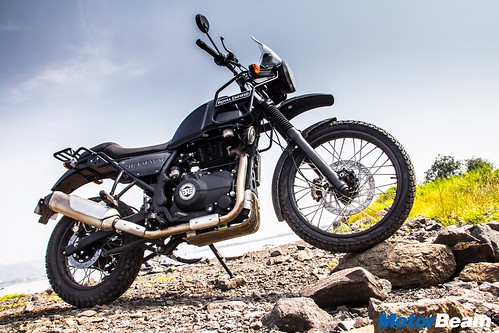 The Himalayan FI is fairly practical as a daily ride also

Verdict - The carburetted version of the Himalayan was plagued with multiple quality issues which brings us to the conclusion that reliability from the Royal Enfield Himalayan FI still remains a question mark. While the automaker claims to have addressed the problems, one can never be too sure with a brand that has never been associated with reliability. While the product has seen improvements in refinement and build quality, there are a lot of rough edges. Due to its sticker price and limited competition, this adventure-tourer fits the bill perfectly for many enthusiasts who have been eyeing for an affordable purpose-built adventure tourer. However, we would suggest to wait it out and comprehend the market response over the next few months before plonking your hard-earned money on such a versatile package that the Himalayan FI is. 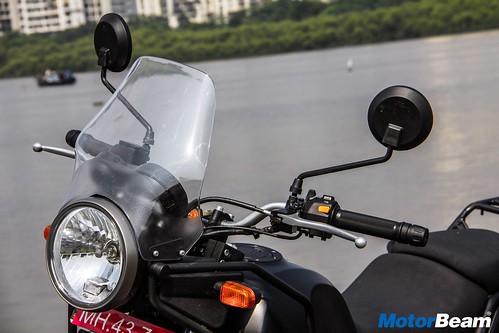 It’s really difficult to differentiate the Himalayan FI from its carburetted avatar!

Whats Not So Cool

Thunderbird 500 vs Mahindra Mojo vs Honda CBR250R vs Himalayan