The Suzuki Gixxer has proven itself to be the most fun player its segment, it’s a hoot to ride

It could be said that Suzuki has finally achieved to place itself on the top of the 150cc segment since its compatriot competitors have dominated it for nearly a decade. The Suzuki Gixxer; a completely different machine derived from the older, GS150R platform; has pretty much succeeded in keeping Suzuki’s name to its reputation after years of mere survival in the fierce Indian commuter motorcycle segment. It has managed to lure the youth once again towards the brand. Although not marketed much, the bike’s sales figure does pretty much speak for itself as more than 5000 units are sold every month (sales have peaked to 10,000 units in some months). Its pricing could be attributed towards the tremendous success it has had to keep up with its rivals, especially the Yamaha FZ. We at MotorBeam, have had the pleasure of riding the Gixxer for a good part of 2015. With close to 10,000 kms clocked, the Gixxer surely has earned a special place in our hearts. 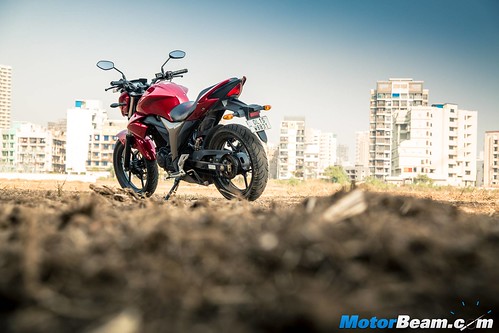 Talk about long rides, short ones, city commutes and even a little off-road action, the Gixxer is all up for it. It’s astounding how a bike primarily designed for commuting can perform so well under versatile conditions! To begin with, the engine never feels breathless no matter how you treat it. Its butter smooth operation even after top speed runs may leave you in awe no matter how much beating it takes. Yes, we mean refinement. And not just ordinary refinement, we’re talking typical Japanese quality, if you know what we mean. With unbelievable mileage figures of 42 km/l, the Gixxer is definitely ‘enjoyably’ economical than the Yamaha FZ. But let’s get back to that a little later. The 155cc mill puts out a sweet 14.8 PS of power. What is unbelievable is the mere 14 Nm of torque which pushes the bike so quick that one may actually underestimate its mentioned specs! 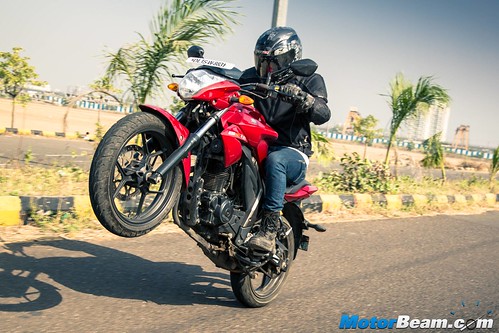 Thanks to the super responsive clutch, wheelies are a piece of cake!

Coming to the suspension system, Suzuki has managed to keep the Gixxer’s setup not so much at par with the rest of the bike, but still does the job well. The ultimate test of a bike in India is, well, how it performs on the roads here. The potholes are absorbed only up to a certain limit. The shocks are felt easily which could also be due to the hard seat; it takes a toll on the rider on a 30 kms+ ride. The front forks however have a good travel and complement very well with the good brakes, although the stopping power could be better, more so at the rear. 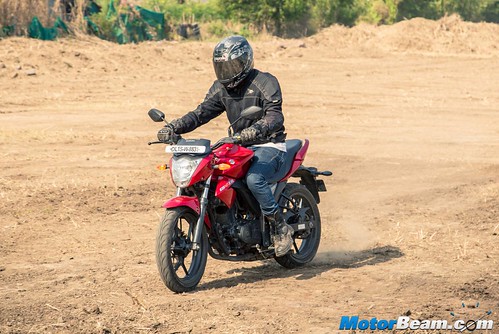 The front 266 mm disc have the bite that is virtually lacked by other bikes in this segment. Along with the brilliant MRFs, the Gixxer stops quickly and safely. The disc brake on the front-end being so good, however, does not compensate with the drum on the rear wheel. As we’ve stated in our earlier reviews, a rear disc should have come as standard, or at least as an option on the faired version, the Gixxer SF. Anyway, this being the Gixxer report, let’s forget that for a while and take a moment to the absolute cornering machine the Gixxer is. 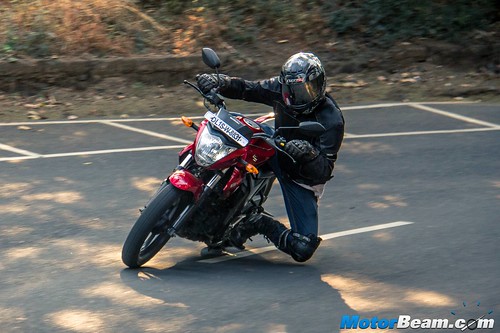 Braking late and leaning in quickly, the Gixxer feels like home just around the corner

Despite being a naked bike, the Gixxer feels quite planted on the highways

The Gixxer leans into a corner with so much ease that a foot-peg scrape on the bike is just like a walk in the park. High corner speeds with steeper lean angles is what characterises the Gixxer. The stock MRFs may not be the stickiest set in the market, but the brilliant weight distribution on this bad boy inspires confidence into a corner like no other. And the directional change on the exit is like a deer on the run. With a kerb weight of just 135 kgs, it’s easy to tackle chicanes. Coming back to the earlier mentioned foot-pegs, the lower set pegs are a very minor but a little annoying problem. 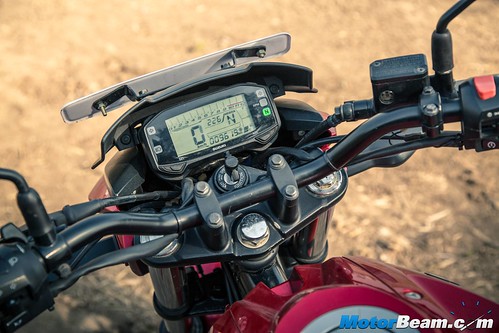 However, since the bike is primarily meant to be ridden on the road, and taking rider comfort into consideration, the foot-pegs are satisfactorily placed a little lower rather than being placed biased towards the front. Such a position of the pegs is a good compromise between comfort, practicality and a sporty feeling. The ergonomics are pretty okay compared to the other bikes in this segment. The not-too-high but not-too-low handlebars are again strategically designed to keep handling and comfort of the bike at optimum. The seat, however, as mentioned earlier, could have been a little softer. A short commute of even a 30 kms can take a toll on the rider and create fatigue in the hips. 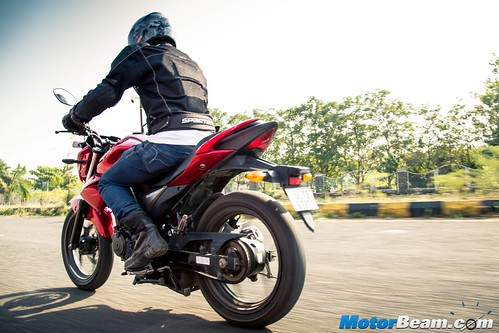 With the refined and responsive engine, cruising on the highways is fun

The pillion seat is pretty wide, but again, it could have been a little softer. The slope of the pillion seat also makes the pillion slide ahead every time under medium to hard braking. The grab rails provide a good grip but aren’t suited for mounting and fastening luggage by bungee cords. Another noticeable design flaw is dirt smearing in the monsoons despite the factory fitted mudguards. Without the mudguards, the rider’s back is also smeared by dirt. The dirt also obscures the tail lamp which is a potential hazard despite the bright LED tail lamp. The bike’s comfort could be rated as ‘average’ on long rides owing to the fact that the engine is unusually loud, although not noisy. 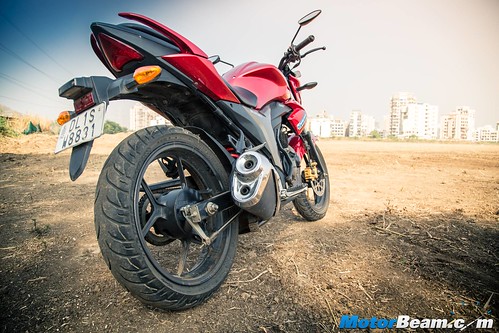 The stylish muffler is a fascinating addition making it stand out from the rest!

One peculiar problem that exists with the Suzuki Gixxer is the harsh and the noisy gearbox. Initially, the harshness was thought to be due to the bike being new, but it persisted despite repeated complaints to the service centre. Another unsolved problem is the lack of sufficient ground clearance. Even with the lightest of riders, the bottom of the bike does scrape at speed breakers. The headlamps are satisfactory; although, we do believe 55W bulbs would have been better than the current 35W especially for Indian conditions. The switchgear quality is standard and is pretty much the same used on other Indian bikes. Our long termer also showed increased consumption of engine oil over a period of time which is unusual and therefore had to be topped up or replaced every 2500 kms. 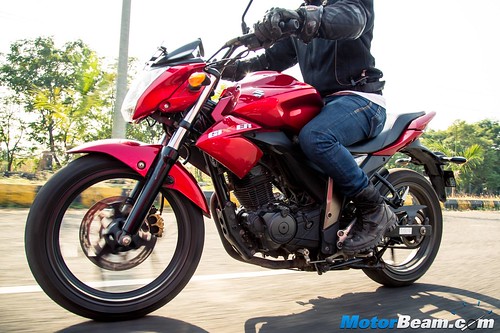 All in all, the Suzuki Gixxer is a very strong contender in the ever going competition in the 150cc segment. It is all that the Yamaha FZ V2.0 (which basically upped the 150cc segment game in 2014) should have been. The Gixxer is a proven winner in terms of performance, economy, handling and pricing as compared to the FZ. The quality you get at just Rs. 90,000/- (on-road Mumbai) is not bad at all. The Indian market couldn’t have been blessed any more with the arrival of this game changer, and we at MotorBeam are proud to have had the honour of spending so much time with this wonderful machine.

The Suzuki Gixxer is just the kind of street-fighter that India needs. With decent mileage and superb performance, overlooking a few glitches and shortcomings, full marks to Suzuki for finally getting a bike right for our country! 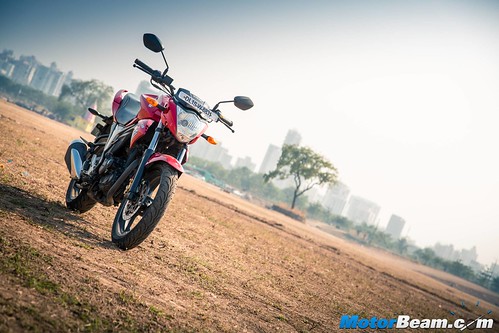 The Gixxer seems to be always looking out for new adventures