To determine the ‘best sub-500cc tourer’ we rode the Royal Enfield Thunderbird 500, Royal Enfield Himalayan, Mahindra Mojo and Honda CBR250R from Bangalore to Ooty and back. The route included city traffic, dead flat stretches, sharp curves, high gradients and hair-pin bends; which means we have covered almost all kinds of tracks a regular rider comes across. Not just tarmac but the weather was also little challenging as it was drizzling in Ooty, hence we got better insights while testing the bikes on cold slippery curvy roads.

Motor Quest: The Honda CBR250R is the oldest bike here and was launched in 2011 followed by Royal Enfield Thunderbird 500 in 2012. The Mahindra Mojo entered the market last year while Himalayan rolled out just a few months ago. 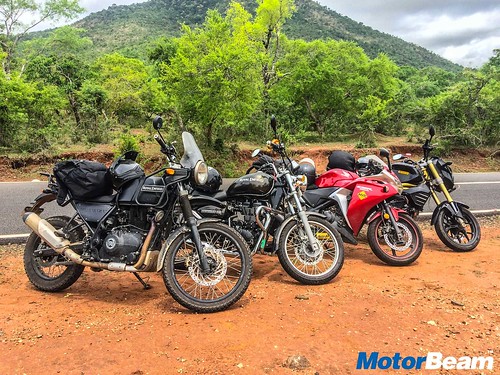 The Japanese design is edgy while the Indians are pragmatic

Styling – Massive proportions, raw finish and seating position certainly gives the Himalayan a very sturdy look. Being the first affordable adventure tourer in the country, the Himalayan has good road presence. On the other hand, the charm of Royal Enfield clearly reflects on the Thunderbird; whilst the latest paint schemes gives the bike a majestic appearance.

The Mahindra Mojo has not got anything impressive when it comes to looks. Stand-apart features like the dual headlamps and exhausts have failed to sizzle. The Mojo looks nothing more than a common bike. The Honda CBR250R is undoubtedly a good looking bike, thanks to the smooth fairing. The hybridisation of VFR and CBR bloodlines gives the baby Fireblade a fitting look however the latest decals are not up to the mark.

Instrument Cluster – Though the Thunderbird’s instrument cluster is loaded with lots of features, it is not that impressive as the tiny signs are tough to read. The CBR and Mojo have similar instrument clusters but the one in the Mojo is marginally better because of the digital console. The Himalayan’s console put the rest of the three to shame as it offers plenty of information. Neatly distributed gauges comprising of digital compass and thermometer, hazardous indicator, simultaneous display of ODO and trip meter (also available in the Thunderbird) and contrast colour combination puts the Himalayan on top of the table. 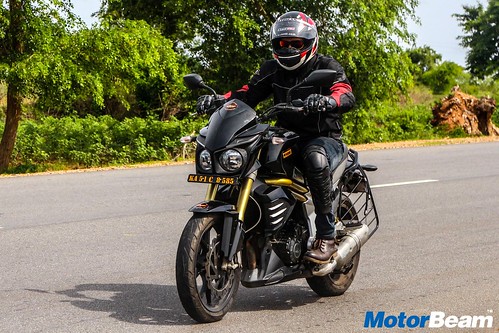 Mojo’s curvy pillion seat could cause distress during long hauls

Ergonomics – The Mojo and Thunderbird have relatively similar riding postures, which is the standard tourer one. Undoubtedly long distances can be done without putting up much efforts but there are few differences in both of them. The Himalayan’s high ground clearance with handlebar position justifies it is an adventure tourer. The Himalayan is ruled out for short riders because of the same but for others it works out to be fine. Coming to the CBR250R, its riding posture is much different compared to the other three. The riding posture serves both city riding and highway touring. The crouching position may not be preferred by everyone. 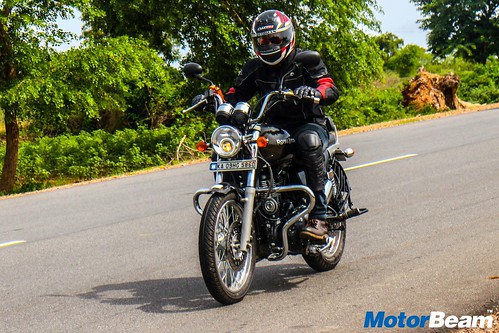 The Thunderbird 500 has got the best pillion seat

Performance – The 163 kg Honda CBR250R houses a numerically scaled down CBR1000RR engine which produces 26 PS of power and 23 Nm of torque. Because of shorter stroke and its positioning as a sports tourer, the maximum torque is available on the higher speed band. This torque delivery is favourable on plain stretches but not on curvy tarmac. Mahindra’s 295cc liquid-cooled motor churns out 27 PS and 30 Nm . The mid-range torque is strong for it can be estimated that the Mojo’s engine can yield CBR’s equivalent torque somewhere at 4500 RPM only. Sighting the same reason, the 165 kg cruiser requires less number of gearshifts while encountering different terrains.

The Indian adopted British company made sure it put in all effort in developing the new 410cc engine. The single-cylinder air-cooled engine grunts 24.5 PS and 32 Nm that catapults the 182 kg robust Himalayan. The new engine behaves similarly to the 350cc one in terms of power and torque delivery; meaning the torque delivery is just enough but tops out a bit early. The engine does its job effortlessly as long as it is operated in the low and mid-range. The oldest and the largest mill of all, the 500cc fuel injected engine churns out a maximum of 27.2 PS and 41.3 Nm. The 195 kg Thunderbird (adapted the mill from the Classic 500) easily glides because of the massive torque. The engine does an excellent job in power and torque delivery.

Noise, Vibration & Harshness (NVH) and Exhaust Note – NVH plays a major role in deciding the ride quality of a vehicle. The Thunderbird 500’s exhaust note is undoubtedly loved by almost everyone but when it comes to NVH the bike’s performance is not up to the mark. Engine vibrations and poor part quality kills the thrill of riding. Fatigue is induced into the body, thanks to the resonance. 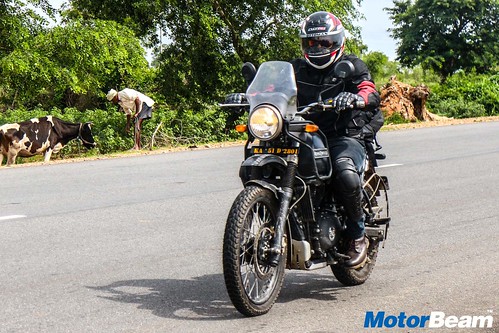 The Himalayan is the most practical bike of all

The Himalayan carries a refined engine and has got a unique exhaust note. The Himalayan sounds like any other bike at lower engine speeds but sounds great at higher engine RPMs. However as the engine nears redline, one can observe harshness but we believe that most of them should be fine with it. Backfire from the exhaust system is pretty much evident. As a Royal Enfield, the Himalayan is good but when put against Honda and Mahindra ,it gets beaten out without giving tough competition (in this segment).

The CBR houses a highly refined and butter smooth engine which provides the rider a world class experience. It has got a simple exhaust note but the grunt can be heard when the engine is running in higher speeds. One just need not have a concern when it’s a petrol Honda. Half a decade of engineering was invested in developing the Mojo’s engine, and the work is truly commendable. At the handlebar, there is little or no vibrations even though the engine is running at higher RPMs. The 295cc mill somehow proved to be better than Honda’s quarter-litre engine. The expensive dual exhausts do the job as the Mojo records the sweetest sound of all. 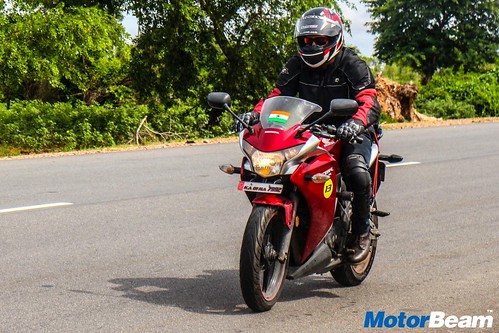 Riding Dynamics – The Thunderbird 500 is a heavy bike and for the inertia, it is difficult to steer at high speeds but the handling is decent at lower speeds. Astonishingly, we found it relatively easier to steer it than the Himalayan in tight corners, thanks to the seating position. When it comes to braking, the bike though equipped with discs, does not meet expectations. On the other hand, the weight distribution on the Himalayan is good but it also faces similar issues of cornering because of the higher centre of gravity. On highways, the Himalayan is pretty stable and is easier to flick when compared to the Thunderbird. The braking in the Himalayan feels much better while the CEAT tyres ensures that overall handling meets expectation. 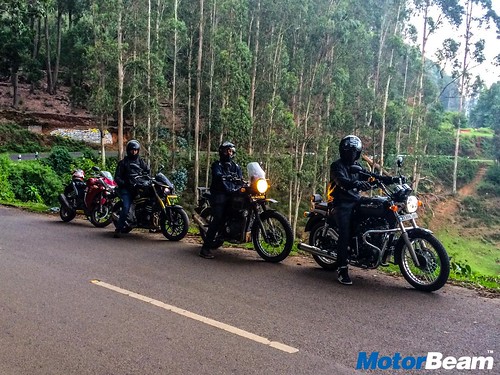 For a tourer, the Mahindra Mojo is a good handler. The comparatively light weight and lower centre of gravity gives good confidence to push the bike hard. The headlight assembly’s mass on the handlebar column combined with its riding position kills the cornering instinct. Though backed up by Pirelli tyres, the braking is a disappointment. No need to say that the Honda CBR250R is the best handler of all; not just among the four but also in the sub Rs. 2.5 lakh segment (when KTMs aren’t considered). The sporty seating position along with its lower weight ensures that the bike can be flicked at any speed. The CBR250R is extremely fun to ride in curvy tarmac but requires more gearshifts due to lack of low-end torque.

Verdict – The Thunderbird 500 might have been one of the best tourers in the country but not anymore. The build quality and NVH issues keeps this Royal Enfield out of contention for the number one spot. The Himalayan does stand up to its name and has all abilities to conquer the Himalayas. It is certainly the best from Royal Enfield’s stable but because of the pure off-roading DNA, the bike fell short in meeting the requirements of a regular ride cycle. Hence the quest of becoming the best sub-500cc tourer comes to an end for this raw beast.

Both the Honda CBR250R and Mahindra Mojo have emerged on top in various departments, but there has to be just one winner. The Mojo just manages to pip out the CBR250R to win this shootout. Top notch hardware, broad torque band, higher fuel tank capacity with decent handling capability makes the Mojo the ‘best sub-500cc tourer’ but only just. If Honda brings the CBR300R to India, we all know who would be the new touring king. 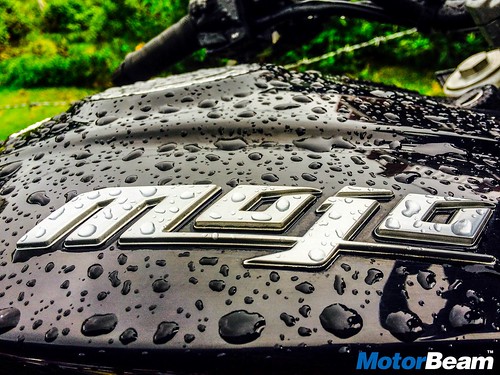