TVS is the third largest two-wheeler manufacturer in India

TVS is one of India’s leading manufacturers when it comes to making motorcycles. The TVS Apache is quite a popular name especially when you remember all the racing DNA they talk about. Where does all this DNA come from? Well TVS has had 35 years of racing experience, starting all the way back from mopeds. Yes, that’s right, back in 1982 a TVS Group company named Sundaram Clayton raced it’s 50cc moped, clocking an impressive 105 km/hr. This sparked the fire that we now all know as TVS Racing. The spark was first ignited in the year 1987 when it came into existence and won the Great Himalayan Desert Rally with an AX 100 the following year. 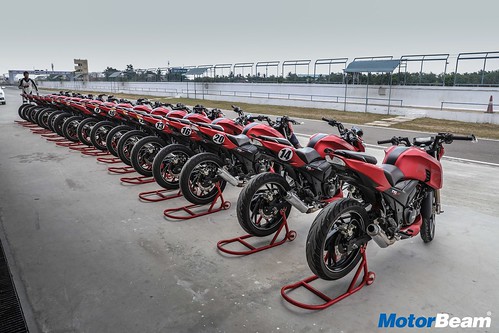 After the development of 5-speed gearboxes in 1990 and a few more rally iterations, TVS started scheme bike racing in India during the year 1993. 1994 to me is probably the big bang for motorcyclists in India as TVS was the first to launch One Make racing in our country. Hop forward to the year 2000 and the 4-Stroke era began. TVS kept going as they won more Rally, supercross, and Road Racing titles. It’s seven years from now that the racing DNA was first introduced to us with the RTR series being launched. Taking this DNA and legacy forward, TVS steps into Dakar, becoming the first Indian factory team to participate. 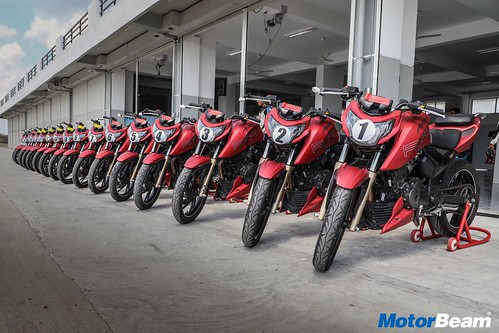 All dressed up and nowhere to go? Not today!

Conquering almost every championship in their way with an unbeatable win rate, Dakar was finally conquered too, being the first but surely not the last Indian to do so. The reason I gave you this quick walk down memory lane is that literally, no other Indian manufacturer has such a rich racing heritage. As a rider, I knew I was going to the right place to sharpen and polish my skills. Let’s not forget the pride it brings me to see TVS take our country forward. Now TVS had no way to share this experience with us up until the introduction of the Young Media Racer program. 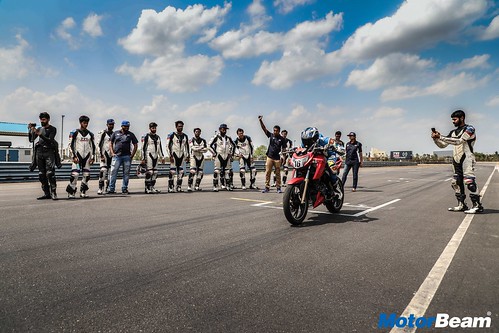 The Young Media Racer program is TVS’ way of unraveling everything that a racer must go through. As a member of the program, you’re trained, taught and educated about racing just like any other racer. No quarter is spared when it comes to getting down and dirty on the track! We were welcomed by Chennai’s hot and humid weather, where the clouds were ambiguous and so was the weather. It went from cloudy to sunny faster than I went around the track, I guess that’s saying something. The track was all empty once we got there and it was just us and the TVS racing team members. We headed straight for class and began with our introductions and safety briefing.