The latest facelift gets substantial changes to the XUV500, specially the aesthetics

Mahindra keeps updating their product portfolio quite frequently but the latest update to the Cheetah is a big step ahead, which makes it look more premium inside out. However, the changes are not only limited to the looks but also mechanicals and feature list. We take the revised XUV500 for a spin at Mahindra’s own test track to see how big the improvement is over its predecessor.

Motor Quest: Launched in 2011, the Mahindra XUV500 has been a big volume spinner for the Indian automaker. The key highlights of the success of this monocoque SUV are styling, space, ton of features and presence on the road. This is the second facelift of the model since its launch. 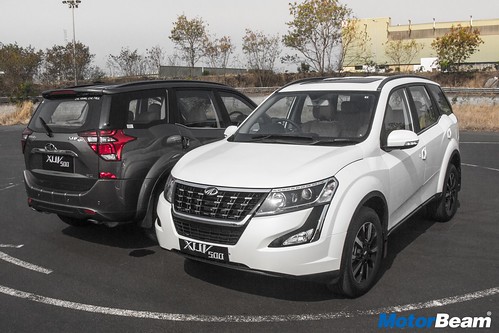 Exteriors – Considering this is a facelift most of us would be expecting prominent changes to the front fascia but Mahindra has gone the extra mile and even updated the rear profile of the car. The front-end gets a revised chrome embellished grille flanked by projector headlights on either side. The headlamp unit sees minor tweaks and the S-shaped LED DRL has made way for a contemporary almost horizontal strip. The bumper with the fog lamps housing remains similar to the pre-facelifted XUV500 but there is a chrome strip that separates the upper grille from the lower air intake. 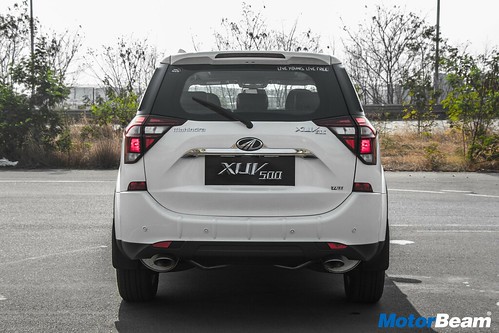 The 2018 XUV500 looks imposing; is a more desirable package now

Get to the sides and you will notice that except for the alloy wheels and roof rails nothing much has changed. The top end W11 trim gets a swanky-looking 18-inch diamond-cut alloys while the W9 gets 17-inchers (not diamond-cut ones). At the rear, the most prominent changes are the wedge-shaped tail-lights (with different graphics inside) and the revised tailgate. Reflectors have moved away from the tail-lights and are placed in between the tail lights and the bumper. There is a roof spoiler too, which Mahindra claims, adds to the aerodynamics of the car. Mahindra has introduced two new colours – Mystic Copper and Crimson Red. Overall, the facelift for the XUV500 will keep it afloat in the Indian SUV market until 2020, which is when the next-gen XUV500 will be launched. 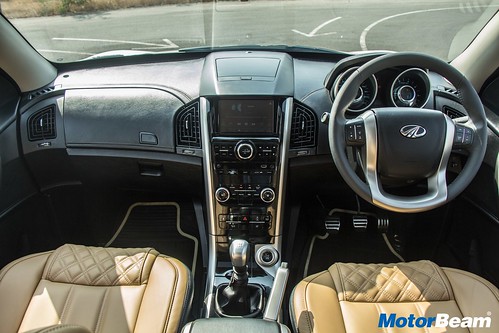 The tan leather instantly lifts the mood of the interior theme

Interiors – The cabin of the facelifted XUV500 gets subtle tweaks too. While the dashboard layout and the steering wheel are identical to the previous model, the centre console now gets a piano black finish (instead of the matte finish) and there are silver finishes around the centre console, gear lever, handbrake lever and on the steering wheel which uplift the ambience. The 4-spoke multi-function steering wheel and the instrument cluster are similar to the previous car but Mahindra has added faux leather trim (on the dashboard and door trims) and tan-coloured leather seats on the top spec trim of the 2018 XUV500. However, the lower variants get fabric upholstery. In terms of features, you get automatic climate control, rear AC vents (pillar-mounted), cruise control, electric sunroof, 8-way power adjustable driver’s seat, ARKAMYS 6-speaker Sound system, automatic wipers and headlights, puddle lamps, push-button start, Android Auto (No Apple CarPlay), rear parking camera with dynamic assist and sensors. The Mahindra Blue Sense app can now be operated with Apple and Android smartwatches. 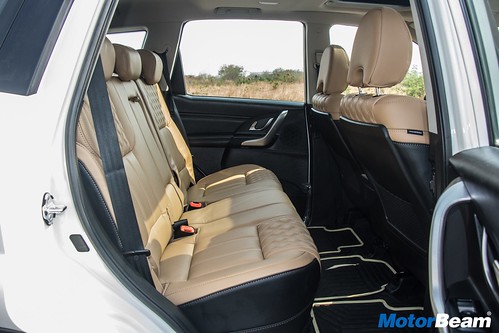 Space inside the cabin continues to remain the same. Both the front seats are big, wide and comfortable enough for accommodating two at the front seats and three at the second-row seat. The third-row seat is clearly best suited for kids as legroom is a constraint. Boot space is also negligible when all the seats are up but fold down the third-row seats and you get access to 703-litres and if you want to move in a bicycle or an average sized refrigerator, fold down the second-row seat and then you get a massive 1512-litres of boot space.