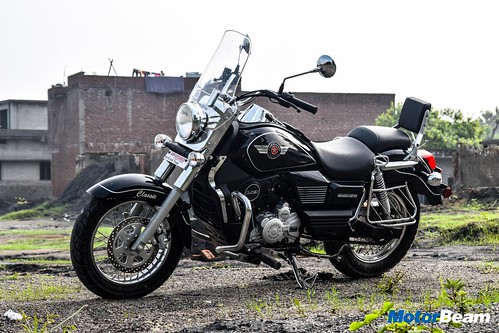 The riding posture is comfortable but eventually strains your back

Ergonomics – The UM Renegade Commandos have an easy going riding posture with little or no strain on your wrists. Pillion comfort too is on the higher side as the seats having a decent amount of cushioning and even a backrest for the pillion. While the suspension is stiffly sprung but with a pillion and luggage on board, the suspension felt comfortable and more compliant. The motorcycle comes with an astonishing 18-litre fuel tank ensuring lesser fuel stops. 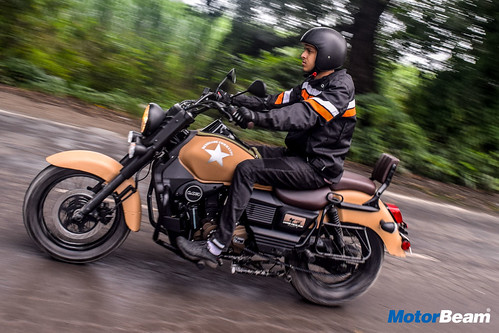 There is something cool yet subtle about this color

Performance – Both the Commando and the Mojave come with the same free-revving 279cc single-cylinder engine that makes its peak power of 25 BHP at 8500 RPM and peak torque of 23 Nm at 7000 RPM. The engine redlines at 9000 RPM which surprisingly is high revving and un-cruiser like. It’s clear that this motor has been designed for the highways as it is smooth and linear but still feels like it could do with more refinement. The vibrations are more evident when the bike is in its powerband i.e. at the higher revs. The exhaust has a decent sound to it too and gets better as you rev hard. 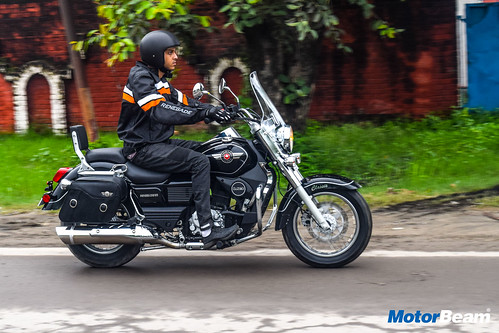 The windshield does make a noticeable difference in wind protection

The gearbox is very smooth but it tends to have lots of false neutrals going from second to third and third to fourth gear. However, it remains fun to shift without being much clunky. The power surge is linear and only tends to get exciting only at the top of the rev range. The throttle response is decent and the Renegade Commandos are apt for the highways as they lack the usual choppiness found on rivals. I somehow can’t seem to get over how fun it is to rev this engine all the way to its redline but sadly I can’t even see it. Thankfully this motorcycle doesn’t end up feeling like a slouch and can keep its pace but you need to keep that throttle wide open. 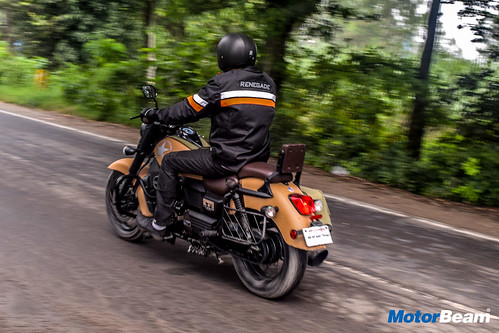 These UM motorcycle feel agile and easy to manoeuvre

Riding Dynamics – In terms of handling, the UM Renegade Commando Classic and Mojave feel agile once you get going and stay surefooted at cruising speeds. However, the front weighs up and the bike does not flick much at higher speeds. At 179 kgs, this machine is lighter than its rivals and it feels more confident around the corners. It gives you a sense of confidence to lean and go fast without worrying about the ride getting unsettled. When you start to dip in for a corner, there is very little weight that’s felt and it holds the line as you unwind the throttle mid-corner. 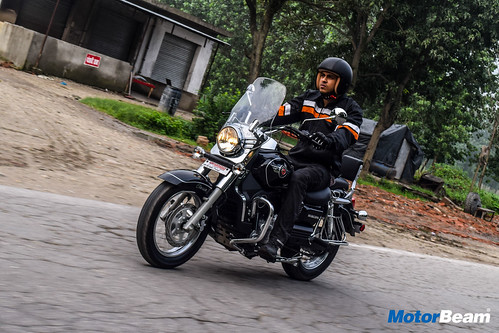 The combination of leather and chrome never feels overdone

The suspension set-up is great for highway cruising speeds

The TVS tyres offer decent grip but what puts it off is the fact that it has a 280 mm front disc and a 130 mm drum at the rear. While the front brakes have a gradual bite, the rear ends up feeling a little spongy and lacks the initial bite. It won’t matter much while you’re in tight traffic but out on the highway where you’re relying on your rear brakes just as much as you need the front, they strip you of some confidence with their feel. One of the major sore points about these bikes is that they still lack ABS but I’ve been told they’ll have it in India next year.