The Vento DSG has a big trick up its sleeve, it has the better diesel engine and gearbox

The C-segment is a complex one but it’s the only segment where one has such a variety of options. In spite of heavy competition, the best all-rounder is the fourth generation Honda City which is such a hot-seller in the Indian market. The City’s success has also to do with the competition not being so well accomplished, every other car in the segment has a drawback or two. For instance, the Ford Fiesta is much better than the Japanese vehicle when it comes to engine, ride, handling, braking, stability, NVH, build quality, styling but it misses out big time because it lacks rear seat space and there is no option of a petrol engine. The Vento is quite similar to the Fiesta but couldn’t match the City due to various reasons. With the facelifted model, Volkswagen has a big USP up its sleeve, a diesel automatic. Does the Vento diesel with an autobox offer a better deal than the top variants of the diesel City? We set about to find out.

Motor Quest: Volkswagen launched the Vento in India in 2011 while the all new Honda City made its debut in 2014. The Vento was given a facelift in the second half of this year and the inclusion of a DSG gearbox for the diesel has vastly boosted its appeal. 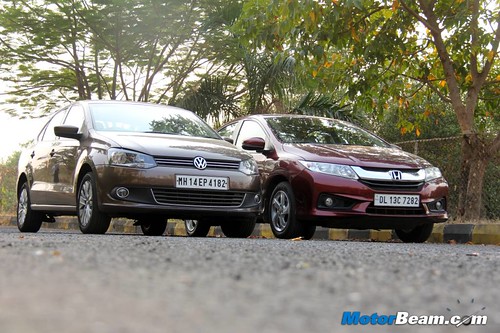 Styling – The new Honda City looks very similar to the model it replaces but the company will tell you that the design is new and that’s true to an extent as the vehicle features new body panels and some different styling elements. In spite of that, the City isn’t a car which will make you stop and take notice and that’s for several reasons. The design of the car isn’t striking enough and there are just too many on the roads (after all Honda has been selling Citys like hot cakes, literally). In comparison, the Vento which is the older car here looks definitely more appealing and the recent update to its styling has gone well to induce freshness in the German sedan. In this Toffee Brown shade, it passes off as a Jetta to many and that’s a huge compliment in itself.

Interiors – Once you step inside, you will notice that both cars are as different as chalk and cheese. The City has an all black dashboard while the VW makes do with a dual-tone one which gives it the airy feel. The City has a more attractive dashboard but it’s a bit high set, the Vento in comparison also looks good, specially with that 3-spoke flat bottom steering wheel with piano black inserts (the City has the same finishing on the centre console). The Vento’s dash is classic VW and the charm of the same doesn’t fade over time. The Vento comes loaded but can’t match the City in terms of equipment as the Honda also has a reverse parking camera (the Vento has rear parking sensors which the City misses out on), leather seats, first in segment sunroof, keyless GO, push button start and cruise control.

The City has more space on the inside and also more boot space, it’s more comfortable for 5 passengers

Seats on both cars are good but space inside the City is much more which means rear seat passengers will be more comfortable in the Honda than the Vento, although the latter too provides generous rear seat legroom. Thus if you want to be chauffeur driven, the Honda will be more comfortable any day, it also has a flat floor while the Vento has a hump in the centre, making it a strict four seater. Even the boot in the City is bigger so the practicality of the Honda cabin is higher. Where the City can’t match the Vento is build quality, the Volkswagen being much better put-together and has no rattles at all, the City does which is disappointing considering the car is priced at a premium. You definitely feel the solidity of the VW cabin but with the City having more equipment and space, it offers a better experience in the interior department. 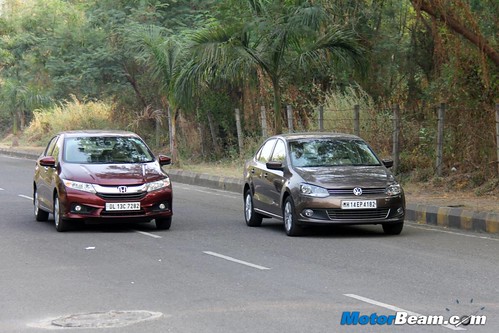 Both cars employ 1.5-litre oil burners but the Vento has more output on offer

Performance – Both cars are powered by 1.5-litre diesel engines but that’s where the similarity ends. While the i-DTEC mill generates 100 PS of power at 3600 RPM and 200 Nm of torque at 1750 RPM, the TDI mill is more powerful with 105 PS at 4400 RPM and 250 Nm between 1500-2500 RPM. The City is the lighter car here by around 60 kgs but the extra output of the Vento is more than enough to make it the faster car of the two. As the table below shows, the Vento is quicker to the 0-100 km/hr sprint by more than half a second. However, the City is faster in between and that’s because of the gearbox, the DSG box won’t let you rev and launch which prevents a good run with the VBOX (you can’t launch the Vento AT at peak torque which robs away crucial time). Also the Vento does an extra gearshift to 100 km/hr, getting there in fourth gear against the City’s third. The whole scenario would be in Vento’s favour if we consider the 5-speed gearbox equipped model but we are talking DSG here for a reason.

Volkswagen’s TDI diesel engine is easily better than the City’s i-DTEC mill, not only in performance but also NVH

Numbers aside, the Volkswagen Vento has the better diesel engine and there is no two ways about it. The City’s diesel mill has less low-end lag but other than that, the Vento is the more lively, it has a punchy mid-range, better top-end and can run to a 5000 RPM redline while the City’s oil burner kicks in its limiter at 4000 RPM. The wide powerband of the Vento makes driving a breeze on the highway as you don’t need frequent gearshifts. Where the Vento’s engine further pleases is the NVH levels, it’s refined and silent for the most part with some noise creeping through in the top-end. The City on the other hand lacks refinement, the motor is very loud and there is a lot of diesel clatter even on part throttle. 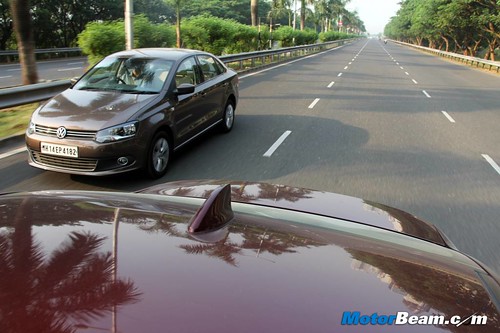 The Vento’s engine has better NVH and pulling power, the automatic gearbox is a gem

However we are talking about manual vs automatic here. The City uses a 6-speed gearbox with a well weighed clutch but a not so smooth gearbox. Although it has short throws, the lever doesn’t slot in smoothly into every gate. The Vento DSG has a state-of-the-art dual-clutch automatic gearbox which makes a breeze of driving. You can still shift gears manually using the tiptronic mode and there is a Sports mode too. The Vento’s autobox is a gem and shifts gears with precision, it’s quick with cog swapping but not the most urgent when it comes to downshifts. Still the 7-speed gearbox is easily the best in class and the default choice for a diesel automatic in this segment. The City is the more frugal car of the two and will easily return at least a km more per litre. 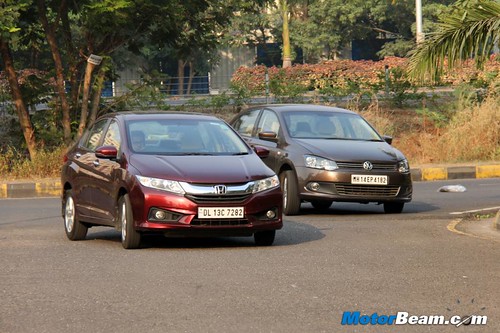 Driving Dynamics – Both the Honda City and Volkswagen Vento are able handlers but with puny tyres on the Japanese, it simply runs out of grip way before the chassis gives up. The petrol City is better to drive as it doesn’t understeer so quickly and the diesel model is quite fun too but still the Vento betters it with a better chassis balance. The Vento has more grip on offer and is simply more engaging to drive. Both cars come with an electric steering which weigh up well at speed but are way short of feedback compared to the Ford Fiesta and Fiat Linea. The Vento is way more stable at high speeds than the City as heavy crosswinds drastically affect the Honda. 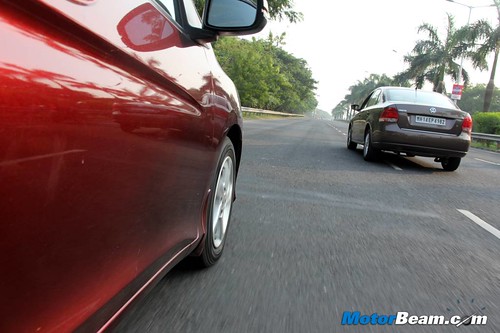 The City’s ride quality can’t match the Vento’s, the latter has a better suspension

Both cars ride well but again it’s the Vento which has the better ride quality of the two. With better insulation, the Vento’s suspension doesn’t get noisy over bad roads, a trait which the City clearly shows. With better build quality and lower NVH, the Vento feels more calm over long journeys, you simply feel more relaxed in the VW, irrespective of you being the driver or passenger. The Vento DSG also gets ESP and hill-hold assist, two features which come in good use. Both cars brake well but again it’s the Vento whose more grippier tyres ensure a more confident stop. The puny 175 mm rubber on the City is just inadequate and when all other cars in the segment offer wider rubber, Honda should too. The City also has poor ground clearance and you are more likely to scrape the underbelly of the Honda than the VW. 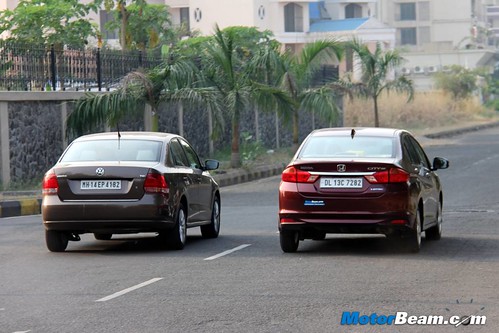 Safety and After Sales Service – Both cars are equally safe as both come with front airbags and ABS as standard. The Vento diesel automatic also gets ESP which is a useful safety system. The Vento’s hatchback cousin got a 4-star rating from Global NCAP while the City got the same rating from ASEAN NCAP. The Vento does have a more robust body and feels better put-together. Where the Vento loses out is service quality, VW’s service stations are known to lack quality and Honda fares way better in this regard. Compared to the Vento, cost of service is cheaper for the City. 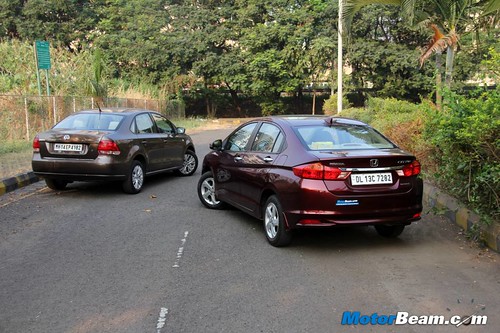 Verdict – First and foremost, many of you would be thinking as to why would we compare an automatic gearbox equipped vehicle with a manual model? The Highline variant of the DSG automatic gearbox equipped diesel Volkswagen Vento is priced at Rs. 8000/- less than the top-end diesel Honda City VX. You get more equipment in the City but for a similar price you get the convenience of an automatic in the Vento. Since day one of driving the latest iteration of the Honda sedan, we have maintained that if you want to buy the City, the petrol model is the one to get. Both cars are very good and excel at different fronts but with traffic soaring and roads getting worse, it’s for you to decide what matters to you? Would you prefer a sunroof or a 7-speed automatic on your diesel C-segment car? We choose the latter which makes the Vento the winner of this shootout.

The facelift to the Volkswagen Vento along with the addition of a diesel automatic has vastly upped the appeal of this German sedan. With both cars priced similarly, it’s the Vento DSG we would pick over the diesel City for the gearbox alone.