If we look at history, it has been Yamaha which has given us performance bikes ahead of the competition. Be it the RD 350 or the R15 and lately the R3, Yamaha has stamped its authority in almost every segment as far as performance goes. But there was one area where they were lacking, the 200-250cc segment where they have finally entered with the FZ25. An India specific model which doesn’t wow you on paper, but in the real world, things turn out to be quite different. 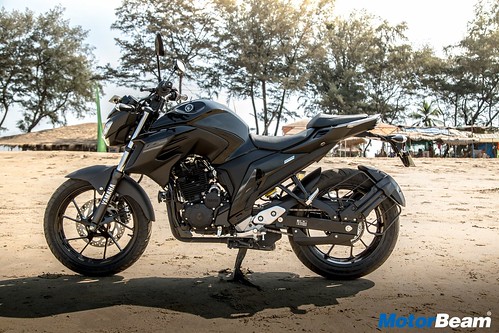 The Yamaha FZ25 has the proportionate street fighter design

Styling – The Yamaha FZ25 for a normal Indian is a FZ look-a-like but it takes most of its design cues from the elder FZ, the FZ09. The headlamp design, the tank cowl and the rear tail-lamp, everything comes mostly from the FZ09. However one might even grab some resemblance of the rear LED tail-lamp to the one on the Apache 200. The front tri-LED unit is very small compared to the overall size of the bike but works just fine giving decent illumination on the road. The overall looks speak out bold and tough and to add to it is the fat MRF rubber on the 10-spoke alloy wheels to do the job. The short exhaust design is taken exactly from the younger FZ siblings. 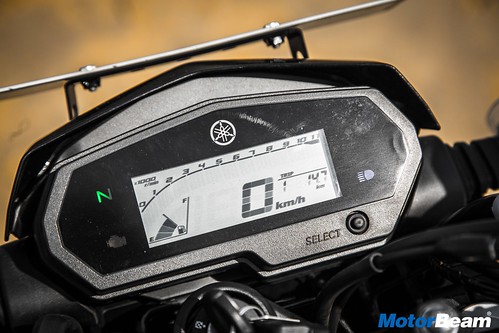 Instrument Cluster and Switchgear – The switchgear on the FZ25 is different from the current FZ siblings. The right switchgear includes a single engine kill switch, all thanks to AHO, while the one on the left is a normal unit. The quality of switchgear is pretty good considering there are changes done for cost saving. The console is also an all new digital unit which is also pretty small considering the overall dimensions. Although the console is new, it misses out on a gear position indicator. However, it displays fuel efficiency which is new with the two trip meters, odometer and clock over the toggle of a switch which is inconvenient as you can’t see trip and time together. 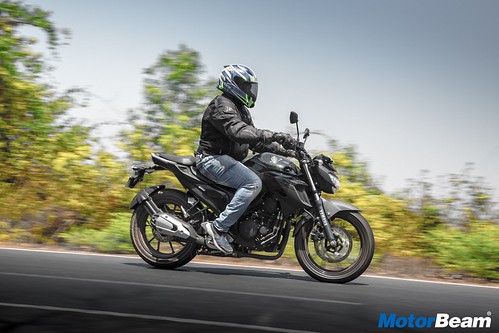 Neither upright nor too leaned in, the posture is just perfect

Ergonomics – Yet the ergonomics stay typical to the FZ series, the wide rider and pillion seat make it interesting. Finally, a pillion won’t complain when sitting on the FZ25. Although the seat is wide the cushioning is a little hard, one might only complain after hours of continuous riding. The riding posture isn’t completely upright and requires very less effort getting on or off the bike even for a short rider. To keep the macho manly look alive and give it good fuel capacity at 14-liters, the tank is pretty wide for its size and this might bug the rider sometimes. The position of the handlebar too is pretty decent, neither too close not too far from the rider.