The Yamaha R15 truly outshines its rivals with its supreme cornering ability.

When Yamaha launched the R15 way back in 2008, it set new benchmarks in dynamics and race track performance. Later, when Yamaha revised the R15 into a mini R6, it just captivated the minds of every kind of rider. Whether it was the design or the performance, the motorcycle was an instant hit among buyers and started selling in good numbers. We at MotorBeam have reviewed the R15 extensively. Whether it was the stand-alone review, comparison tests or comparison with all the performance bikes in our ultimate performance bike shootout, the Yamaha R15 scored high when it came to dynamics. We decided to test the bike for a little longer than usual and answer the questions that lingered on many minds. As per our readers’ request, we tried our best to clock maximum kilometres in a limited time to give you a definite review. 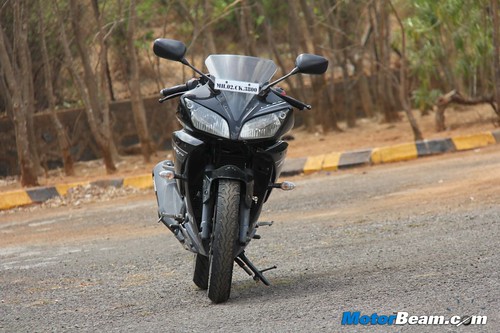 Mini R6! That is what any known bike lover will say at the first glance. It has been more than a year since the R15 V2.0 was launched and it still gets long stares at a set of lights. Moreover, if you are wearing your entire gear, you will be grabbing so much attention that you will want to flee away instantly. The most prominent surgery required for the R15 V1 was at the rear because it looked like a commuter at the rear and sports bike at the front. However, the R15 V2.0 got new LED tail lights, fatter rubber, long license plate holder and the long beefy aluminium swing arm, all of which stand true to the super sport name and design. Removing the rear mudguard will add more flare to the motorcycle. The vents in the front fairing, 10-spoke alloys wheels, carbon fibre cues on the exhaust and the strip that connects the front to the rear sub-frame are the new changes. It is a complete stunner. The opposite sex seems extremely attracted to the motorcycle. Disregarding the cubic capacity, they want a short spin to experience the “sports bike feel”. 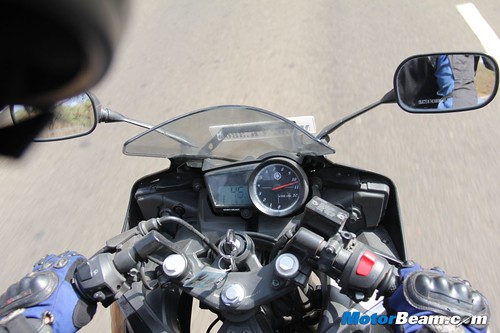 The switchgear is of high quality. The speedometer looks racy and the white backlit is the best choice in our opinion. The bike comes with a temperature gauge rather than a temperature bar. Though both are equally good, we prefer the bar readings. Once the reserve bar starts blinking, a new F tripmeter shows you how many kms you are doing on reserve fuel, helping you to judge how many kms you can go on reserve (advisable to fill immediately after hitting reserve). There are two trip meters and an OBD port indicator. Surprisingly a clock has been omitted. 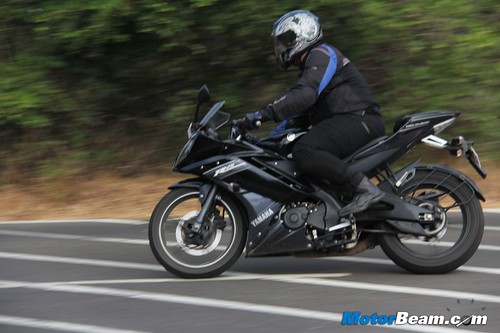 The seats for the rider and the pillion on the R15 are not comfortable. All they need is a bit more cushioning. The ride quality is good. You do feel every bump, but it is not harsh and low speed ride is compliant enough. The R15 is easy to manoeuvre in the city. The riding position is reasonably more comfortable than the older version. There is a bit of heaviness in the steering as well. Heating was never an issue in traffic jams and even if the fan comes on, it runs in silent mode. The riding position is a bit painful for the first 2-3 days, no back pain but wrist does take the hit. For the first few days, new riders may feel the right handle bar is bent or damaged. No it’s not, it depends from rider to rider and after some days on the motorcycle, one gets easily adapted to the position. After you get used to the bike, long trips are not a problem. We took the motorcycle for a 500 kms weekend ride (Mumbai-Lavasa) and the only fly in the ointment was the seats lacking cushioning. 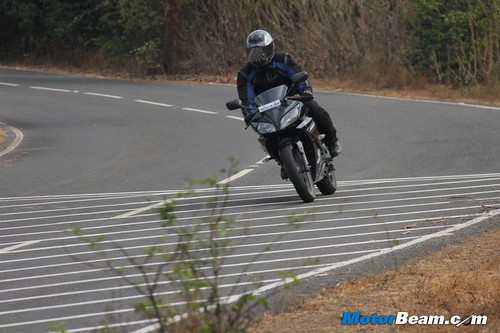 The Yamaha R15 is powered by a 149.8cc, liquid-cooled, SOHC, 4-valve engine which produces a maximum power of 17 PS at 8500 RPM and peak torque of 15 Nm at 7500 RPM. The engine is now more responsive in the lower end of the rev range. The old R15 was criticized for its poor low down torque, drivability in the city, but the revised fuelling, gearing and dual throttle cables makes the job easier on the new bike and there is sufficient grunt in lower gears to overtake in city traffic. The engine is very aggressive in nature. Whether it is sound or the pull, it is very engaging and satisfying when redlining or riding enthusiastically. 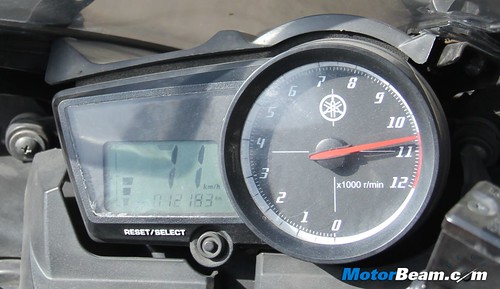 Yamaha claims that the R15 V 2.0 reaches 0-60 km/hr in lesser time when compared to its older sibling and also has a top speed which is 4 km/hr higher than that of the previous version. However, top end is not as ferocious as it used to be on the version one. The claimed top speed is achieved though. NVH levels are good but there are vibrations at 9000 RPM. Red line cut out is not smooth and it is slightly jerky, but if you ask us, we would say it suits the aggressive nature of the engine. The gearing is spot on, with first three gears being relatively short, aiding in good acceleration times. The gearbox is the best in its class and even after all day of abuse, it soldiers on effortlessly. Clutch is light and progressive and clutch-less up shifts and downshifts are not a problem too. 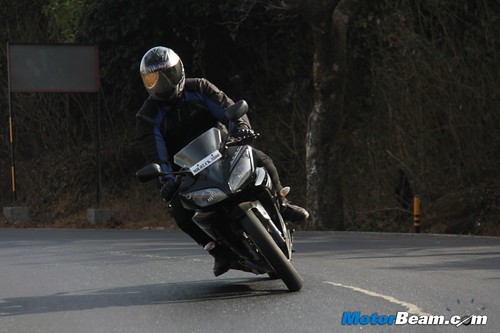 Dynamics of the Yamaha R15 are mind bogglingly good. The motorcycle responds extremely fast to steering inputs, thanks to the clever rake and trail setup. The bike turns in crisply and fast. Lean ratios are extremely low and getting your knee down is easy, thanks to the perfect foot peg positioning. The R15 is very rich when it comes to feedback. The motorcycle gives feedback to every rider input. Whether it is the front-end feel, the rear tyre feedback or the highly talkative brakes, it just talks to the rider and the rider needs to listen and improve his skills. The longer wheelbase of 1345 mm, mature suspension setup and the extremely capable chassis makes turning the R15 into corners a delight. It offer much more confidence than before and it tauter too. Even a newbie can corner the R15 at redline, such is the capability of the chassis. 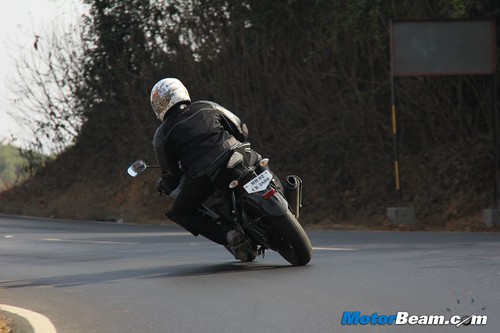 However, it is not as light and agile as the previous version. The tyres played an important role. Our test bike was equipped with soft compound MRF REVZ rubber at the rear that aided a lot of confidence during cornering and braking despite the fact that the tyres were prematurely worn out. The brakes are spectacularly good with good feel from the levers. The strong front brakes shed huge amount of speeds insanely quick and the new bigger 220 mm rotor at the rear is so well calibrated that it does most of the job at low and medium speeds. 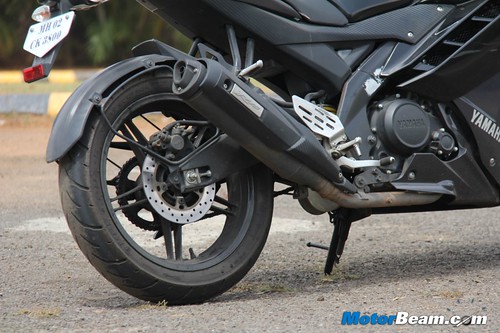 Rear suspension is not an adjustable unit. Chain lubing was not required for our entire test period and no chain noise was heard whatsoever. Twin headlights do a good job, illumination and spread in the dark is satisfactory. Rear view mirrors are wide enough and do an excellent job to show what is behind. Paint job, fit-finish and build quality is of the highest order. Ground clearance is sufficient and the motorcycle did not scrape over big speed breakers despite a pillion on board. Distance to empty is an excellent feature, shows exactly how many kms you can do once the reserve bar starts blinking. Dragging the bike up to the very last sip of fuel is not recommended. We would not suggest owners bringing fuel to such a low level in a fuel injected bike as it does cause premature damage to the fuel pump. 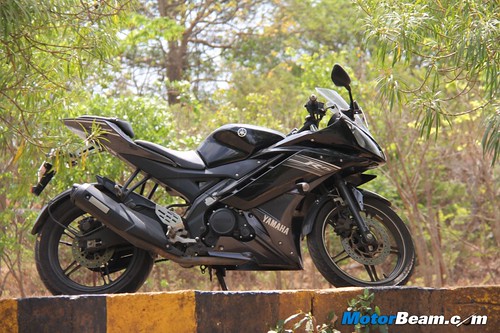 The speedometer unit is inclined downwards, a bit of caution while checking the speedo while riding. The vents in the fairing are not there to store the cleaning cloth. Keep it clear of any objects. Under seat storage is as good as zero. We experienced a strange scenario with the fuel setting on this bike. If the bike is idling for more than a minute and then shifted to first gear, the bike stalls. We hope this is a problem with this particular bike only. To close the fuel filler cap without hammering it, the key should stay in the lock for the twist and shut, so it closes smoothly. 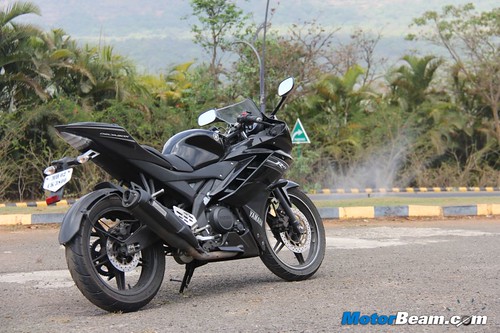 The Yamaha YZF-R15 is undoubtedly a bike meant for keen riders out there. When one factors the dynamics it has to offer, the R15 does look low on horsepower. The insane level of feedback from every input never makes you feel lonely on long rides. Yes, the R15 may be not be practical for the masses but it’s the bike for the chosen ones who just love to ride, whether it’s to grab attention or explore the fantastic engine and dynamics on a twisty road. The R15 pulls your strings the moment you set your eyes on it and when you ride the machine, it puts a wide grin on your face. With good quality all around and Yamaha’s proven reliability, the R15 is never going to let you down.