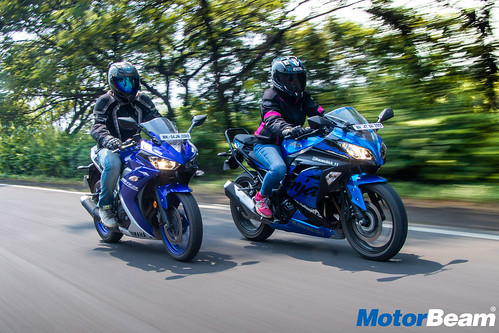 Performance – On paper, the Yamaha R3 is more powerful and same is the case on the road as well. While both the motorcycles hit the ton in under 6 seconds, the R3 does it slightly faster. The Ninja 300, however being 1.8 BHP and 2.6 Nm less, has a higher redline than the Yamaha R3. Both the twin-cylinder motors rev freely and are very refined. The Yamaha has a punchy low-end and a strong mid-range while the Kawasaki’s motor wakes up only in the top-end. Both these engines are liquid-cooled while the heat dissipation on the Ninja is slightly better than that on the R3. While gearing is adequately tall, there is not much to differentiate and both the bikes return the same fuel efficiency of 20-24 km/l. 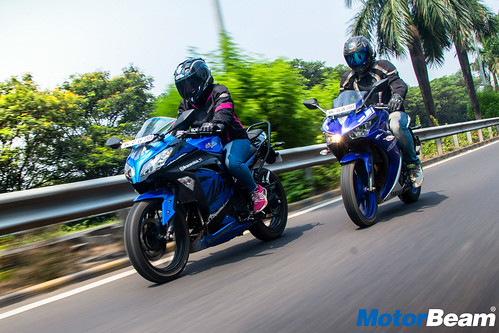 Kawasaki’s engine has better top-end power than the Yamaha

Both bikes have a parallel-twin rumble, yet the R3 is louder than the Ninja 300

The Ninja 300 has an advantage with a slipper clutch while both the bikes come with a 6-speed gearbox. The Yamaha has very crisp gearshifts but the clutch feels heavy than that on the Ninja 300. NVH levels are very well contained in both these motorcycles. However, the Ninja feels smoother and calm while the R3 has some vibrations kicking in at the low-end. The R3’s engine is more suited for daily riding while the Ninja’s motor is made for the track as all the power comes in the top-end. Both the motorcycles sound really good, the twin rumble is soothing while the R3 has a louder exhaust note than the Ninja 300. 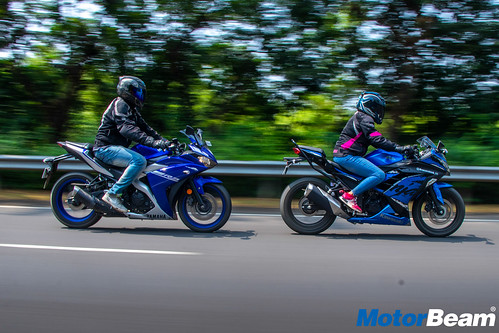 Riding Dynamics – We can say that both the R3 and the Ninja 300 are clones of each other. As both come with a diamond frame, cheap box section swingarm, similar ergonomics and a very similar riding posture. However, it is the suspension setup that changes a few things around. Like the Ninja 300 has a slightly stiffer suspension setup and this aids for better handling. It also provides better feedback while cornering or riding through traffic. The Yamaha R3 has a softer suspension setup which is more suited for touring capabilities. While this setup is more complaint to Indian roads as well. The footpegs are slightly higher on the Ninja 300 giving it better cornering clearance. 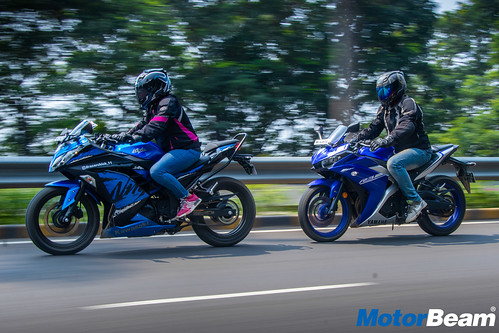 The Ninja 300 is more suited for corners and canyons

Both the motorcycles got better tyres after the update, however, the ones on the R3 are way better than that on the Ninja 300. The Metzeler rubber is stickier and more confidence inspiring than the MRF. Although, it is the same case for the brakes as well. The feedback from the petal discs on the Ninja isn’t as great as the ones on the R3. With the updated brakes and ABS though, the Ninja now has enough stopping. However, as an overall package, the brakes on the R3 are just better. The Yamaha manages to be more comfortable while that Ninja feels more manoeuvrable. 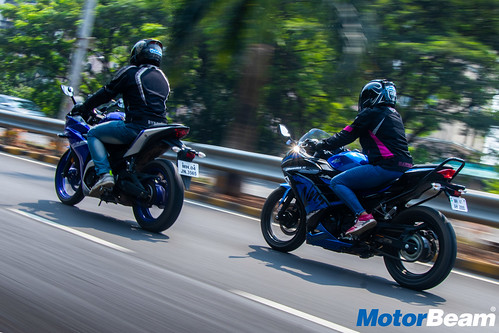 Verdict – One of the few reasons to buy either of these motorcycles is the parallel-twin engine which offers great performance. Appealing to the current generation, both the Japanese twin-cylinders are now hardware rich. Both of them have dual-channel ABS while the Ninja 300 has a slipper clutch and the R3 offers better tyres and brakes. The Ninja 300 is also Rs. 50,000/- cheaper than the Yamaha R3 due to localisation. But the outright performance keeps the R3 appealing for its price. Picking one of these Japanese rivals is solely based on the rider’s preference of the brand. While the Ninja 300 has started to show its age, the R3’s update has already been announced. Getting one of these bikes is purely for the adrenaline rush they offer while being calm and composed. 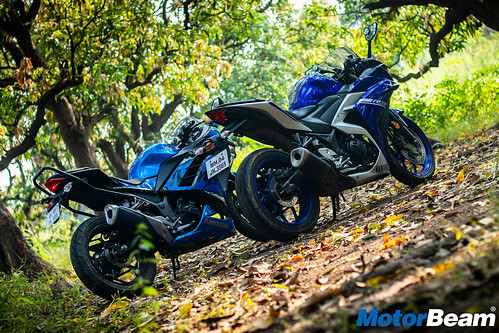 Even with slight differences, both these motorcycles are super fun to ride

“The Ninja 300 has become more appealing now but Kawasaki should have localised the Ninja 400 instead and offered it at the Yamaha R3’s price. The green machine has started to show its age and with more options coming at this price point, the only reason to opt for the Kwacker would be its high-revving twin-cylinder engine. The R3 just feels better but is costlier, however, if you are looking for a reliable twin-cylinder motorcycle with good service and parts support, the premium for the YZF machine is well worth it.” – Faisal Khan, Editor, MotorBeam.

Royal Enfield is on a product offensive for next 3-4 years. New Royal Enfield model to launch every quarter. Yes you heard that right. The   END_OF_DOCUMENT_TOKEN_TO_BE_REPLACED