This is the very first review of the 2013 BMW 7-Series (right-hand drive model) in India.

Although aimed at chauffer driven individuals, the BMW 7-Series pleasantly surprises with its driving dynamics.

Luxury car owners seldom compromise and the new BMW 7-Series is testimony to the fact that they really don’t need to. First launched in 1977, the 7-Series nameplate has been around since a long time, with five generations of this beast running around the globe, pleasing the driver and pampering the occupants. The German automaker has now updated the BMW 7-Series with a minor facelift (Life Cycle Impulse in BMW speak), but the changes are more than skin deep. Set to be launched on the 25th of April, the new 7-Series will be locally assembled in India by the end of this year. We take the 2013 BMW 7-Series (F02) out on Mumbai roads to gauge what’s new.

The BMW 7-Series looks like a grown up 5-Series, when in essence it’s the other way around (the 5-Series has taken design influence from the 7-Series). The 7-Series’ large dimensions are an instant give away of what lies within. The exterior styling is very understated yet elegantly attractive. While the design is not all out catchy, it’s something what most owners will take to immediately, considering the demographic of buyers. The facelifted 7-Series gets a host of changes on the outside. The front bumper gets minor revisions and sports chrome inserts on it while the kidney grille gets 9 chrome slats instead of 12. 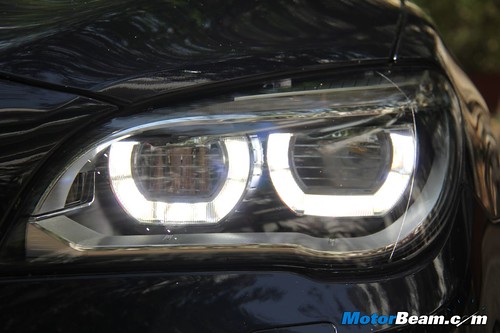 The headlights get new LEDs, which are very striking and feature a U sort of shape, instead of round units found on the old model. BMW is also offering full LED headlights with adaptive technology as an option. The vehicle now sits 8 mm lower which gives it an imposing stance. The rear view mirrors get new turn indicators and the reflectors on each end are joined by a chrome strip, neat. Overall the changes to the exteriors are not immediately apparent and one needs to look closely to understand what’s really new. 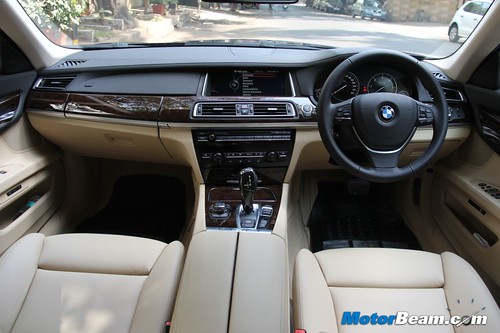 The cabin of the 7-Series is huge and everything inside spells LUXURY. The dashboard is neatly laid out and the packaging is very well executed (like the CD player is placed right above the glove box but isn’t seen till you press a button). The front seats have been re-designed and the iDrive system has been updated (with a new 10.25-inch LCD display along with 3D navigation maps). The 7-Series has fantastic build quality all around and everything feels very solidly put together, with severe attention to detail. The doors have beautifully crafted handles, a design touch we truly admire. 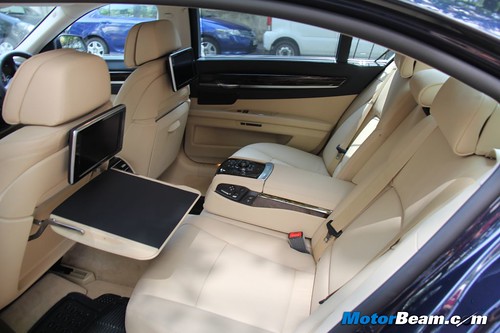 The LWB version of the 7-Series has a 140 mm increase in wheelbase over the standard model, all of which goes in increasing rear legroom space. The rear seat is pure indulgence. An optional rear seat entertainment package is offered, where two individual seats are placed on the rear. From the rear seat itself, the occupants can control almost everything. On the door you have memory seat functions, sun shade controls and massage options. On the arm rest you have buttons to control the iDrive (each rear seat passenger gets their own screen) and individual rear seats (which are all way adjustable). There is even a refrigerator right behind the arm rest!

The rear seat is extremely comfortable and pampers you with supreme support all around. There is acres of legroom, headroom and shoulder room at the rear, more than you would ever need. There is even a foldable tray which can be used as a work bench at the back seat, when you make those million dollar deals on the move. BMW has also improved NVH levels on the facelifted 7-Series with the use of additional sound deadening materials. The boot is reasonably big and can swallow quite a lot of luggage. It can be closed with a touch of a button. 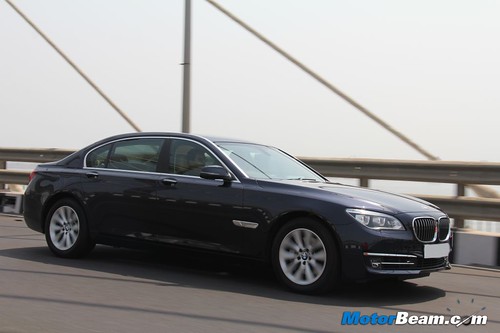 The huge dimensions of the BMW 7-Series (has a length of more than 5-metres) makes it difficult to drive in congested city conditions, or so anyone would believe. However once behind the wheel, all inhibitions are put to rest with the limo feeling extremely easy to manoeuvre, thanks to the precise engineering and the various cameras which help you to clearly look around. Turn on the Seven and the seat belt tightens as you sink inside the opulent leather seats. The 7-Series has five driving modes – Eco Pro, Comfort, Comfort+, Sport, Sport+ (the Sport+ is the most extreme and even turns off the traction control, a mode which we preferred not to test on our short excursion with the car). 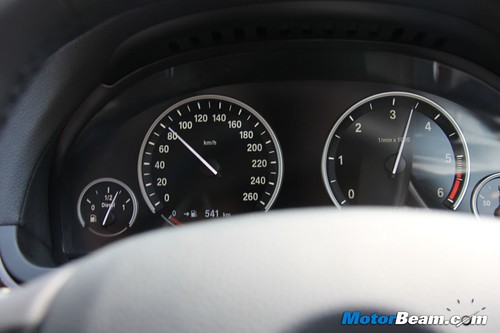 BMW has also updated the instrument cluster, which changes colours according to the mode you are in. It remains the same in Comfort mode but changes to Red in Sport modes and Blue in Eco mode. This feature hasn’t made it to the 730Ld though, which continues to use the same console as before. The focus is on comfort and the 7-Series comes out on top in this department. Other than the well insulated interiors and large on space cabin, the new 7-Series also gets the next generation of Run Flat tyres which offer very good ride quality. The way this Bimmer glides over roads is truly astonishing, with no hint of road undulations being transfered to the passengers. 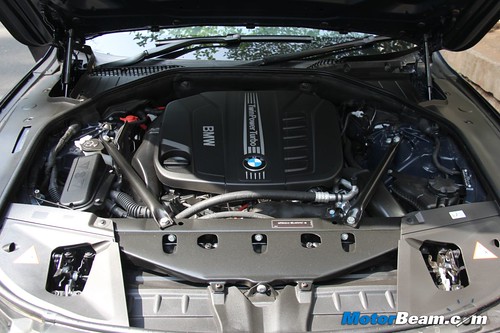 BMW will continue to offer the 7-Series with four engine options, 3 petrol (740Li, 750Li, 760Li) and 1 diesel (740Ld). The most popular version will definitely be the 730Ld, which gets revised output thereby producing 258 HP of power and 560 Nm of torque (a 13.5 HP and 20 Nm increase). BMW claims the efficiency of this engine has increased too and we have no reason to doubt with the Start/Stop system working well in keeping fuel consumption low. All models of the 7-Series now get 8-speed automatic transmission (this gearbox was offered only on select engines of the pre-facelifted model, others were offered with a 6-speed). The 8-speed unit works flawlessly and extracts the very best out of the engine. 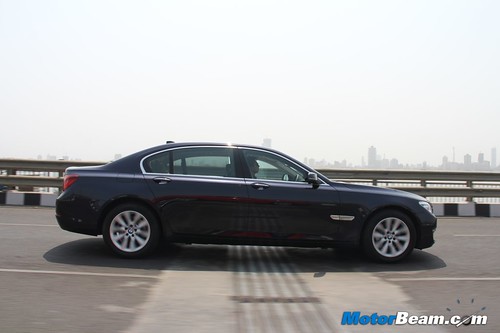 Performance is simply amazing for a car which tips the scale at 2 tonnes. Dab the throttle and the 7-Series quickly gathers momentum without giving any hint of what engine speeds it is doing. Power delivery is linear and lag is well contained with the motor enthusiastically pulling to its redline and gathering pace with severe gusto. Shift into Sport mode and the 7-Series will hold gears til the rev limit (no paddle shifts offered). Handling is simply outstanding and seldom do you feel you are piloting such a big vehicle. In Sport mode, the steering becomes heavier and you can really push the car around corners without thinking twice, such is the level of feedback from the well connected steering. High speed stability and braking performance continue to be up to BMW standards, which is excellence at its best. 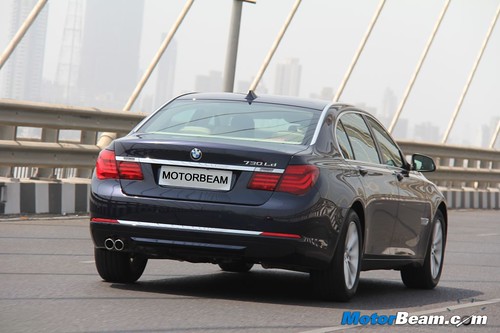 BMW has made its flagship vehicle even better. While the changes are not a world apart, the 2013 BMW 7-Series is so much a better package than before. It is par excellence in terms of interior space and comfort while at the same time, the 7-Series doesn’t sway away from BMW’s principle. Driving the 7-Series does feel different from driving the 5-Series (which itself is brilliant) and we mean that in a good way. The vehicle feels like a sophisticated automobile, with no compromises made in any way whatsoever. The BMW 7-Series is the perfect balance of comfort, luxury and sheer driving pleasure.

The 7-Series is simply mind blowing when it comes to dynamics, an area which all BMW’s seem to have pioneered very well. Factor in other aspects like the supreme levels of luxury and performance and the 7-Series is again a force to reckon with.