The Volkswagen Touareg is a hugely capable SUV, both on and off-road.

While the word Volkswagen means “people’s car” in German, the company does make a few vehicles which are targetted to a higher segment of buyers (mostly BMW and Mercedes customers). The Touareg is one of them. The name of Volkswagen’s mid-sized SUV comes from the Berber nomadic tribe of North Africa, who are called Tuareg people. Launched in 2002, the second generation of the Volkswagen Touareg hit roads in 2010 and was launched in India last year. This CBU model is built in Bratislava, Slovakia. The Touareg’s Typ P7L1 platform (the latest gen model is internally known as Typ 7P5) was developed by Volkswagen, Audi and Porsche together with the aim of creating an off-road vehicle with sports car like handling. The same platform is shared with the Audi Q7 and Porsche Cayenne but does the Touareg offer the same levels of balance as its siblings?

Exteriors – The styling of the second generation Touareg is unmistakably Volkswagen and evolves from the old model. The headlights are very Passat like and feature 15 LEDs placed in a U, which work as daytime running lights. The front grille has twin chrome slats with the VW logo neatly placed in between. The foglights are placed on the lower part of the bumper, giving good visibility in the night. The side profile of the Volkswagen Touareg reveals the visual bulk to a certain extent. Large 18-inch wheels and good ground clearance immediately gives SUV presence to the vehicle. The side has a large chrome bar running across the lower side of the doors, while the windows are wrapped with chrome lining. The roof rails further add to the contrast. 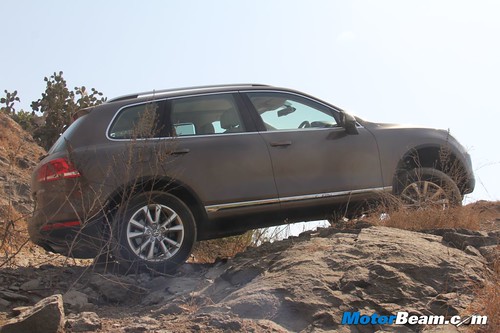 The rear of the Volkswagen Touareg carries the same muscular delight seen on other sides. A roof spoiler has been neatly integrated while the tail lights again spell huge resemblance to the Passat. Unlike the first generation Touareg, the tailgate mounted spare wheel has been done away with. The Volkswagen Touareg now makes do with a space saver and electronic air compressor. The hatch door has a chrome strip on the bottom while reflectors have been placed on the bumper. Twin exhaust pipes are neatly hidden on either sides. The overall stance of the Touareg is very imposing and people do tend to turn around to have a second look at this mean machine. The rare number of units on the road also add to the exclusivity factor. 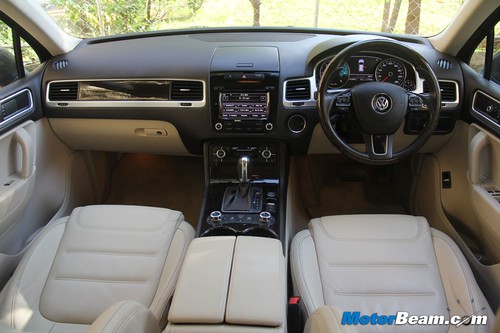 Interiors – The cabin of the Volkswagen Touareg boasts of the same level of quality as other VWs. Although very high in quality, the interiors are not the most exciting with a mix of Audi and Volkswagen parts being used exhaustively. The centre console for example, picks up many buttons from the Audi Q7. Other parts like the steering wheel (slightly larger in the Touareg), instrument cluster and gear knob are very similar to the ones seen on the Passat and Jetta. The two-tone dashboard looks attractive and the silver inserts break the brown monopoly.

The generous height of the Touareg means getting in and out is a breeze, even when the vehicle’s height can be raised for off-road activities. You sit in a commanding position with all seats offering fantabulous levels of support, more than enough to keep you stress free on long journeys. There is ample amount of legroom for all passengers and rear seat occupants will be particularly impressed with the 40 mm longer wheelbase (over its predecessor) which gives them acres of room to stretch. The fifth passenger will have to compromise on legroom due to the transmission hump.

The Touareg has quite a few buttons neatly stacked on the centre console, including height adjuster, electronic handbrake, engine start/stop and on-off road modes. Equipment levels are quite high with powered seats, touch-screen audio system (with Bluetooth and various other connectivity options which are a standard at this price), reverse parking camera, four zone climate control AC, etc. Surprisingly there are no paddle shifters and the steering can only be manually adjusted. There is ample amount of storage spaces inside the cabin.

The Touareg is a 5-seater and the boot is big enough to carry really large suitcases and plenty of them. If you need more space, you can simply tap a button and flip the middle row of seats. To make loading easier, buttons are placed in the boot to lower the rear suspension, a really nice and unique touch. There are two lights in the boot along with a 12V socket. The cabin feels rich throughout and the large panaromic roof further amplifies the airy feeling inside the cabin. 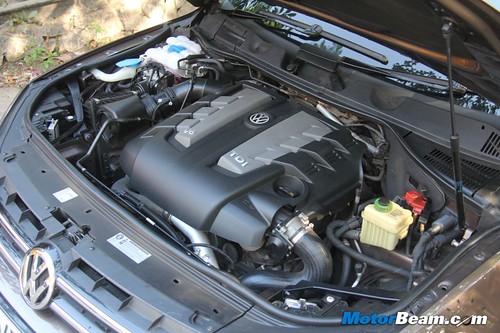 Performance – The Volkswagen Touareg has a range of engines on offer globally, including a Hybrid powerplant in the US. Many would remember the old gen Touareg, powered by the massive V10 TDI motor which pulled a Boeing 747 Jumbo Jet. The same model was also offered with a W12 engine which enabled it to reach 100 km/hr in just 5.9 seconds. In India, we have only one engine on offer and it is the highly acclaimed and proven 3.0-litre TDI diesel mill. This V6 motor produces a modest 240 BHP of power which might not seem sufficient to haul a beast which tips the scales at over 2 tonnes. Get behind the wheel and you are bound to be surprised, pleasantly. 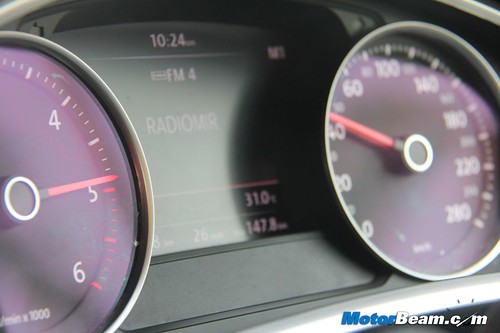 This oilburner produces 550 Nm of twist which is more than enough to lug the Touareg around. You never feel short of performance till you approach higher end of three digit speeds. There is an instant reaction as soon as you tap the pedal and the Touareg accelerates in a linear fashion all the way to its almost 5000 RPM redline. Turbo lag is well contained and this diesel motor is so well engineered it rarely makes any noise. The 8-speed gearbox deserves applaud for being very quick with gearshifts. In manual mode, the Touareg won’t upshift, giving you control of things. The first six gears are relatively short, resulting in excellent performance, while the last two gears are taller, helping in better cruising ability. 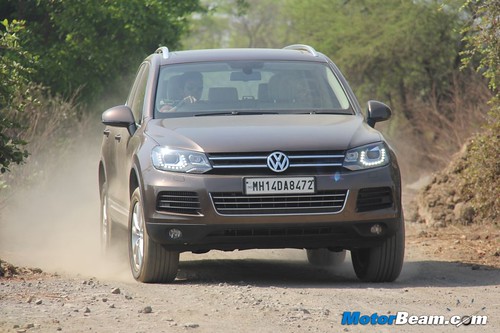 Driving Dynamics – Even though the second generation Touareg has grown in all dimensions, Volkswagen has kept the weight in check and the new model weighs around 200 kgs less than its predecessor. Handling is very good and you can push the vehicle with confidence around corners. As expected, there is a bit of body roll but its very well contained and seldom do you realize you are gunning down corners in an SUV. The steering feels well weighed at speed although it does feel a bit dead at the centre. The suspension has two modes, Comfort and Sport (there is a switch to toggle between them instead of a button!) which adjust the dampers accordingly. In comfort mode, body roll is more pronounced but the Touareg glides over bad roads. The tradeoff is the uneasiness it feels at high speeds. In Sport mode, the vehicle is lowered by 25 mm, resulting in better stability and body control. The air suspension has 5 settings – Loading, Sport Normal, Comfort Normal, Off-Road and Special Off-Road, with the latter most providing a ground clearance of 300 mm. 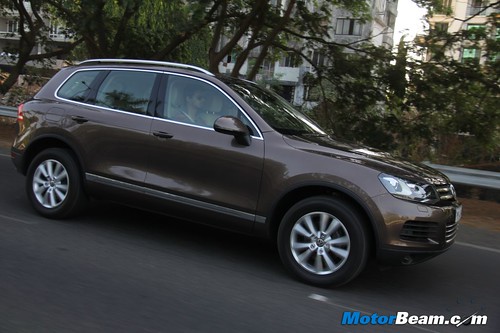 Braking performance is sharp but the pedal feels a bit spongy. The vehicle boasts of 45 degree climb angle, 35 degrees gradient angle and 27 degrees ramp angle, making it at ease under a variety of conditions. The special off-road program activates hill-descent control and tweaks the 4Motion system, which works with precision to make off-road driving a breeze. The Touareg has a water wading capacity of 580 mm, which is far more than what owners will subject the car to. Volkswagen also offers a more off-road capable version abroad, which has a low-range transfer case and lockable differentials. Want more? Volkswagen Sweden recently built a snow treading Touareg. 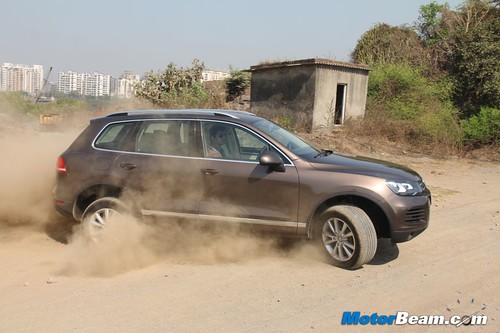 Verdict – The Volkswagen Touareg does have a lot to offer buyers. It looks brutal, drives very well and is extremely comfortable too. Then there is the off-road performance and decent level of kit which further makes the Touareg’s case stronger. There is little to fault with Volkswagen’s premium SUV but if we really had to point something, it would be the price. At Rs. 71.86 lakhs, the Touareg is in sniffing distance of its more premium siblings, a fact most buyers will find hard to ignore. That said, you will still get something unique with the Touareg, which has its own set of charms.

The Volkswagen Touareg is thoroughly impressive in almost all aspects. It’s fast, comfortable, off-road ready with impressive all around dynamics. The only chink in its armour is the hefty price tag. 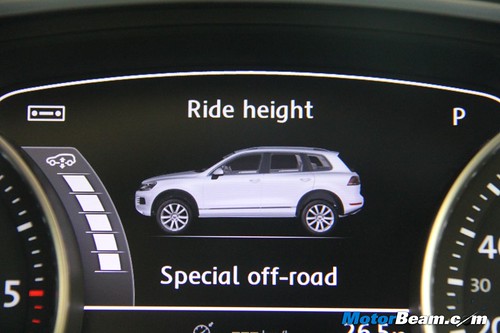 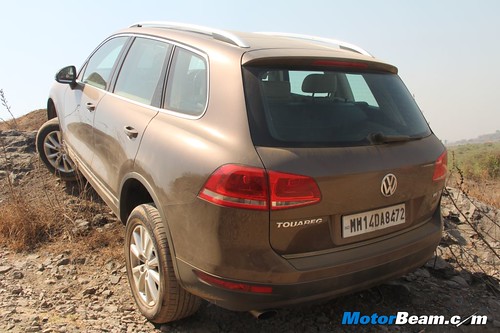