The 7-Series is a driver friendly luxury saloon with immense prestige at the same time.

The BMW 7-Series has seen five generations until now since its birth in 1977. The current fifth generation 7-Series was introduced in 2008, which got a mid-cycle facelift in India last year. The updates on the new BMW 7-Series are not limited to cosmetic changes. The luxury saloon also comes with revised interiors and a longer list of features. Under the hood is a more fuel efficient oil burner and the suspension setup has been updated to improve ride comfort. We came up with the exclusive first drive review of the new BMW 7-Series in India and now we spend a good while with the elegant lady to explore its prowess.

Exteriors – Every new generation of the BMW 7-Series introduces new technology and design language trickling down to other cars in the BMW line-up. When the latest generation 7-Series was introduced in 2008, people were spellbound with the bold new design and its elegant stance that looks quite mature than the outgoing generation. However, the recent updates include minor changes in the styling as seen on the updated 5-Series. The traditional BMW kidney grille now has more presence with a larger chrome surround and nine slat arrangement instead of 12. The fresh new adaptive full-LED headlights now stare at you with new corona rings that look crisp. 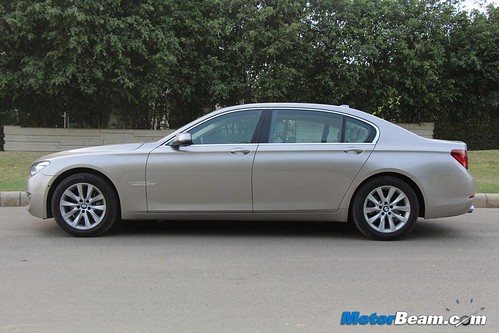 The lower section of the front bumper comes with larger air intakes and chrome touches for the premium feel. In order to make it more fuel efficient, there are air curtains placed alongside the foglamps for aerodynamic flow of air through the front wheels. The side profile remains unchanged apart from the new alloys and repositioned LED blinkers on the ORVMs. At the rear, tail lights remain unchanged but the detailing inside the tail light cluster has become richer with different shades of red. There is a new chrome strip running on the rear bumper, connecting the two reflectors. The BMW 7-Series is huge in size, especially when viewed from the side angle. 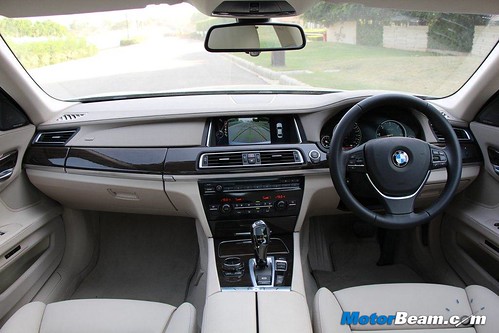 Interiors – Open the wide doors, glide inside and you just need to shut the doors softly, as it clicks in automatically with the suction mechanism, neat feature! Now admire the graceful interiors of the BMW 7-Series, there is so much inside to look at. The smoothly flowing dashboard with luxurious wood finish trim, driver-oriented console, leather seats, exquisite fit and finish and fantastic quality materials. Now once you are done admiring the luxury, you’ll realize that hardly anything has changed compared to the previous model. Now take a look again with keen observation and you will see a digital instrument cluster that changes its theme depending on the driving mode, as we have seen on the BMW 5-Series recently. The steering feels good to hold but sadly no paddle shifts are provided.

The BMW ConnectedDrive has been updated on the new model so you get a better screen to look at and a grown up iDrive system for easier control on the infotainment system. New features of the infotainment system include BMW Apps, BMW Live and BMW Internet Browser. The Harman/Kardon sound system churns out sensational music. The screen is bright and crisp that also doubles up as a monitor for various camera angles. There is a split screen for cameras placed on the front bumper to check traffic coming from both the sides then there is a rear view camera and birds-eye camera view that gives an idea of what’s around the car, good for tight traffic conditions. 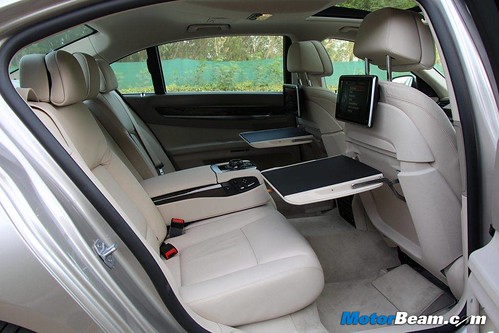 Rear seats are extremely comfortable, retractable tables are a boon for workaholics

The new BMW 7-Series comes with rear seat entertainment package that includes 9.2-inch flatscreen monitors and controls placed on the sizeable rear armrest. The 7-Series is ideal for four people as it gets four individual seats with separate electric adjustability. The front seats have been revised for better support and they are extremely comfortable to sit in while driving. The extendable under-thigh support is a boon and you get full back and shoulder support. The rear seats have a more relaxed stance and are reclinable too. Legroom is such that if the front seats are pushed all the way back, rear passengers still have enough room to stretch their legs. The foot rest at the rear and electrical sunshades on windows and rear windscreen adds to the convenience. You also get a mini fridge behind the rear armrest to keep your drinks cool. However, that fridge takes some boot space and hence there is limited cargo space of 500 litres in the trunk. The 5-Series comes with more boot space of 520 litres and even the Honda City has 510 litres of luggage capacity. 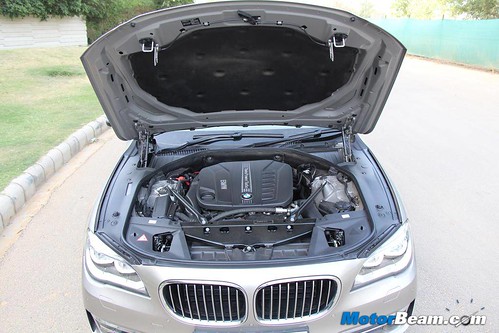 Performance – The BMW 7-Series is offered with three petrol and one diesel engine options in India. The petrol lineup includes 740Li, 750Li and 760Li with in-line six, V8 and V12 engines respectively, all are completely imported via the CBU route. Our test car is locally assembled as it’s the 730Ld which comes armed with the popular 3.0-litre straight six diesel engine. BMW claims that it’s the world’s most powerful straight-six diesel engine! The diesel unit produces 258 BHP of power at 4000 RPM and 560 Nm of torque at a low 1500 RPM. Push the button to start the engine and you won’t feel a thing from the oil burner. Instrument cluster and the screens waking up are the only signs of engine startup. Such is the refinement level, which has been further improved by optimising soundproofing on the new model. 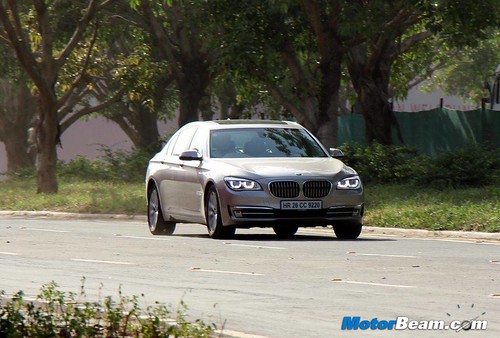 The straight-six diesel is an ocean full of torque and high end power. Half throttle input is enough to haul the two tonne saloon easily with confidence and it goes with linear acceleration. There is a good low end punch of torque available right from 1500 RPM, which continues up to 4000 RPM and further up there is abundant power to hold the top-range. You never feel out of power. Once you mash the throttle, the power delivery is very strong yet soothing and not ferocious like the 530d. 0-100 km/hr comes up in 6.2 seconds. Mated to this engine is a 8-speed automatic gearbox. 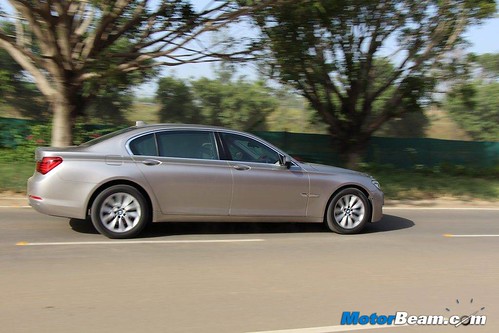 The BMW 730Ld comes with ECO, Comfort and Sport modes and the cog shifting is done according to the mode. ECO and Comfort are smooth and early while the Sport mode holds each gear longer to extract performance. Upshifting is very quick but downshifts along with hair’s breadth of turbolag are relatively slower. Steering mounted paddle shifts are sorely missed, only gear lever can be used for manual shifting. Thanks to BMW EfficientDynamics, we got an impressive fuel efficiency of 9 km/l on our enthusiastic test run. BMW claims 16.26 km/l of combined fuel economy.

Driving Dynamics – Drive any other German car then drive a BMW, you can immediately feel the difference in a positive manner. What’s so different and what exactly is the feel we are talking about? While you are enjoying the acceleration a corner comes and you dart in the Bimmer with full confidence and while cornering hard you can feel the chills running down your spine. That feeling is not present in most of the BMW 7-Series rivals. The extra bulk of the luxury saloon also feels good around corners with its convincing and weighty dynamics. The steering feedback is exactly what you would expect from a BMW, precise and direct. The BMW 7-Series takes the rough and smooth equally well. The updated rear air suspension just glides over the undulations and the Pirelli tyres further cushions the rough edges of the tarmac. High speed stability is commendable and so is the braking performance with ideal pedal bite. 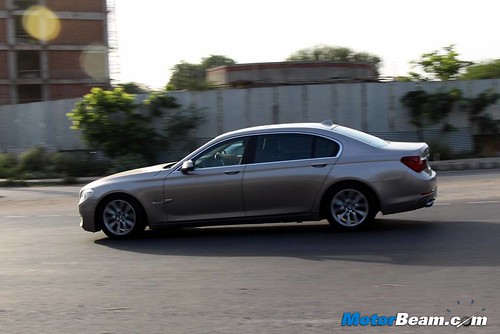 Safety features offered are aplenty and standard across all variants

Safety – Surprisingly Euro NCAP hasn’t crash tested the BMW 7-Series yet but we can assume it to have a strong safety rating by the long list of safety equipment on offer. The BMW 7-Series comes with active front headrests, active protection with Attentiveness Assistant, front airbags, head airbags and side airbags. To keep the car in control and stable, BMW offers ABS, Cornering Brake Control (CBC), Dynamic Stability Control (DSC) and Dynamic Traction Control (DTC). All variants of the BMW 7-Series are equipped with aforementioned safety features as standard.

Verdict – A full size premium luxury sedan is usually all about prestige, luxury, comfort and status symbol in India. In addition to these aspects, BMW manages to offer supreme driving pleasure. You’ll feel happy while being chauffeur driven and you’ll be more than happy when you get behind the wheel. Then there is the sheer size of the BMW 7-Series, flash those LED headlights twice with the manly horn and the road is yours, people make way for it. However, the styling could have been improved considerably with the updated model, it doesn’t stand apart in its segment. It’s like the Apple iPhone, which comes with minimal visual changes in its mid-cycle update but many improvements under the skin, but is still one amazing piece of machinery.

The BMW 7-Series is made for those who want a perfect harmony of luxury and driving pleasure. However, the updates are not drastic in terms of cosmetics and interiors while the features offered are limited compared to rivals.

The well lit interiors of the BMW 7-Series look sensational in the dark, quality is top level and fantastic

The LED treated headlights and tail lights get massive attention to detail, they are very BMW in design