The Nano is a very ambitious project at Tata Motors but in spite of the world’s most affordable car not picking up sales, the company hasn’t given up just yet. Among a sea of new variants of the Nano, we have yet another new one, probably having the highest chances of commercial success. Called the GenX Nano, it gets a host of changes which improves the car significantly. The highlight of this new Tata Nano is the option of an automatic gearbox, making this rear-wheel drive vehicle the cheapest automatic to buy in the country. But are the changes enough? 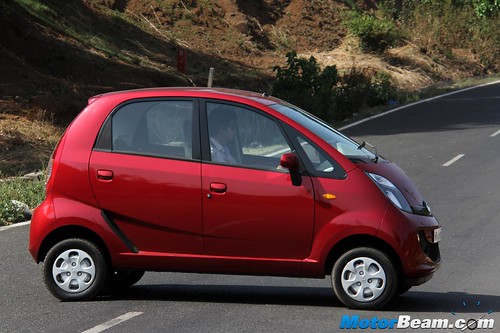 Exteriors – The basic design of the Nano has been retained but the bumpers are all new with what Tata Motors likes to call the “Infinity Motif” grille (the radiator has been shifted to the front), giving the vehicle a youthful appearance. The headlights get the smoke treatment and also get ‘Nano’ engraving on it, the vehicle also gets foglamps. The hood gets a piano black garnish that connects the two headlights but changes on the side are lacking. The rear gets a keyhole and handle because the Nano finally gets an openable boot hatch. In keeping with the positioning of the Nano, Tata Motors has given the car two new colours – red and pink. 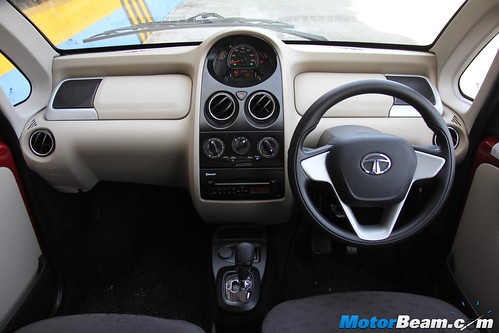 Interiors – The dashboard on the Tata Nano GenX has been carried over but gets minor changes to freshen the cabin. The biggest and most obvious change one will notice is the new Tata steering wheel which was first seen in the Zest and Bolt. The new steering wheel is great to hold and has just the right size. The car gets a blackened centre console (earlier it was silver) while the instrument cluster gets very minor changes like the marking for economy zone. A nice touch is the silver surrounds around the AC vents. Equipment levels are generous for the price, the Nano continues to get a Bluetooth enabled audio system which in Tata speak is “AmphiStream”, the 4-speaker system also gets radio, CD, AUX and USB connectivity. Other features in the range topping trim include keyless entry, central locking, multi-information display and the manual also gets gear shifting indicator. 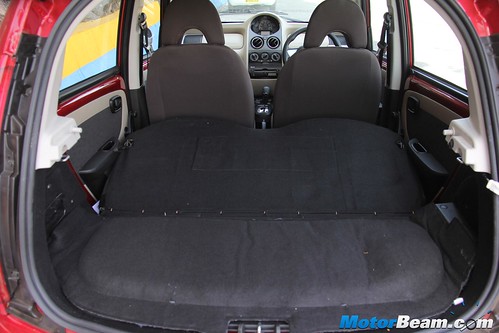 Luggage space has drastically improved on the Tata Nano GenX

Tata Motors has also given the Nano GenX new seat fabric and new door pads which get the “Infinity Motif” too. Slight revisions to the positioning of the gear lever as the power window switches and charging port are ahead of the lever (earlier the power window button was behind). Space inside the cabin is good, headroom is more than abundant but under-thigh support is lacking at the rear. The seats are decently comfortable but are thin and there are no bottle holders. The Nano finally gets an openable boot door which makes it easy to access the trunk but it only opens with the key. Boot capacity is 110-litres on the manual and 94-litres on the AMT variant. One can fold the rear seat to boost luggage space to 500-litres. 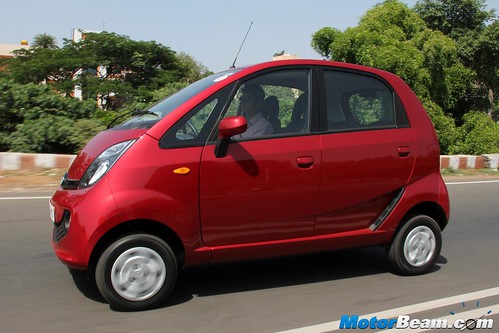 Performance – Tata Motors hasn’t made any changes to the engine and the same 624cc, twin-cylinder motor continues to power the car and takes some cranking to come to life. It continues to pump out 38 PS of power and 51 Nm of torque, matched to a 4-speed manual gearbox or a 5-speed AMT. The company has improved on the NVH (the exhaust gets a new thermal management and the engine gets a cooling fan) and the motor does sound more refined than before but still has the drone inside the cabin and vibrations can be felt on the doors. But how is the AMT to drive? It gets a Neutral, Reverse, Acceleration and Manual slot on the lever and there is a button for Sports mode too. Performance in the city is more than adequate and when driven sedately, the gearshifts are seamless. 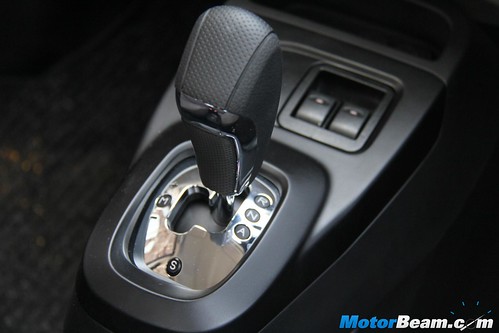 However when take the Nano automatic to the highway, the lack of punch from the engine is evident, highlighted more by the AMT gearbox. On full throttle, the car just won’t make quick progress and there is quite a lag between shifts. In manual mode, things are slightly better but the gearbox upshifts if you forget to do so. Sports mode does help but inclines are an issue for the car and one really needs to step hard on the accelerator. There is a creep function which makes it easy to drive in stop-go traffic as the car continues to crawl ahead without any throttle input. While the 4-speed Nano we drove earlier topped out at 105 km/hr, we were able to take the AMT equipped model to 120 km/hr. The ARAI certified mileage has decreased but the Nano will continue to be among the most frugal petrol cars in the country. Importantly, the tank capacity is now 9-litres bigger at 24-litres. 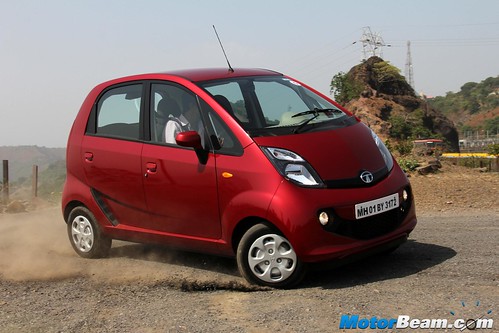 Driving Dynamics – The Tata Nano is an easy car to park in the city, thanks to the light steering wheel which has an active return function. The low turning radius of 4-metres means taking u-turns is a walk in the park. The Nano is now heavier (by 25 kgs on the MT and 30 kgs on the AT) and according to Tata Motors, safer too. The company has given it reinforced front body structure, impact cushioning crumple zones and intrusion beams for added safety. The rear gets an anti-roll bar for improved stability and we found the Nano to be more composed at higher speeds although crosswinds do affect the car significantly. 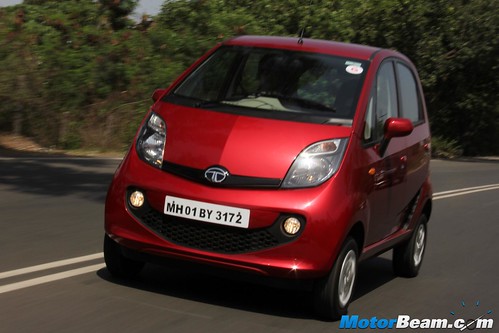 While ride quality is good at city speeds, it is the big bumps that unsettle the Tata Nano substantially. The small wheels are simply not able to cope up with our bad roads. The car has good handling but grip levels are low, the steering lacking feel and feedback at high speeds. Being a rear-engine, rear-wheel drive vehicle, you can drift the Nano with ease but we doubt any of the Nano customers would be interested in doing such a thing. What is disappointing are the all drum brakes, the company still hasn’t given it front discs. Stopping power is inadequate and the pedal lacks bite. 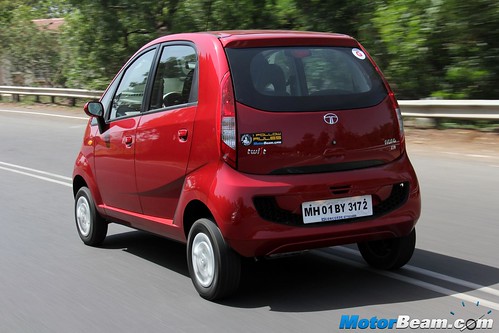 The Nano GenX sees multiple improvements, making it the best Nano yet

Verdict – The GenX Nano is offered in 4 variants – XE, XM, XT and XTA, the first three being manual while the XTA is equipped with the AMT gearbox. Compared to the previous version of the car, the Nano GenX takes a step in the right direction. It is more refined than before, looks fresher and the autobox adds a whole lot of convenience to the package. But Tata Motors continues on the slow path of updating the Nano, choosing to bring out a new model every year rather than a significant update to catch the fancy of first time car buyers. But this time around, the automatic transmission might just give the Nano the sales it has always deserved.

The Tata Nano keeps getting better every year but somehow sales aren’t improving like they should. The GenX Nano is the best Nano yet and the AMT gearbox is its trump card for wooing buyers. 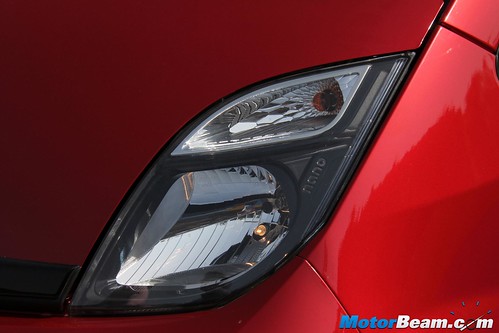 Notice ‘nano’ engraved inside the blackened headlight of the vehicle

* Easy to drive city car, with great manoeuvrability and compact dimensions
* Spacious cabin and well equipped too, has features which are absent on other small cars
* Fuel efficient engine now boasts of better refinement, NVH has improved 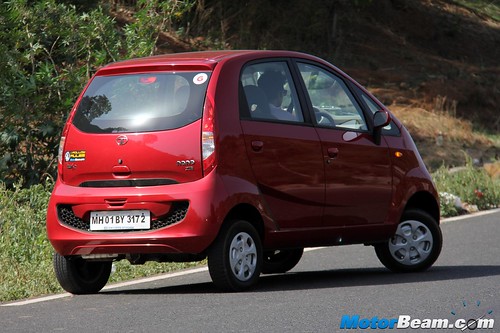 There are good car movies and then there are Bollywood car movies. The ongoing corona virus pandemic has been making most of us stay at home and   END_OF_DOCUMENT_TOKEN_TO_BE_REPLACED

TVS Young Media - Final Race An idea coupled with action will always get better results than expectedThe second race at MMRT was a blast, coming in   END_OF_DOCUMENT_TOKEN_TO_BE_REPLACED

Enthusiasts have a couple of really good choices in the D-segment sedan with the BMW 330i and Skoda Octavia RS. Ever since the price gap   END_OF_DOCUMENT_TOKEN_TO_BE_REPLACED