Price OTR Mumbai: Not For Sale

The T1 Prima Racing Truck has seen much improvements for season 2, it’s a lot of fun

Getting up at 5 AM might not sound like a wise idea to the owls amongst us yet we do it and enjoy it immensely, after all who wouldn’t love to get behind the wheel of a fast car or hop onto a blisteringly quick motorcycle. However if it is a truck you are heading to drive, maybe the excitement won’t be present at all but in our case, it was the racing Tata T1 Prima truck which not only kept us awake all night but also curious like a 8-year old boy. We get behind the wheel of the season 2 race truck and come out thrilled. 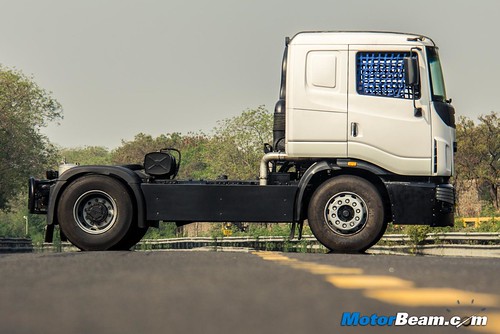 Exteriors – The Tata T1 Prima Race Truck isn’t going to haul all furniture or whole supermarket because there is no trailer attached. The tractor by itself looks purposeful with its stance clearly indicating it means serious business but not of the commercial kind. For 2015, several changes have been made including the shifting of the rear lights a little inside so as to prevent them from breaking in case of a rear-end dash which is so frequent and often labelled as a racing incident, this was an FMSCI suggestion. The truck also gets an additional toe-hook at the front and the rear gets mudguards too. The company has also improved the side covering. 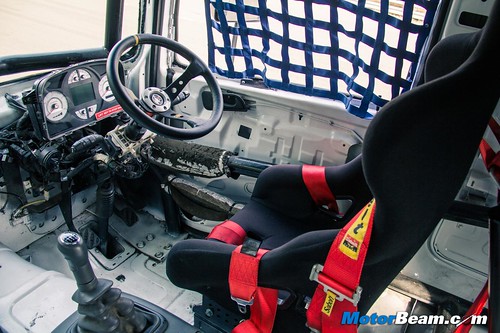 Interiors – Truck racing isn’t very popular in India but Tata Motors is taking the initiative to develop the sport. There are no rules and regulations for truck racing in India so Tata Motors is following the British standards. Thus the T1 Prima racing truck is made with safety in mind, there are no side windows, instead there is a curtain. There is a roll cage and getting to the driver’s seat can be a bit of an effort as one needs to climb over it to get in. The racing seats (with 5-point harness) get a new rigid mounting structure and an inside rearview mirrors has been added. Quite a few of the changes are incorporated based on driver feedback from season 1. The interiors are basic as the dashboard has been stripped out completely with just the instrument cluster retained. 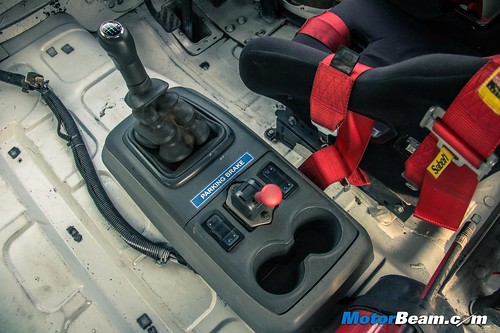 Cupholders in a racing truck which is completely stripped out otherwise!

Being a truck, the cabin is super wide but very empty, lots of wires and parts are exposed. There are still two cupholders, incase you like to rehydrate yourself while racing. The centre console has a small lever operated handbrake and one needs to lift and push forward to disengage (engaging is easy, you simply pull it back). The view from the driver’s seat is excellent and there is a fire extinguisher placed right between the front seats. The instrument cluster has a digital display which showcases speed date and time while the odometer is also digital. There are multiple gauges including an analogue speedometer, tachometer, fuel meter, temperature meter and pressure meters. 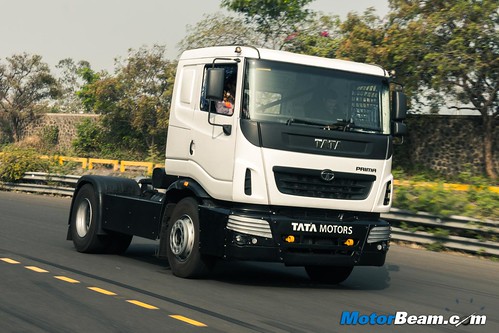 Performance – Powering the Tata T1 Prima Race Truck for Season 2 is the same engine with the same output as Season 1. The 8.9-litre, straight-six cylinder Cummins powerplant has been tuned for racing and produces 370 BHP of peak power at 2100 RPM and 1550 Nm of peak torque at 1300 RPM. Last year’s truck had a claimed top speed of 110 km/hr while this year, the speed has increased to 130 km/hr (we managed to hit 140 km/hr though). The gearbox is an EATON 9-speed unit and sees no changes in ratios from last year. So how does the Season 2 truck manage to be faster than last year’s model? 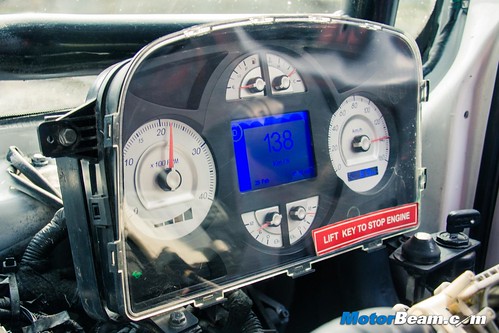 The key to the improved performance is reduction in weight. The Season 2 race truck weighs 350 kgs lesser thanks to lighter springs and fifth wheel coupling. The company has also reduced the chassis height by 55 mm by altering the springs. There is so much toque on offer that you can get going from standstill in third gear and there is no uneasiness at all. The gearbox is a bit hard to operate and you do end up hitting third instead of first, the clutch is light though. The transmission requires efforts to shift and since redline comes in under 2300 RPM, you need to be shifting a lot of gears in quick time. 0-100 km/hr takes 23.37 seconds, coming up in fifth gear. As you guessed it right, there is massive low and mid-end grunt but absolutely no top-end thrust. In-gear acceleration is amazing though and the Prima pulls with a lot of thrust to high speeds. 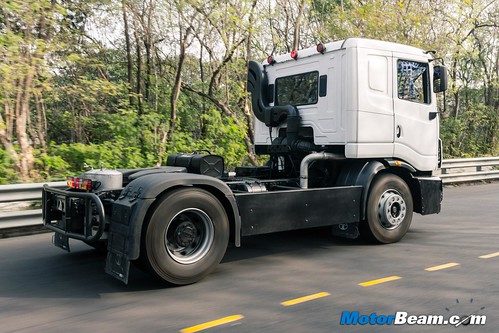 Staring this truck is also a fun affair as one needs to push the key inside and it starts, something like a push button start but in this one, you press to start. Get off the line with a bit of revs in first gear and the four rear wheels spin, as you grab the lever to quickly get into the next gear. The truck does sound very sporty and feels like it’s going faster from the outside than what you feel inside. 100 km/hr in top gear results in 1600 RPM on the tacho while at 80 km/hr, the needle hovers at around 1300 RPM but this truck ain’t meant for cruising, it’s meant to be driven flat out. 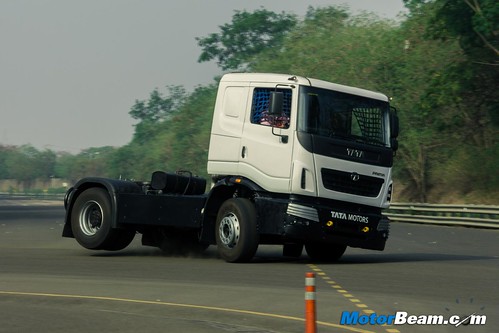 Corner hard and the rear wheel lifts, this is at a speed of 40 km/hr

Driving Dynamics – The Tata T1 Prima Racing Truck weighs a hefty 6.8 tonnes and power is channelled to massive 315/80/22.5 all steel radial tyres from JK. The 4×2 tractor gets increase in caster on front axle (from 2.4 degrees to 6.5 degrees), a new rear axle ratio and improvement in differential lock arrangement. The truck is easy to drive and is quite sure-footed around corners but there is a lot of body roll and cornering hard will result in the rear wheel to lift. Reaching 140 km/hr doesn’t take as much time as it needs guts because there is little stability post 100 km/hr and the vehicle feels hairy. 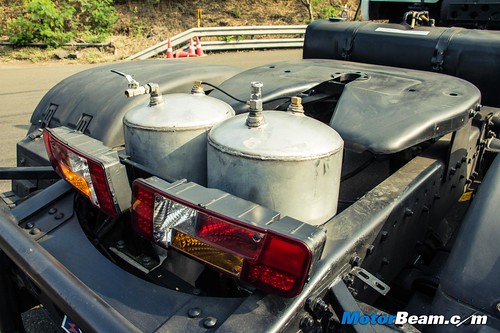 That is the air pressurised system for the water tank, it cools the brakes

In fact, it tends to feel a bit floaty at high speeds and one can’t brake hard because the brakes are pneumatic and will lock instantly if you stand on the pedal, so one needs to judge braking carefully. The brakes are cooled with an air pressurised system that has a 120-litre water tank (previous season truck has an electric operated system with a 90-litre water tank). The bigger dia sport steering has some feedback but becomes lifeless as you gain speed. Ride quality is good but who cares about it anyways on a racing truck? 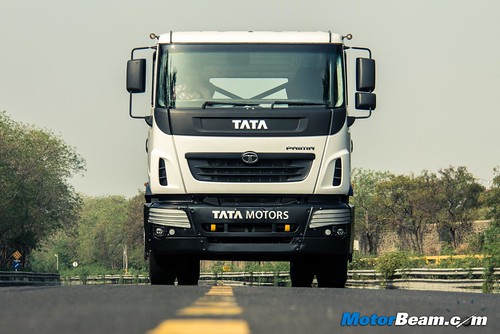 Verdict – The Tata T1 Prima Race Truck is a whole lot of fun and kudos to the company for organising truck racing in India, something which is unheard off in the sub-continent. While this truck isn’t for sale, it shows that one can enjoy driving a truck as it is as much fun as driving a fast car of fast bike. While we did not expect much from the Tata T1 Prima, it certainly surpassed our expectations. Now you know why truck racing is so popular in many parts of the world and given Season 2 of Tata T1 Truck Racing Championship to be bigger, we only expect the trend to catch up in India in the future. 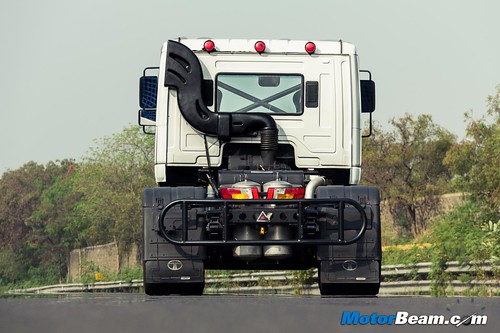 Look at that exhaust, it sounds very sporty because it’s a freeflow system