The C-segment has been witnessing a very thorough and intense battle since the past few years. The Honda City has always reigned the market but Hyundai followed up closely with the Verna which did manage to overtake the former in sales. With the fourth generation City in the market, the battle grew even more interesting. Maruti then dropped a bomb by launching the Ciaz which sold in great numbers for the first couple of months and then sales dipped down slightly and settled at number two position in the segment. The Volkswagen Vento is a very worthy contender in this segment but unfortunately it didn’t really sell as much as its rivals thanks to a lot of reasons like poor after-sales perceptions, limited features, etc. Now, the German auto giant has updated the Vento again and it comes across as a very good package and it might just hit it off with buyers in this segment.

Motor Quest: Volkswagen earlier sold only premium products in India, like the Jetta, Passat, Beetle, Touareg and Phaeton. The company then targeted the mass-market by launching the Polo premium hatchback in 2010 and subsequently the Vento sedan. The vehicle has received a lot of changes in the past and the current Vento is significantly different than the first ever Vento that entered the Indian market. 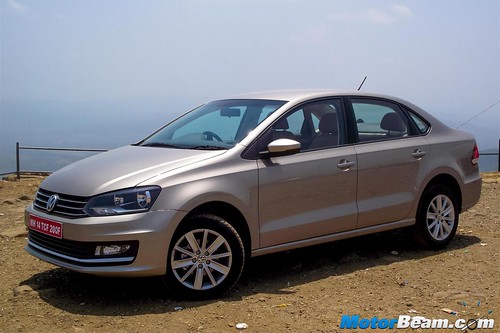 The front face looks very clean and yet not boring

Exteriors – The Vento has always been known for its understated appeal. This sedan is preferred by all those who like minimalist styling. The front of the Vento looks premium while the side profile is pretty much simple without any overload of lines. The rear again has a very simple design. The previous Vento came with circular fog lamps while the facelift now gets rectangular lamps. The fog lamps also have an integrated cornering light function which comes in quite useful on dark corners or even tight ghat sections. 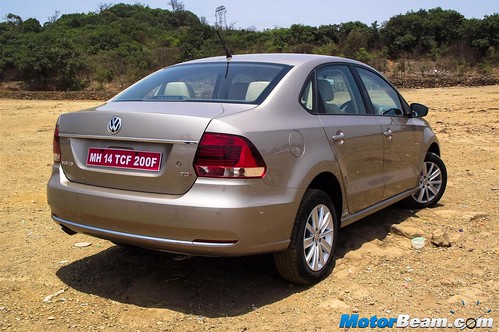 The rear gets chrome bits and new LED tail lamps

The cosmetic changes that appear on the 2015 Vento include a new bonnet, new bumper, new grille, redesigned front airdam, chrome strip on the front and rear bumpers, door handles with chrome trims, electrically folding ORVMs with LED indicators, new tail lights, chrome garnish on boot lid, chrome exhaust tip and a soft touch release button for the boot. We think Volkswagen has done a splendid job with this update and there seems to be no reason to complain. 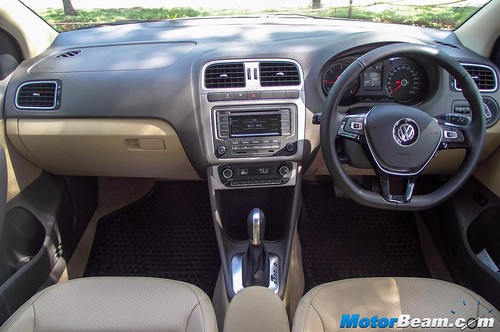 Interiors – The interiors of the Vento have always been pretty much simple and a tad boring. They don’t appeal as much as the City or Ciaz’s interiors. From this facelift onwards, the Trendline and Comfortline models will get a Cloud Titanschwarz colour scheme while the Highline variants get a Walnut Desert Beige theme. The instrument cluster packs in a lot of info and everything is easy to read. Volkswagen has added features like cruise control, cooled glovebox and a dead pedal in the Vento now. The cabin is quite spacious and the seats also offer good comfort. The AC cools the cabin effectively and the infotainment system works well too.

Performance – The 2015 Volkswagen Vento comes with the same engines as the previous model. The 1.2-litre TSI turbocharged petrol engine is mated to a 7-speed DSG transmission. The gearbox is very smooth and the quality of shifts is top-notch. The engine churns out 105 PS of power and 175 Nm of torque. The low-end provided by this engine is good and power delivery is very linear once the turbo kicks in. Even the turbo lag is negligible and cannot be felt much. The mid-range is again very punchy and you never feel that the Vento has run out of power. Highway overtaking manoeuvres are also taken care of nicely. The sedan cruises at 1900 RPM in the top gear at 100 km/hr. We got a fuel efficiency of 10 km/l in the city and approximately 13 km/l on the highways with a lot of spirited driving. Such mileage figures are very good for a proper sedan with a turbo’ed petrol plant. 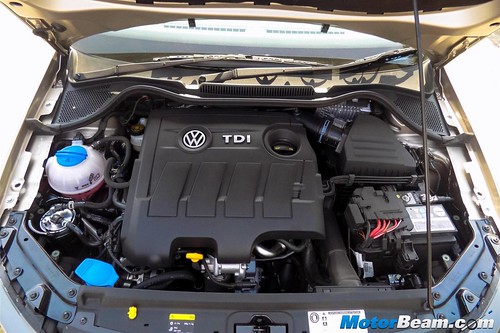 The TDI engine is quite frugal and gives good performance

The TDI + DSG combination is the best one available while the 1.2 TSI is no slouch either

The diesel engine is a 1.5-litre TDI unit giving out 105 PS of power and 250 Nm of torque. The oil-burner is available with a 5-speed manual and a 7-speed DSG transmission too. The turbo kicks in at a shade below 2000 RPM and after that the boost is fun and addictive. The vehicle cruises at 100 km/hr at 1800 RPM in the 5th gear with the manual tranny. We got a mileage of 13 km/l in city driving and a bit more than that on highways. The manual gearbox is slick but the clutch feels a bit hard compared to rivals. 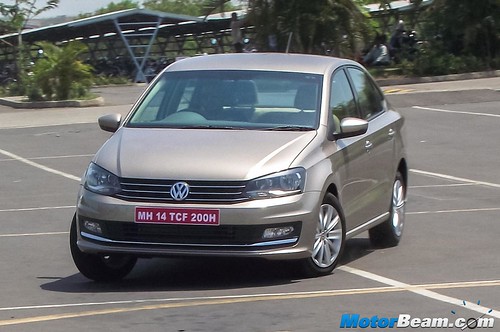 The Vento has a good balance of ride and handling

Driving Dynamics – The Vento has always been known for its dynamic capabilities. It is a very involving car to drive. Handling is amazing and ride quality is good too. The suspension set-up is slightly stiff but it helps negate body roll. The sedan comes with Apollo Alnac tyres and these offer superior levels of grip on various types of road surfaces. The Vento moves over bad roads with ease but at slightly high speeds, it does feel a little unsettled. The steering feels good and gives you lots of confidence and braking is also very sharp. 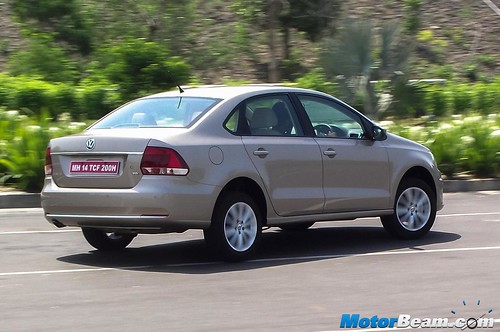 Volkswagen really lacks when it comes to service

Safety and After Sales Service – The Volkswagen Vento comes with two airbags and ABS. The vehicle has strong build quality and the cabin feels like a safe and assuring place to be in. Talking about after-sales service, Volkswagen doesn’t really excel much in this department. The company really lags behind its rivals by a huge margin when it comes to after-sales. There have been numerous complaints about Volkswagen giving sub-standard levels of service while the company’s service network is also not as widespread as rivals. However, the German carmaker is expanding its reach across the country. They currently have around 118 dealerships across 100 cities in India. 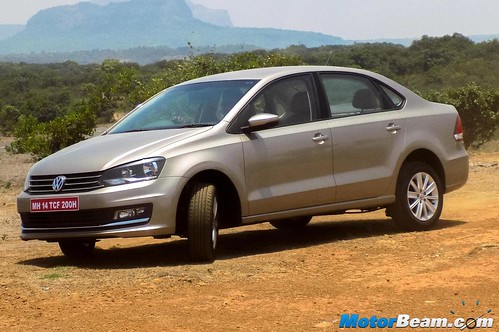 The 2015 Vento makes a good case for itself

Verdict – The Vento has always been a pretty good vehicle and this update just makes it better. The sedan excels when it comes to looks, interiors, driving feel and a lot more. It only loses out due to its poor service network and the slightly high cost of spare parts and maintenance as compared to rivals. Volkswagen also has a not-so-good perception when it comes to reliability. The DSG transmission really rocks and trumps over any other automatic available in this segment. You should definitely consider the 2015 Vento if you prefer build quality, handling and the quick tranny over better resale value and slightly cheaper service costs that rivals offer.

The Vento is an excellent car and the 1.2-litre TSI and 1.5-litre TDI engines are very punchy. The DSG gearbox is slick and a boon when we see the traffic situation in our country today. The only thing that Volkswagen needs to work on is its after-sales network and making available spare parts at more reasonable costs. 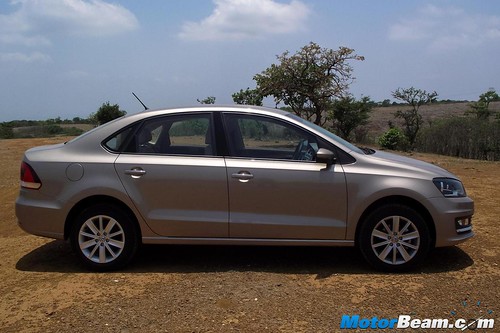 * Poor after-sales service when compared to rivals
* Slightly expensive cost of spares; resale value not as good as Honda and Maruti