The City has been the king of the C-Segment sedan space in India since its launch in 1998. Every new generation launched has been an instant hit in our country. Same was the case with the current fourth generation City, which is also the first diesel powered City in India. However, recently the sedan started feeling some heat from the Maruti Ciaz because of its better value proposition. Now, Honda has introduced the City facelift with a long list of cosmetic and feature updates. We find out how drastic the new changes are.

Motor Quest: Honda entered the Indian market in 1998 with the launch of the City. The City has been tremendously popular in India due to the comfort, performance and the reliable Honda badge. Currently, the City is in its fourth generation and the Japanese automaker has just launched the mid-life facelift of the car. 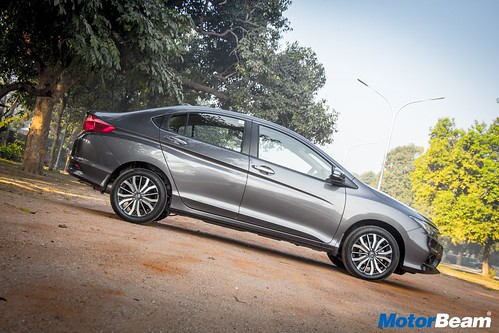 Exteriors – The front profile of the new Honda City gets a wider grille and a thick slab of chrome which makes it look reminiscent to the new Honda Civic. The headlights are now All LED units that get a highlight of daytime running LEDs too. The bumper is now more carved out which lends the new City a sporty look. Even the fog lamps are LED units. The side profile now gets a much needed update. Gone are those bland looking 15-inch alloys, now the City gets updated with shiny new 16-inch diamond cut alloys that look fantastic! 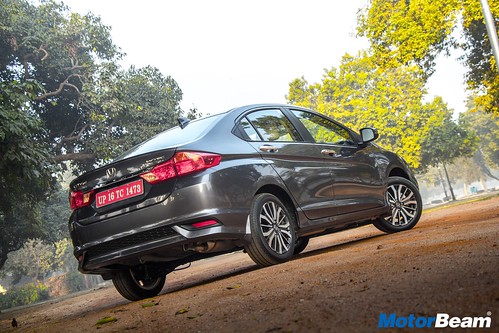 The rear just gets revised tail lights and bumper

The subtle changes to the exterior makes the City more presentable

Coming to the rear, there are new LED tail lights, a boot integrated spoiler with stop lamp and a revised rear bumper that adds to the freshness. Sadly, only the ZX trim gets LED tail lights and the petrol manual version (which we were driving) isn’t available in ZX. The overall styling makes the City look complete and a bit more shiny with a touch of fresh styling elements. Though, there are not many drastic changes on the exterior for a layman to differentiate.