MINI is a brand synonymous with making cars which are small, nimble and fun-to-drive. All this while not being too expensive. The latter part doesn’t stand true for the Indian market as all the models cost quite a lot of money and their options are obscenely priced too. India being a country where people prefer practicality over everything else, it is the Countryman which manages to find the most homes out of the lineup. To cater in a better way to this clientele who wants space in their MINI, the British brand has launched the Clubman in India. Going against the very ethos the brand is known for, does this car have what it takes to be called a MINI? 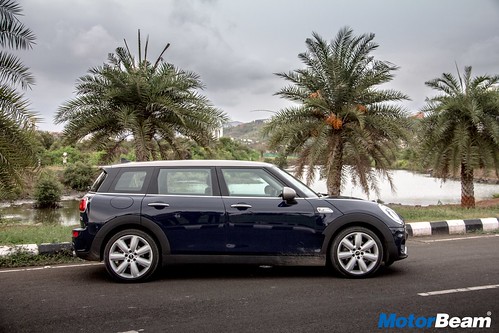 Exteriors – Look at the front fascia and an uninformed person would be hard pressed to know the Clubman apart from its stablemates. Sure, it is a fair bit wider than its siblings but the basic design philosophy is the same. The clamshell bonnet, the headlamps, the grille, all are typical MINI fashioned. The S badge on the grille signifies that the car has enough firepower under the hood, more on this later. Move to the side and the story changes quickly. The length immediately becomes evident and makes for quite an unflattering view, something which is very rare when it comes to MINI. However, the most unflattering side of the longest MINI has to be its rear. 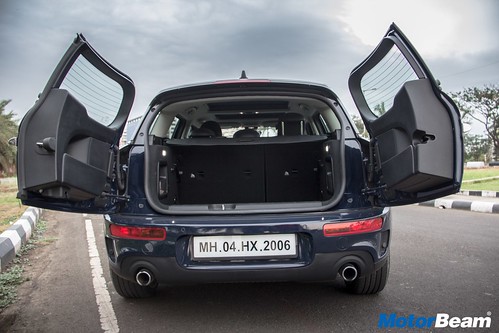 The twin tailgate design coupled with horizontal taillights would make one believe that this isn’t a MINI. It is only the badges which would make you believe it is one. While the tailgate design is very practical, practicality being what this car is all about, it looks awful and also hampers rearward visibility while driving. Both the tailgates are loaded with badges but I would have preferred simpler and uncluttered badging. For the ones getting this car, it is best to buy it in a darker, less noticeable shade because this isn’t a car you would want people to stare at. 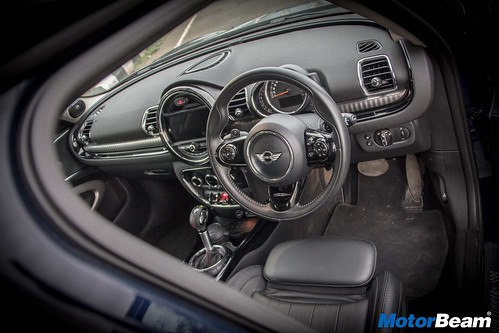 The interiors are standard MINI affair with an all black cabin

Interiors – Move to the inside of the Clubman Cooper S and it is typical MINI fare, at least at the front. The dashboard, the seats, the steering wheel, all feel very familiar to me and pretty similar to the Cooper S Convertible I drove about a year ago. The biggest plus point of the increase in the dimensions of this car are seen on the inside. All the increased dimensions have liberated a lot of space inside the cabin, something which MINI is not known for. I welcome the additional room because it makes it a really practical family car. As is common with the BMW owned brand, interiors come sparsely equipped as standard and one will have to tick a fair bit of options to make it a desirable place to be in. 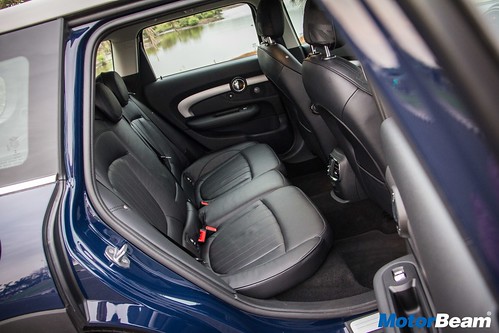 The biggest USP of the car is the space inside, most of which is seen in the rear bench. The rear seats are very comfortable for two passengers with enough headroom, shoulder room and good amount of legroom. For the first time ever, two 6-feet people can sit behind each other in a MINI. The cabin feels very roomy thanks to the panoramic sunroof which lets in a lot of light. With the rear seats in place, the boot capacity is an accommodating 360-litres. Need more space? Fold the rear seats down and you have a whopping 1250-litres of space! If there’s one element which will help this car sell, it is the interior space.