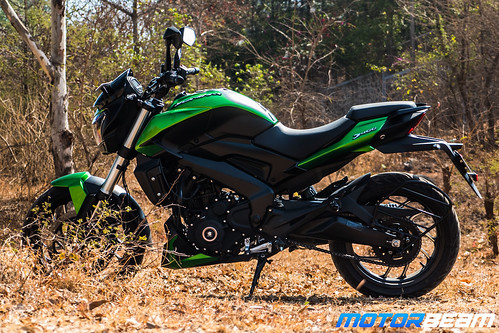 Ergonomics and riding haven’t been altered, they are exactly the same

Ergonomics – The ergonomics stay exactly the same between the old and the new version of the Dominar 400. There is a slight change when you look at the traffic behind you as the new mirrors have a better view of what’s behind. The handlebar, seat height and pillion seating position remain the same and retain the same comfort levels. The seating posture is still upright, with centre set foot pegs that provide a comfortable riding position for touring. The seat for the pillion still remains quite slim, making it a task to find a comfortable spot to sit on. The handlebar weights are now wider and heavier aiding to slightly better ergonomics. 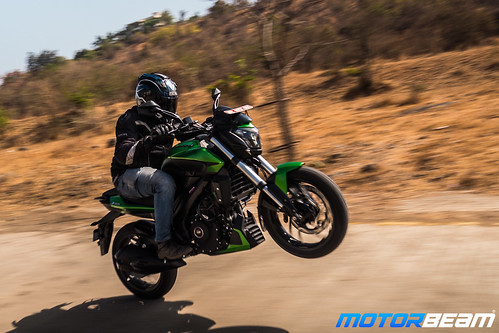 The motor has an even better punch, it effortlessly lifts a wheel

Performance – There is a huge difference in terms of power between the older and the newer versions of the bike. The engine gets a 5 PS bump in power, thanks to the DOHC, engine mapping and the new double-barrel exhaust setup. The compression ratio is now increased for more power, making the engine feel pretty lively. It has a very strong mid-range and a good low-end too. The bike still redlines at 9500 RPM, which is not much, but still pulls very well. The bike reaches 100 km/hr in 7.1 seconds which is almost a second faster than the previous model. The VBOX tested top speed has also increased by 8 km/hr which now comes to 156 km/hr. The gearing and the clutch feel remains the same, but the update in the top speed means that you can go faster. Bajaj has also increased the power-to-weight ratio of the bike to 217.4 PS/ton, making it a tad bit sportier. 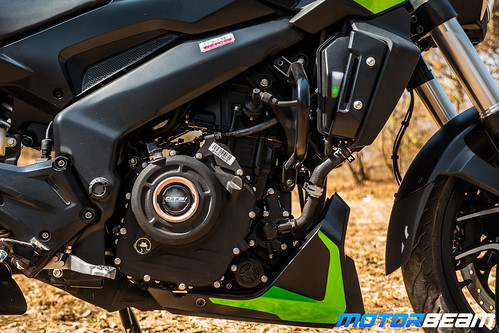 The motor feels quite refined compared the previous version

Cruising at 100 km/hr has become a lot smoother and enjoyable as the throttle response has improved a lot. If you feel like stretching your legs, you can do it without breaking a sweat on the bike as it now accelerates pretty quickly. The vibrations have reduced drastically and there is almost nowhere that you can sense it. Although there is a slight buzz at the footpegs and the seat, vibrations only come into the picture when you are closing in on the rev limit. The exhaust now has a very throaty and louder note to it, the throaty note continues till the rev limit, making it enjoyable to ride.

Riding Dynamics – Riding dynamics are now much better due to a heavier front end thanks to the USD forks, the overall weight has also increased, but to tackle that, there is that more powerful engine, which doesn’t let it feel dull. The bike dips into corners pretty nicely with nice cornering stability and holds the line pretty well. The front suspension has a better feel to it through the handlebar. The preload adjustable monoshock at the back is softened up a bit and feels a bit weighty when you have a pillion or some luggage at the back, but is more comfortable than the KTM Duke series. The USD forks have been borrowed from the KTM Duke, which is a bit harder now when compared to the previous telescopic version. Whereas, at the rear, the spring index has been changed, making it softer. 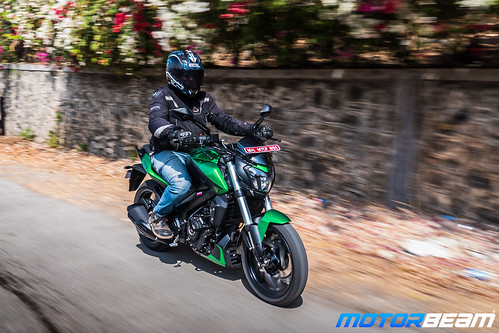 Tips into corners well and holds the line too, suspension setup is now more compliant to touring duties

The braking has improved a bit because the front disc now gets a radial caliper and has a nice bite to it. The disc size remains the same, but with better stopping power. The dual-channel ABS unit is still on offer and is a non-switchable one. The MRF tyres that were also offered previously don’t grip that well. Now that there is a bump in power, you can feel that the tyres don’t provide that assurance of sticking to the road. The bike tends to lose grip under heavy acceleration and also when you hit the brakes too hard.