The Porsche 911 is a true delight to drive, one can just not get enough of it!

Porsche 911. The name brings out the car enthusiast in each one of us. Touted to be one of the greatest sports cars of all time, the 911 has been the default choice of wealthy petrolheads for years. In 55 odd years, the Porsche 911 has set a standard for other supercars to follow and has exceeded it with every generation without changing much of the car’s core credentials. The new Porsche 911 has a huge task of maintaining the tradition of sheer motoring excellence of its predecessors. Can it live up to it? Let’s find out.

Motor Quest: The first Porsche 911 was introduced in 1963 and it was also codenamed as the ‘911’. The code names have changed but Porsche decided to sell the car with the ‘911’ tag since then. It’s instantly recognisable silhouette, raspy sounding flat-six engine, it’s brilliantly judged dynamics have made it an icon of sorts over the years. It is also one of the best selling sports cars at the moment and has enjoyed great success in India too. 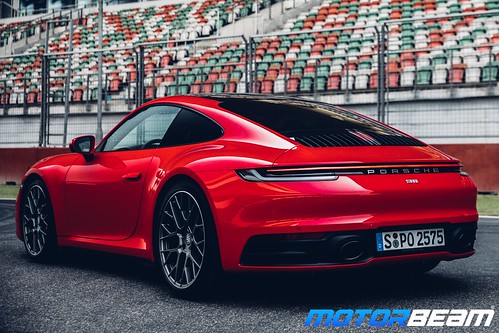 The 911 looks drop-dead gorgeous and look at those tail lights!

Exteriors – The Porsche 911 is one of the most recognisable cars ever built. Credit goes to how little has the car departed from the original despite boasting of many modern elements. The eight generation 911 is no different then. Some people will find it tricky to distinguish the changes but that is exactly what has made the 911 special for all these years. The changes are super minimal and they are intended to make the already stunning car be more with the times. The front is more aggressive with more pronounced spitter element and larger air ducts. The LEDs below the headlights are slimmer and like the older car, they double up as turning lights. The bonnet is flatter and more squarish than before with subtle creases. The headlights remain as round as ever with the quad-DRL set-up, a trademark of modern Porsches. The headlight is beautifully detailed with neat ‘Porsche’ badging on the inside. 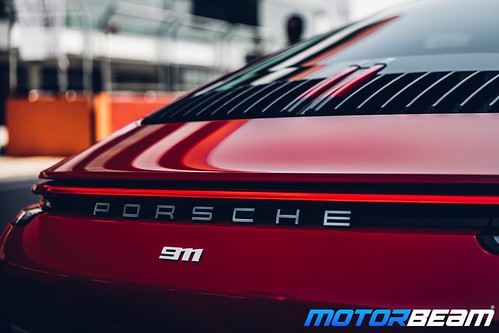 The side is very elegant and the wheels, nearly all the styles of it, look stunning. The car has the same wheelbase as the previous generation, so it looks nice and tight from the side. There is a flow to the car’s side profile which is only complimented by the smartly executed wing mirrors and prominent wheel arches. Also worth noticing are the deployable door handles which some people may find a bit gimmicky but they add that effortless feeling to the car’s side. The rear is the most busy looking but by no measure ugly looking. The continuous strip of LED taillight is another signature Porsche design touch. 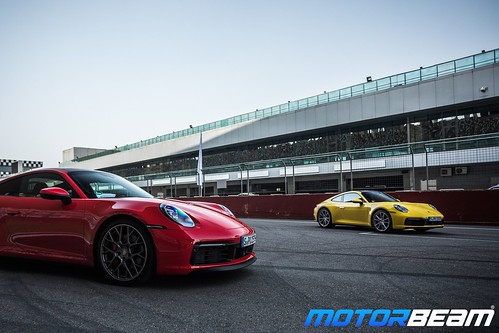 The black valance that houses the air-ducts for the engine, the oval exhaust pipes and the heavily structured rear bumper give the hint of the power underneath. The new 911 is slightly wider than before and as a result all the elements at the rear feel in sync with the rest of the design. Porsche has yet again managed to subtly yet effectively redesign the 911. It is a beautiful looking supercar that will look equally stunning in an office parking lot as it would on a race track. We would prefer the brighter colours in Porsche’s extensive pallet for the 911.

Why I Love The Indian Used Car Market

The Maruti XL5 has been spotted on test ahead of launch later this year. Maruti is preparing to launch the XL5 hatchback, which is essentially   END_OF_DOCUMENT_TOKEN_TO_BE_REPLACED