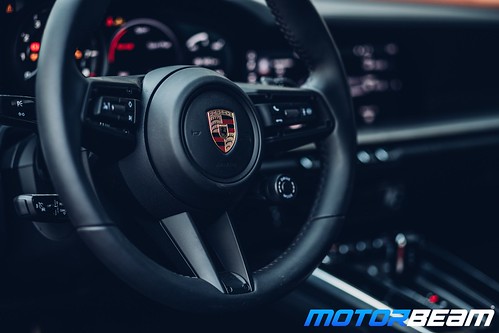 The well-appointed cabin oozes of sportiness

Interiors – The cabin of the 911 is very inviting with minimalistic and fuss free design. Unlike the exterior, the changes to the interior are extensive. Whereas the last generation Porsche 911 had a conventional layout, this one seems to be breaking the norms. Like all the new Porsches, the screen takes the place of pride, right in the centre of the dashboard. The infotainment screen is neatly housed in the contoured dashboard and has a brilliant resolution but in a car like the 911, the large size of it feels like a tech overload. Since everything can be controlled by the touch-screen infotainment system and a few controls on the steering wheel, the cabin is far less dependent on buttons. The major criticism of the previous few generations of the 911, that is of having too many buttons, has been finally sorted. Below the screen, you have usual controls and the AC-vents. The toggle-controls for changing modes and the climate control switches look and feel very premium to operate.

However we did not like a few things. There is only one deployable cupholder on the passenger side instead of two, like in the previous car. The driver’s cupholder is placed far-back on the centre console and it is not as practical or as well designed as the openable twin-cupholders of the last-gen 911. What stands out like a sore thumb is the gear selector that is the size of a key. It looks too small and does not feel special to operate. It changes gears. Shouldn’t it be more substantial? 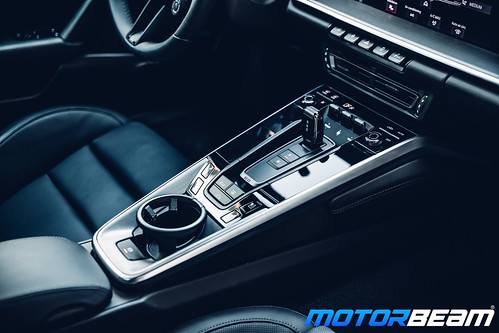 The new 911 is loaded with a lot of gadgetry

But those are the only negatives we can hold against the cabin of the 911 and they are not at all deal breakers. The quality is utterly impressive and it feels incredibly polished and well appointed for a sports car. Cupholder aside, the ergonomics are simply terrific. The driving position is superb and everything falls to the hands easily. There is also a variety of steering and seat adjustment to suit your needs. The seats are very supportive and long journeys will be comfortable. The rear seats is what makes the 911 more versatile than other sports cars but the rear seats, though larger, are still only suited for really small kids.

The 5-gauge layout of the instrument cluster on the 911 is a true beauty!

The instrument cluster is almost completely digital showing you a ton of information but Porsche has tastefully kept the rev-counter analog and, like always, is placed at the centre. The rev counter with the 3D effect is a thing of beauty in itself. The whole instrument cluster looks fantastic upon start up and we love how Porsche has kept the traditional 5-guage layout and not made it into a plain and continuous digital display. And if you opt for the Sport Chrono package, you also get a nifty stopwatch atop the dashboard.

The equipment list is vast but there is so much more that you can add. In addition to the usual navigation, leather and electrically adjustable front seats, climate control, you can choose a fancy Burmeister sound system, more Alcantara, brushed aluminium, sportier seats as part of the options list. Mind you, the options are exorbitantly priced and will increase the price of your 911 by some million rupees quite easily. Overall, we are thoroughly blown away by the near-perfect quality and feel good factor of the Porsche 911’s cabin. It is one of the best interiors we have seen in a sports car and certainly betters the generation it replaces.

While the sales are extremely low, Maruti keeps the top spot. The May 2020 hatchback sales are quite terrible to see. Usually the sales are 10   END_OF_DOCUMENT_TOKEN_TO_BE_REPLACED

QJ SRK 600 is a Benelli TNT 600i under a new Chinese brand. While Benelli is an Italian motorcycle brand, it is now owned by Zhejiang Qianjiang   END_OF_DOCUMENT_TOKEN_TO_BE_REPLACED