India has an unending love for cruiser bikes and the same is reflected in the sales of Royal Enfield motorcycles. The British brand’s most successful model is the Classic 350 and even though the Thunderbird 350 makes a better rival to Bajaj Auto’s Avenger 220, the lower price and higher sales of the Classic made us do this comparison. Both bikes have quite a few things in common and both are affordable cruisers with the lack of modern hardware but carry a ton of chrome to win over buyers. Is it worth spending the extra Rs. 40,000/- for the RE machine or can you be happy with the Avenger Cruise 220?

Motor Quest: The Avenger has evolved from the Eliminator and the 220 model was launched in July 2010 with the recent update coming in November 2015. The Classic 350 is the top selling motorcycle for Royal Enfield in India, accounting for 80% of the British brand’s sales. 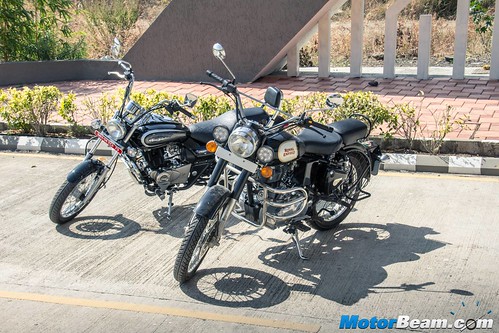 The RE Classic does have more presence than the Avenger

Styling – The Classic 350 as the name suggests, has a classic design which packs in a lot of retro appeal while the Bajaj Avenger Cruise 220 also looks similar to its predecessor which was on sale for a real long time. Both bikes have a lot of chrome in common, with the Avenger having an excess of it. Both these motorbikes use similar elements so the headlight is round and so are the indicators. Both use chrome rear shocks and have muscular tanks with the tyres mounted on spoke wheels. 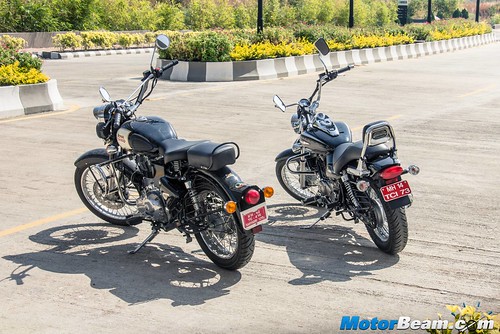 Retro styling elements on the Classic make it stand out instantly

The Classic does look more beefy and with five colour options, it’s the better looker of the two. However, fit-finish on the Classic isn’t great with the Bajaj fairing slightly better in this regard. Many buy Royal Enfield bikes for the looks alone and that’s something the company has mastered with the colour schemes it offers like the Desert Storm and Chrome. The Avenger 220 can be bought in Street guise too which gives it a very Harley-Davidson like appearance. That said, the beefier looking Royal Enfield Classic is the more sought after machine as far as styling goes. 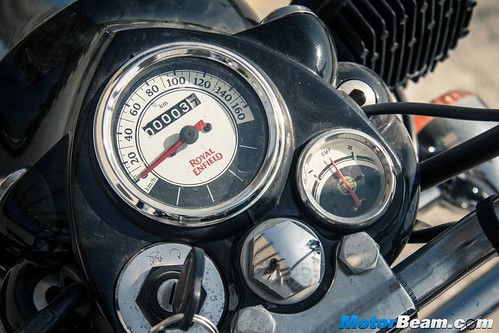 Instrument Cluster and Switchgear – Both bikes feature a very basic console but the Classic 350 gives the word basic an all new meaning because it doesn’t even get a fuel meter. In fact, the only thing on the Royal Enfield bike is the speedometer, odometer and battery ampere indicator, the latter most helping with judging how to kick start the bike (no kick start on the Avenger). 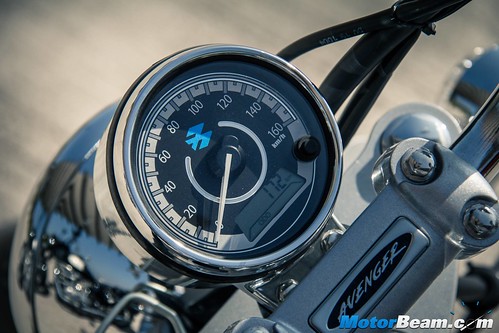 Yes, there is no trip meter either while the Bajaj Avenger gets the same (in an LCD) along with a fuel meter and tell-tale lights. Switchgear quality is decent on both bikes with the Royal Enfield Classic 350 getting a handle-lock placed inconveniently and the Bajaj Avenger 220 has the ignition switch near the engine. 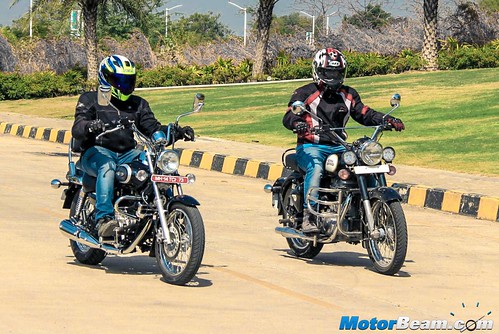 Sitting upright, both these cruiser bikes are high on comfort

Ergonomics – One sits upright on both these cruiser motorcycles and they offer good comfort to riders of all sizes but the Classic is more comfy for highway runs. The footpegs on the Avenger Cruise 220 are further front-set and both bikes get rubber mounting to curb vibrations. The Classic 350 doesn’t come with a pillion seat as standard as the same is an after market fitment while the Avenger comes with a single-piece seat with back support. Pillion comfort is better on the Classic and the spring seat gives the rider more comfort. Both these cruiser motorcycles come with useless mirrors as the one on the Bajaj aren’t positioned far out wide while the Classic’s round mirrors offer good visibility but vibrate like crazy once you pick up speed. 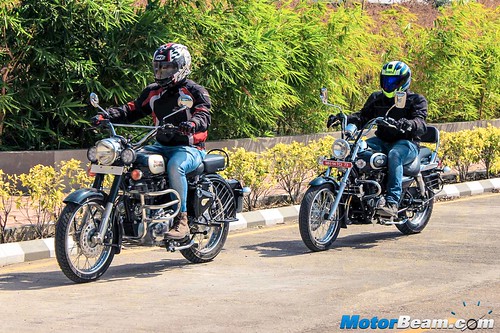 Performance – Both these motorcycles employ twin-spark, single-cylinder carbureted engines with the Avenger 220 displacing 219.9cc, producing 19 PS and 17.5 Nm. The Classic 350 has a higher displacement and while its 346cc air-cooled motor only produces 20.07 PS, it has drastically more torque on offer of 28 Nm. What this results in, is the Classic 350 feeling faster than it is, having an extremely punchy mid-range which the Avenger 220 simply can’t match. But the Bajaj bike has a faster revving powerplant with a higher redline and feels more refined in comparison, having better NVH. 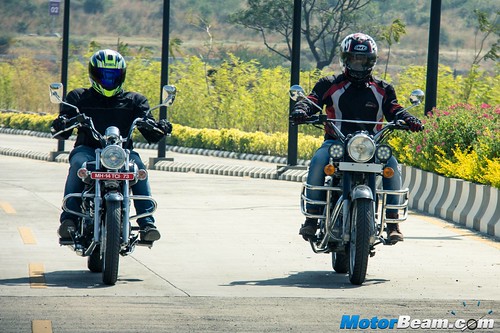 Neither bikes are good in terms of top-end NVH levels

While both bikes have some sort of vibrations, those on the Royal Enfield are just unbearable, restricting one to ride under 100 km/hr although both these motorcycles will hit an optimistic speedo indicated 120 km/hr. So the Avenger 220 Cruise is more at home at triple digit speeds, making it the more comfortable cruiser for highway runs. It’s also a clear second faster in the 0-100 km/hr run with gearshifts being much smoother. Where the Classic 350 beats the Avenger 220 is the exhaust note, the RE has the thump which some find exciting while the Avenger just sounds like a Pulsar 220. The Bajaj cruiser is slightly more efficient returning a couple of kms more per litre. That along with the fact that the Avenger has a 0.5-litre bigger tank gives it a slightly longer tank range. 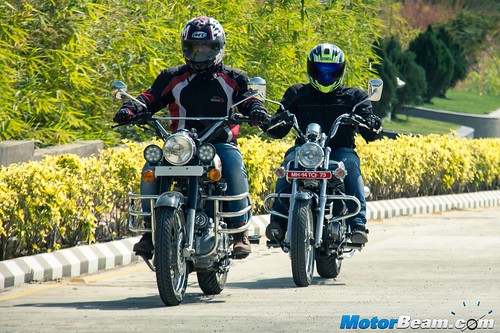 The Classic 350 has a better ride quality, it tackles bad roads better

Riding Dynamics – The Classic 350 has a softy set-up suspension while the Avenger has some stiffness but it’s the Royal Enfield bike that has the better ride of the two, taking bad bumps in its stride with more composure. Weighing 30 kgs more than the Avenger, the Classic 350 inspires more confidence by being stable at speed but the Cruise 220 has better handling as it feels more nimble to manoeuvre. 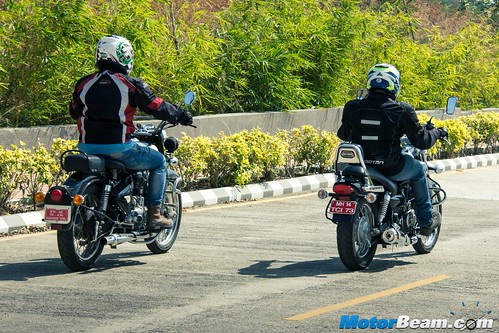 The Avenger 220 is more enthusiastic around corners with more feedback

The Avenger 220 also has smaller wheels but a 20 mm wider rear tyre gives it more grip and better dynamic ability. With a front disc and rear drum set-up on both bikes, it’s the tyres which play a big role in giving the Avenger better stopping power but both bikes have only adequate brakes. 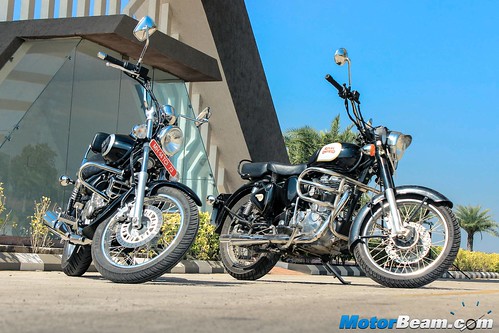 The Classic 350 feels overpriced in front of the Avenger 220

Verdict – The Royal Enfield Classic 350 is indeed the better motorcycle here with some genuine cruiser traits that make it fun to ride and also good to flaunt. But the Avenger Cruise 220 offers some of the feel at a price which is Rs. 40,000/- less, making it our choice among the two. For Rs. 1.4 lakhs, we would prefer to buy other motorcycles which are better in almost every parameter.

“I have never been a fan of cruiser motorcycles and specially not of bikes which only appear to be cruisers, these two are of that category. Although both are pseudo cruisers since neither are apt at cruising out on the highway, the Royal Enfield Classic 350 is more cruiser than the Bajaj Avenger 220 Cruise. But at the higher price of the British branded motorcycle, the Indian effort is definitely much more value for the money.” – Faisal Khan, Editor, MotorBeam.
“The Avenger 220 can do everything that the Classic 350 can, at a cheaper cost but the Royal Enfield motorcycle has something the Bajaj bike can’t boast off, street presence. Most buy these bikes to feel proud while riding and it’s the Classic which feels better in that aspect. The thump from the engine can be melody to some while the sheer price difference between both these machines makes me plunge for the Avenger.” – Dhanil Vira, Road Tester, MotorBeam.