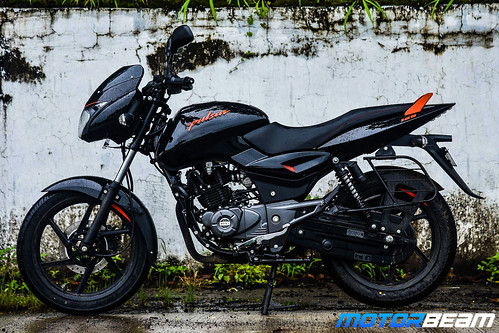 Ergonomics – Pulsars have always been known for great riding comfort and the Pulsar 125 Neon is different. It gets a single-piece seat which is not very comfortable as it feels a bit hard and needs more cushioning. But the centre-set footpegs and easy-to-reach wide clip-on handlebars provide a relaxed upright seating position. This combination also offers a slightly leaned-in posture for the rider. It has a saddle height of 790 mm which is pretty friendly for both short and tall riders. The grab rail feels sturdy and the big rearview mirrors offer a good view of what’s behind. Ergonomically the Pulsar 150 and the Pulsar 125 are perfect sporty-commuters. 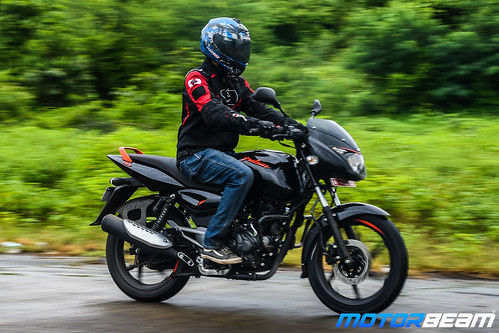 Performance – The Pulsar 125 Neon is powered by a 124.4cc BS4 compliant DTS-i engine that has been sourced from the Pulsar 150 Neon with a shorter stroke. So basically, the 125’s engine is an over-square engine where the stroke is shorter than the bore. As the stroke is shorter, the engine revs fast and also builds up power faster. The maximum power produced by the engine is of 12 PS at 8500 RPM and maximum torque of 11 Nm comes at 6500 RPM. Both the figures are 2 PS and 2.4 Nm lesser than the Pulsar 150. Even with such power figures, it is a powerful bike in its segment. The low-end and mid-range performance are strong enough, thanks to the ExhausTEC system that has improved the torque output. But the motor lacks the punch near redline and also lacks the initial pickup because of the weight of the motorcycle. 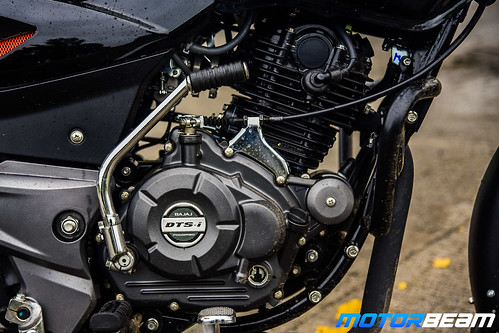 The motor feels quite refined and has enough grunt too

NVH levels are kept under control and the engine feels quite smooth and refined thanks to the counter-balancer. We did not experience many vibrations unless the motorcycle crossed 80 km/hr speed, which were negligible. The outright acceleration of the motorcycle isn’t as impressive as the mileage claimed by ARAI which is of 57.5 km/l. In short, one can go cruising around over 650 kms in its small 11.5-litres fuel tank. The engine is mated to a 5-speed gearbox which is slick and crisp. Shifting of gears helps in smooth and easy cruising through the city and on highways. While the top speed is 105 km/hr, the motorcycle weighs 140 kgs and has a power to weight ratio of 85.7 PS/ton. 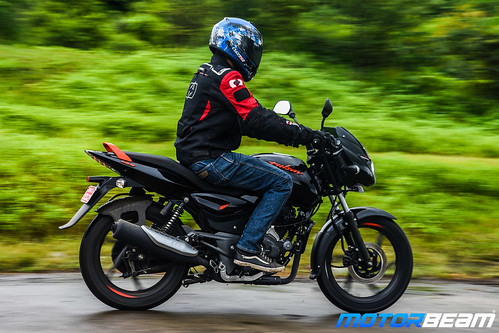 Stays planted but does not inspire much confidence while cornering

Riding Dynamics – The suspension, brakes, tyres are all carried over from the Pulsar 150 Neon. The motorcycle rides on a single down-tube frame. The telescopic suspension at the front and twin gas shocks at the rear offer a planted ride over bad roads and small undulations are soaked up very well. The longer wheelbase of 1320 mm helps a lot in straight-line stability. At 140 kgs, the Pulsar 150 Neon is no light-weight motorcycle and is only 4 kgs lighter than the Pulsar 150 Neon and around 15 kgs heavier than other 125cc bikes. However, the Pulsar 125 stays planted no matter what the road conditions are. 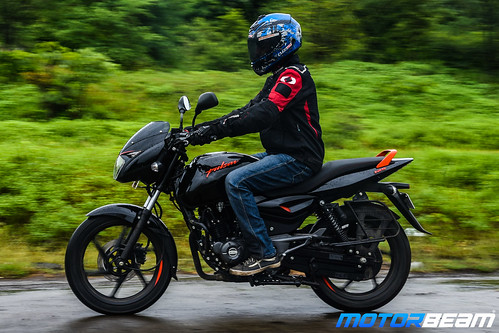 Seating comfort isn’t the best according to 125cc category, it’s rather sporty

The 240 mm disc brake at the front has great feedback while the rear 130 mm drum brakes do not have enough bite to them. What’s good about the brakes though is the addition of combined braking system. This system applies the front brake automatically on the application of the rear brake. But be sure to make proper use of both brakes as under hard rear braking, the rear wheel skids at times. The Eurogrip tyres on our test bike had adequate grip but nothing to write home about, however, MRF Nylogrips are also available which should perform better. The overall riding dynamics are sufficiently good for a 125cc commuter motorcycle.

News highlights of the day include Volkswagen, Triumph, Husqvarna and Bajaj Auto. Volkswagen T-Roc - The German carmaker showcased the   END_OF_DOCUMENT_TOKEN_TO_BE_REPLACED

Renault wants to go all guns blazing in the Indian market by creating new segments. Renault launched the Triber in 2019 and this 7-seater   END_OF_DOCUMENT_TOKEN_TO_BE_REPLACED