Bajaj always plays a different game. When the market is focused on street-fighters, Bajaj Auto brings a cruiser set of vehicles called the Avengers. Right now, the competitors are playing games with bringing performance motorcycles but Bajaj took an icon, the Indian warship INS Vikrant and created a mixture of a cafe racer and a commuter. The great warship completed its duty last year and Bajaj took a step forward by buying that steel and melting it to form the motorcycle’s tank. To keep the iconic appeal, a different concept which may please a few has been introduced and the name kept by them is nothing else but ‘Bajaj V’.

Motor Quest: The Bajaj V15 has its name coming from the invincible warship INS Vikrant which performed its duty till 1997 and was preserved till 2012. In 2015 the ship was decommissioned and Bajaj took the steel from it to make the tank of the V15. 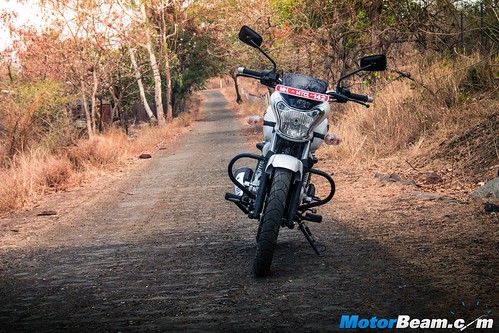 The trapezoidal headlamp is new, does not appeal to a lot of people

Styling – The Bajaj V15 has a unique appeal in the styling department. Combination of a cruiser with an instinct of a cafe racer and yet having hints of a commuter. The V15 looks like a pure combination of two different motorcycles. First glance at the motorcycle and you will notice the ill-favoured trapezoidal headlamp with some chrome edges and a nice small visor atop. Then comes the chunky steel tank that contains the steel from the INS Vikrant, while the fuel cap is finished in chrome having INS Vikrant text written on it. Holding onto the tank is the single piece seat that gets a seat cowl at the rear. Yes a seat cowl for a 150cc motorcycle! At the tail, the LED tail lamp and the mud-guard is something that may remind you of the Suzuki Intruder motorcycle. 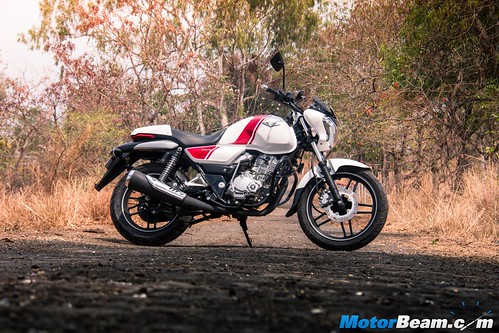 Design is kept simple, the colour scheme is attractive for the Bajaj V15

There’s no Bajaj logo on the motorcycle, giving the iconic V branding importance

Moving on from the top half of the motorcycle, the lower half sports 10-spoke matte black alloys with a fatter tyre at the rear, grey finished engine block and a black exhaust with chrome bits in the form of silencer guard and exhaust tip. There are lots of chrome bits around giving an attractive and a premium appeal. Everything looks quite proportionate except the headlamp which just doesn’t gel with the overall looks of the motorcycle. 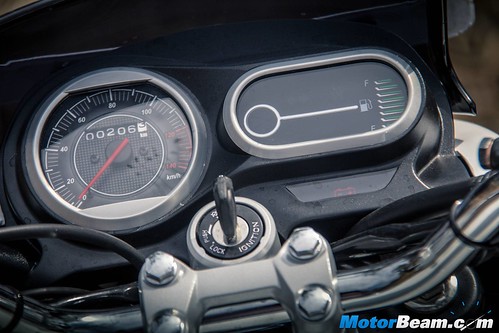 Instrument Cluster and Switchgear – Almost every new motorcycle in the current market sports an all-digital instrument cluster, while the Bajaj V15 gets an analogue meter and a digital fuel gauge which turns red once the fuel goes into reserve. There are LEDs for the indicator, high beam, neutral gear and not to forget the blue Bajaj logo but all these are barely visible in bright day light. There’s no tachometer on the console either. The finish of the switchgear is decent, the switches are easily usable but the commuter misses out on an engine kill switch. Cost saving is evident in this department to cover up the additional costs in the other departments. 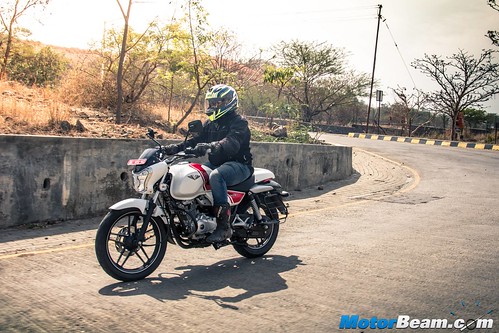 The Bajaj V15 has the perfect blend of commuter ergonomics

Ergonomics – The Bajaj V15 is a city commuter and ergonomics of commuter motorcycles are basically upright, with straight ahead handlebars and front-set foot pegs. The V15 has the perfect commuter ergonomics and an amazing seat. The seat is well cushioned and if you ride for a longer time, you feel as if you have sunk into the seat. The tank is big but not overly big and hence the legs stay comfortable. The pillion seat cowl is a removable one and can be removed with an allen key which is integrated into the key of the bike. Once the cowl is out, the pillion can sit comfortably. The rear-end gets a standard looking grab rail which was missing on our test bike. A strange dilemma one would face is that if a pillion comes and the cowl needs to be removed, where will it be kept? 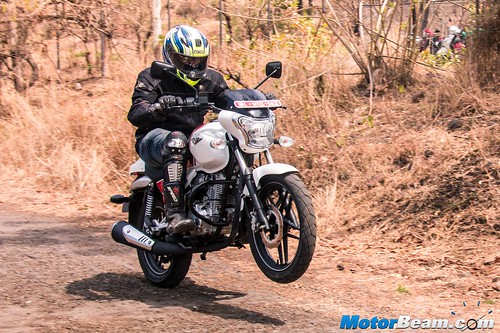 Performance – The Bajaj V15 is made for a person who doesn’t want to speed but requires decent performance for city riding. At the heart of the V15 is a new 150cc engine producing 11.8 BHP of power at 7500 RPM and 13 Nm of torque at 5000 RPM. The engine is mated to a unique all-up pattern 5-speed gearbox. This becomes easy for a layman to understand but for us it took time to adapt as we are more used to 1-down 4-up pattern and we kept hitting neutral. The clutch is light and the gear shifts are nice and slick. As we look at the figures, this new engine is torquey, providing the thrust at any gear at any RPM. 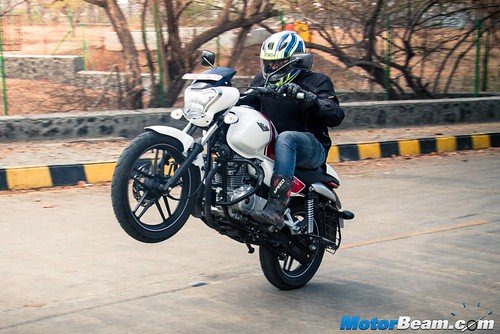 The Bajaj V15’s engine is very torquey in nature

The torquey nature of the engine makes the Bajaj V15 a great city performer and this one has ample amount of mid-range so one can manoeuvre in traffic without any gearshifts. Out on the highway, reaching triple digit speeds is a task, but the long gearing somewhat helps. First gear pulls till 40 km/hr, second till 60 km/hr and third takes you a notch above 80 km/hr while fourth and fifth help in attaining the ton. As the engine is new, there were few vibes on the motorcycle which started from 40 km/hr and stayed all the way up to the top-end. The NVH levels are very well contained for sane riding as this engine is not tuned for outright performance. The throaty exhaust note is very appealing and the Bajaj V15 sounds the best at low RPMs. 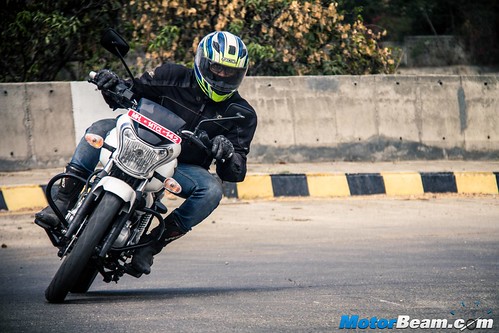 Riding Dynamics – Riding a commuter is never fun, instead it’s something like a comfortable affair with the motorcycle while travelling. The Bajaj V15 is very comfortable and rides like a charm. All the punch is in the mid-range and commuter ergonomics with softly sprung setup makes the bike ride like a beauty. The upright handlebar gives a commanding feel while the soft seat take the rider in like a pillow and the ride is pretty much enjoyable. The best part whilst riding is the throaty exhaust note which is like a melody for the rider. The brakes are powerful and have very less stopping distance even with a combination of front disc and a rear drum. 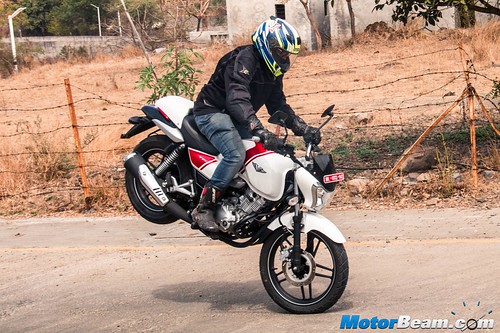 Braking performance is astonishing on the Bajaj V15

The tyres are a set of EuroGrips mounted on a unique alloy size. The front is an 18-inch wheel with 90/90/18 section tyre while the rear is a 16-inch unit with a 120/80/16 tyre. The tyres grip well on-road in both dry and wet conditions yet it gets tricky to handle on loose gravel or sand. Cornering on this motorcycle is easy but leaning in too hard is not advisable. The front is high and rear is low, immediate flicking into corners makes the front loose out immediately. Riding with a pillion isn’t boring either, there’s plenty of grunt to keep moving even on inclined roads. 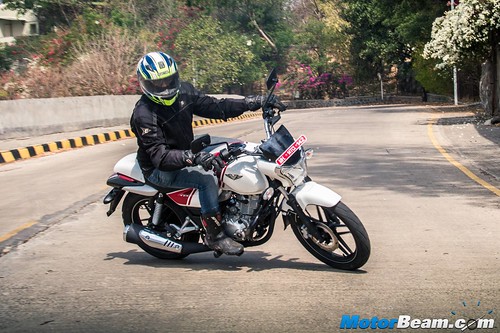 Verdict – The Bajaj V15 is another 150cc motorcycle in the Bajaj Auto line-up. Now if anyone wants a portfolio of 150cc motorcycles to see the types of options available, one can just head to the Bajaj showroom and see the options ready. The new motorcycle is created with an idea of remembering an icon, the INS Vikrant while catering to people looking out for premium commuters. Though the bike appeals a lot, there are a lot of things which didn’t impress us, like the design of the headlamp and the vibes on the motorcycle. But the Bajaj V15 completes its job and serves the purpose accurately. Pricing is decent and this bike could fit the pocket well for anyone looking for a premium commuter. With premium appeal and easy after sales service from Bajaj, there would be quite some V15’s visible on the road in near future. 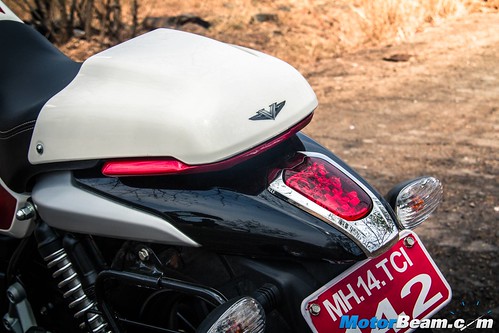 * Front headlamp design does not go with the bike’s character
* Vibrations when revved hard, bike can only do sane riding 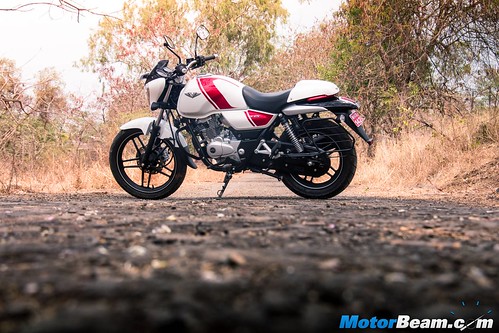 A totally unique motorcycle by Bajaj, the V15 has its own identity 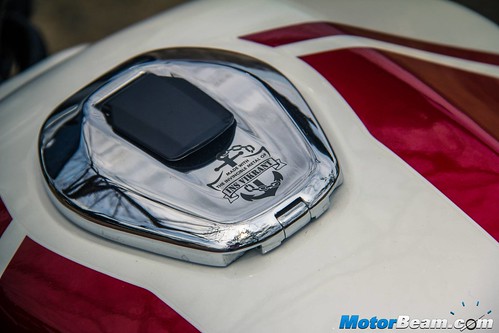 In the memory of INS Vikrant, the warship that served us great

“The Bajaj V15 is a marketing master-stroke and the bike doesn’t disappoint by being tailor made for a commuter rider. It’s not an enthusiastic bike but a patriotic one and performs very well in the hustle bustle of the city. The handling is confidence inspiring at low speeds while cruiser type power delivery makes it quick in town. Being priced right is the big boon for this machine.” – Faisal Khan, Editor, MotorBeam.
“The Bajaj V15 is a unique motorcycle. It enters into the market not as a budget sports motorcycle but as a premium commuter offering. Focused on the masses and hence has an identity to be unique of all. The V15 competes in a different manner but works the way like all the Bajaj bikes do. There are a few bits which are flawed, but the Bajaj V15 is made for a purpose and it justifies it properly.” – Dhanil Vira, Road Tester, MotorBeam.
“Being a 150cc, the V15 isn’t very versatile and is only restricted to a commuter. However, it is evident that this is how Bajaj intended it to be. The bike succeeds in providing a premium feel to the rider which is lacked in other Bajaj bikes. What Bajaj seems to have got right is the branding that it has associated with its product making it something unique in its segment.” – Adwait Babras, Road Tester, MotorBeam. 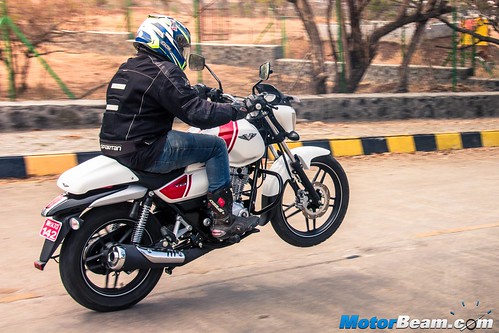 Let it be any bike, one wheel fun is a mandatory thing