At best, the Monster 797 can be termed as a stepping stone to the bona fide Ducati portfolio

Indisputably, the Scrambler and Monster line-up is as important to Ducati as food is to survival. The Italian marque crossed 1000 unit sales milestone in India back in 2016 and these two products, being entry-level Ducatis in a price-sensitive Indian market, have contributed significantly towards that. Ducati introduced the Monster 795 in 2011 to cater to Asian markets such as India. Coming to the topic, what do you replace it with when the time comes? Ideally, a product which improves on most aspects without losing out on the basic DNA. But Ducati, replacing it with the Monster 797 which is less on power as well as torque, thinks otherwise. We find out whether the experience is worth the asking price or not. Read on!

Motor Quest: Ducati Monster 797 is a replacement to the erstwhile Monster 795. In essence, the latter was an Asia-specific approach from the Italian brand created by plonking the 796’s motor on the 696’s frame. In India, the 795 became Ducati’s most affordable product till the Scrambler took over in 2015. The year 2017 marked the Monster 797’s arrival in India. However, the Monster 821 had to go in the wake of BS-4 norms at around the same time. Thus, the 797 gives company to the fire-breathing Monster 1200 duo in India. 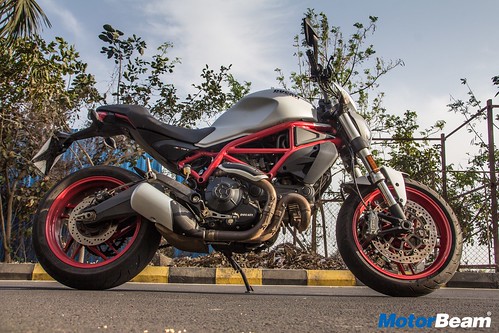 Designed by Miguel Galluzzi, Ducati Monster line completes two and a half decades of production this year

Styling – Ducati terms the 797’s design as “compact” and “sporty”. Well, there couldn’t have been a better choice of words to sum up its attributes. As this one is a naked motorcycle, there is minimal bodywork and the onus rests on mechanical bits to spice up the appeal. At the first glance, the 797 looks magnificent with the stance of a typical Monster, top notch paintwork and commendable fit & finish levels. Together, the muscular tank, oval headlight and sculpted tail section exude originality while those painted 10-spoke alloys and exposed trellis frame help emphasize the energetic character. Subtle details such as the Italian tricolor and fuel tank lock are to be appreciated but the absence of LED blinkers on a million rupee motorcycle is shocking, to say the least! 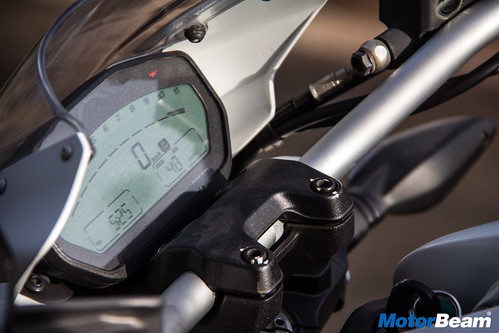 Instrument Cluster and Switchgear – The instrument cluster on the Monster 797 is an all-digital unit which is quite basic in nature. An array of tell-tale lights are crowned above the LCD unit, which itself is home to a digital speedometer, odometer, tachometer, clock and a couple of trip meters. Apart from that, you can view the engine oil temperature and average time and speed for a journey as well. Like other Monsters, this one misses out on one crucial thing and that is the fuel gauge! The rider can toggle between menus via buttons on the left side of the handlebar. The starter button is integrated with the engine kill switch which helps free up some space on the right side of the handlebar, which Ducati has utilised for a hazard light switch. As expected in this segment, switches are of good quality and are effortless to operate. 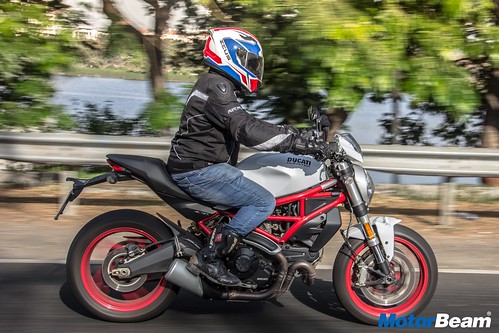 Ergonomics – The Ducati Monster range has been known for its aggressive demeanour. Going by that, one would expect dedicated ergonomics from this one. However, the ergonomic balance of this Ducati is spot-on! Positioning of the saddle, handlebar and footpegs allow the rider to sit in a committed position to exercise more control over the bike. On the brighter side of things, the handlebar is sufficiently wide and grips are positioned such that the posture doesn’t become too harsh on the wrists. The single-piece seat has decent amount of cushioning that makes it comfortable for the rider but the same cannot be said for the pillion as the latter part of the seat tapers upward and becomes narrow. Form over function, definitely! The same philosophy holds true for the rear-view mirrors which don’t offer much of a view either.