Performance – Doing duty astride the Monster 797 is an 803cc, air-cooled, Desmodue twin-cylinder engine that puts out 72.4 BHP of power and 67 Nm of torque. It comes mated to a 6-speed gearbox with a wet multi-plate clutch that makes clutch lever operation a lot more slicker and lighter. As we said earlier, power and torque figures are down, by 13.6 BHP and 11 Nm respectively, as compared to the 795. Expectedly, outright performance isn’t as fierce as you’d expect from a Monster. However, the bike fares well in city riding as there is more than enough power on tap to have fun under triple-digit speeds. That said, the 797 lunges past the 100 km/hr mark in 4.5 seconds and will go on to a top speed of around 210 km/hr if you push it. However, the lack of punch becomes evident as one nears 180 km/hr with the mediocre front end feel further worsening that effect. 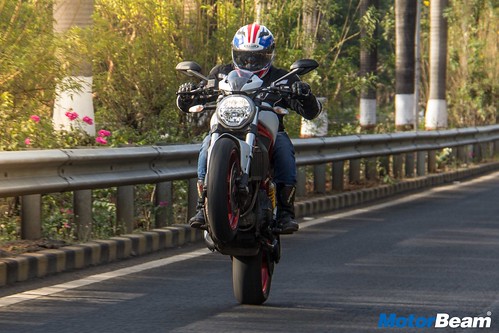 No fancy electronics on offer; have fun the way you please!

Unlike other Monsters, this one is very novice-friendly and can be tamed with ease

There are some vibrations felt on the handlebars, tank and footpegs before the rev-limiter kicks in at 8500 RPM. However, the L-Twin motor is surprisingly smooth lower down accompanied by a throaty exhaust note as you twist the throttle. On full throttle, the revs build up freely translating into a linear power delivery. You won’t have any complaints with the gearbox either as it throws no tantrums even upon aggressive shifting. As such, the Monster 797 isn’t prone to heating but when it does, engine heat is thrown straight at the rider’s feet that makes it difficult to ride in stop-go traffic! Returning close to 19 kms to a litre of fuel, this Ducati can cover 300 kms in one go which is good enough for those weekend getaways. 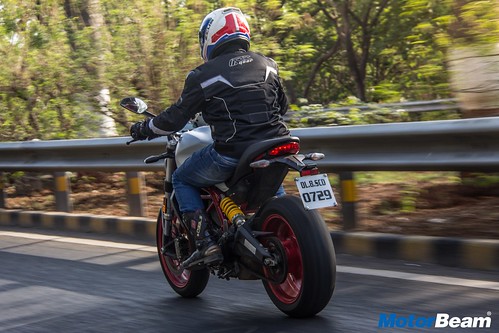 The Monster 797 is way more practical than its name would have you believe!

Riding Dynamics – Suspended via 43 mm Kayaba USD forks up front and Sachs offset monoshock at the rear, the 797 offers a splendid ride quality which makes it well-suited to Indian roads. Minor bumps, undulations and irregularities are absorbed with utmost ease and poise. However, this plushness takes a slight toll on handling as this motorcycle isn’t as surefooted around corners as you’d expect. Similarly, the front end doesn’t weigh up sufficiently at high speeds which calls for a hair-raising experience on the straights. Tipping the scales at 193 kgs, the 797 feels very nimble and agile. Don’t let its incredible flickability fool you though, as this machine isn’t a corner carver and the tyres of choice aren’t the best for this job either. Braking is performed by twin 320 mm discs up front and single 245 mm disc at the rear. The brakes offer amazing stopping power along with a strong initial bite while the adjustable lever has a nice progressive feel.