With the launch of the Xpulse twins, Hero MotoCorp has finally made off-road fun a little more accessible to the masses

Hero MotoCorp introduced an off-road oriented light-weight motorcycle back in 2013. It was then a possibility that a motorcycle that can go anywhere came as a stock option from the company, but then Hero pulled the plug on the bike in early 2017. After a few glimpses of the Xpulse at some national and international motor shows, the company has finally launched the Xpulse 200 and the 200T. I got a chance to experience both the variants around Bangalore and I’ve come back quite impressed.

Motor Quest: Hero MotoCorp discontinued the Impulse in 2016 and the sales stopped in early 2017. However, they showcased a slightly bigger version of it, a concept, at the 2017 EICMA while the following year they showcased not one but two variants of the Xpulse at the 2018 Auto Expo. However, Hero finally launched the Xpulse 200 and 200T along with the Xtreme 200S in May 2019. 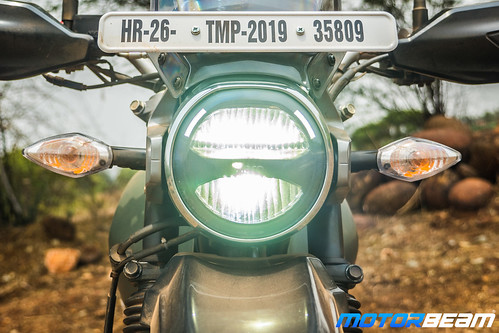 Styling – A quick look at the Xpulse 200T and one can notice that it’s a modified Xtreme 200R which is partially true as they share almost all the hanging parts like tyres, alloys, rear suspension and the swingarm. However, what really makes the Xpulse 200T stand apart is a brand new LED headlight setup, which is a first for the company. Along with that, the tank is bigger and has a calmer design going along with a longer and different seat setup. The front suspension too is a different unit which makes it stand apart. The Xpulse also gets an LED tail light and had a different yet purposeful grabrail too. While the Xpulse 200T is available in four colours, the 200 is available in 5 colour options. 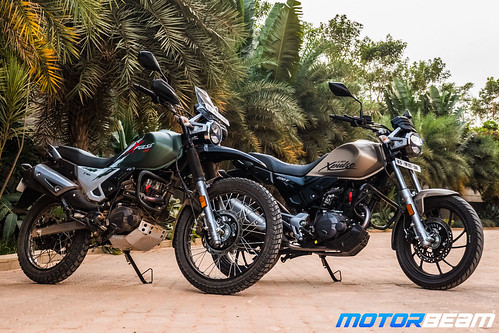 The difference in looks says all about the purpose

The Xpulse 200 has all the elements from the 200T but adds some more which are off-road oriented and purposeful. Starting from the front, the 200 gets a high-raised mudguard, knuckle guards on the handlebar and a tiny windscreen. The front suspension is covered with gutters while the wheels are spoked with off-road rubber in a 21-18 setup. The 200 gets a metal bash plate while the same on the 200T is of hard plastic. To complete the look, the 200 also gets an upswept exhaust making it look very purposeful. 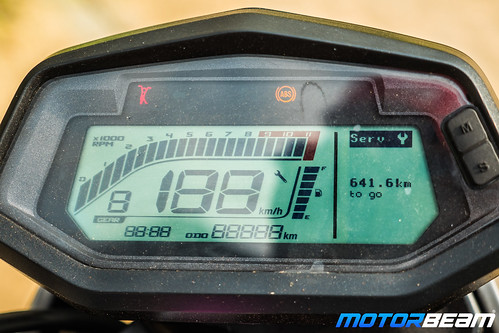 A first from Hero, the digital console has a service reminder too

Instrument Cluster and Switchgear – For the first time ever, Hero has got a fully digital instrument cluster in place. The unit is slightly small but has a lot of information on offer. Split into two sections, the left side of the console displays the tachometer, speedometer, fuel gauge, odometer and a clock. We have also got a gear position indicator this time around. On the right side, the section is switchable which displays ECO mode, trip details for both the trips and also navigation information. The console connects to the phone via Bluetooth and an app as it shows all the information. The switchgear quality is decent and doesn’t feel tacky.

Hero XPulse To Be Powered By Xtreme 200R Engine