When you consider a hatchback, there are quite a few options available in the Indian market today. Every hatchback (except the ones from Honda) comes equipped with a diesel engine. Still there are many people out there, who need a petrol hatchback due to their limited running and budget. Two of the most modern petrol small cars are undoubtedly the Honda Brio and Chevrolet Beat. Both cars are powered by 1.2-litre petrol engines and both look very trendy. However which one should you put your money on? Time to do a head-on comparison between the Honda Brio and Chevrolet Beat to find out which hatchback is better. 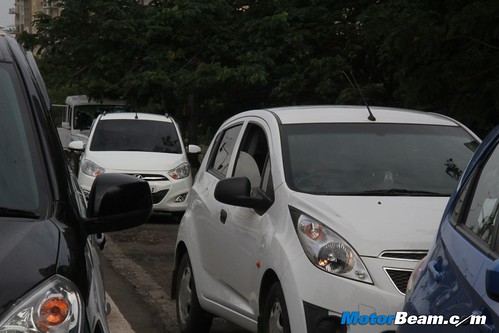 We could have easily included the Hyundai i10 and Maruti Suzuki Ritz in this comparo but both cars lack the funky quotient possessed by the Honda Brio and Chevrolet Beat. 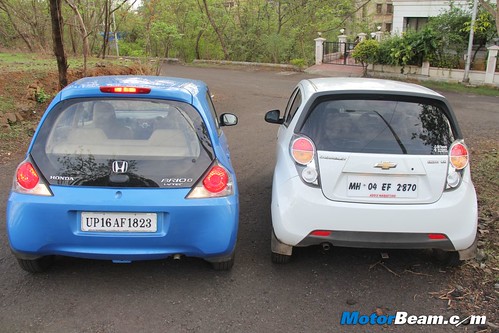 Exteriors – Both the Honda Brio and Chevrolet Beat look very funky and dare I say it, cute. The Beat features a big front grille, unique rear door handles and silver roof rails. The Brio has been designed with aerodynamics in mind and features sharp lines. The rear is the most striking part with the all glass boot-lid. Both these cars have almost similar dimensions with the Brio wider of the two and the Beat slightly longer and taller. These cars will attract the youth to a great extent and it is difficult to decide on either, based on the looks alone. 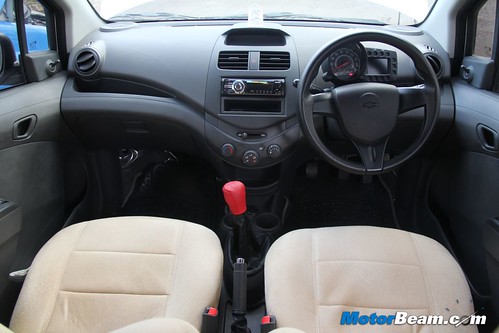 Interiors – The interiors of the Chevrolet Beat are more sporty than the Brio. The car features a motorcycle inspired cluster, where the tachometer is digital. However the driver’s left leg will foul with the center console due to the curvy design of the dashboard. The rear seat is quite good but the dark shades don’t give the passengers a good perception of space. The rear windows are small and placed higher, which will result in claustrophobic feeling for rear passengers on long drives. Built quality is not great and the quality of plastics leave a lot to be desired from. 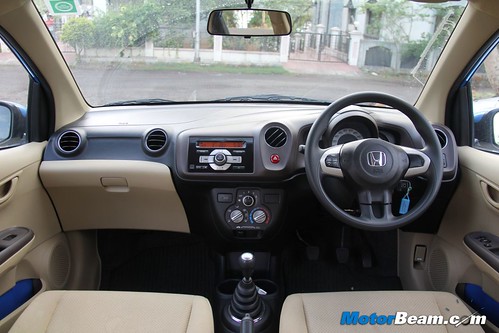 The Honda Brio features brown and beige interiors, which are much better in quality than the Chevrolet Beat. The Brio has more legroom and knee room than the Beat but the Chevy has better head room. The drivers leg doesn’t foul with the center console in the Brio and cost cutting is not evident on the inside. The beige treatment on the lower half of the dashboard, seats and doors give the Brio a very airy feeling. The Chevrolet Beat has a marginally smaller boot at 170-litres, against the Brio’s 175-litres. However the loading bay on the Honda is quite higher (thanks to the glass made tail gate). Thus the Beat’s boot is the more practical of the two. 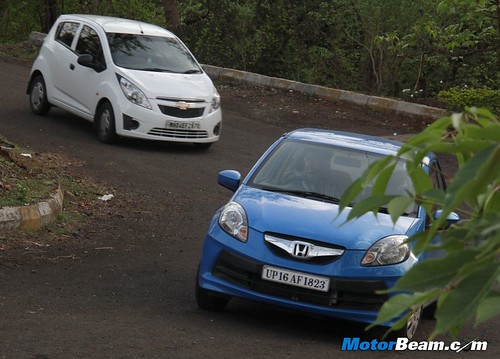 Ride, Handling and Braking – The Chevrolet Beat has a softer suspension than the Honda Brio. The Beat uses a compound link type suspension, while the Brio uses a torsion beam axel. The softer suspension on the Beat leads to a much better ride quality than the Brio. The Beat absorbs the bumps while the Brio’s suspension feels a bit stiff. However the Beat’s handling is just about average and the car doesn’t feel sure footed through the twisties. There is slight amount of body roll too. The Honda Brio feels very agile and handles brilliantly. The Brio features wider tyres (175 mm), while the Beat has really puny rubber (155 mm). This helps the Brio to remain glued to the road even at high speeds. While the Chevrolet Beat is not as stable at high speeds, it does have a better steering. Honda uses an electric power steering but GM use a hydraulic unit which offers better feedback. 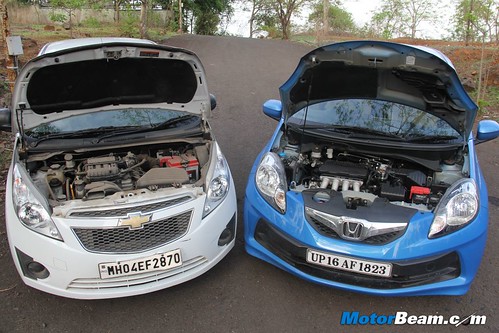 Performance – Neither of these cars are hot hatches but both produce roughly similar amount of output from their 1.2-litre engines. The Honda Brio weighs around 40 kgs lesser which further boosts its power to weight ratio. GM is not known for tarmac scorching engines and that is something which doesn’t change with the Chevrolet Beat either. The car produces 80 BHP of power at 6400 RPM and 108 Nm of torque at 4400 RPM. All this SMARTECH technology doesn’t help one bit and performance is just about average. While there is enough pep for city driving, the Beat’s petrol motor hates the redline and feels really rough at the upper end of the power band. 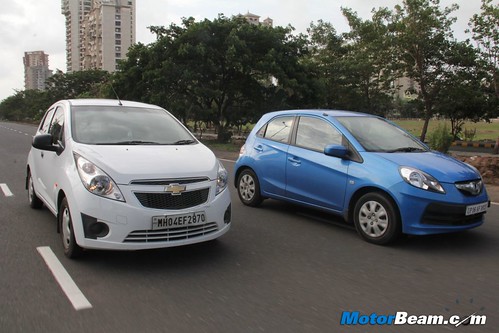 The Chevrolet Beat takes 15 seconds to reach 100 km/h, while the Honda Brio will nudge past 100 km/h in 13 seconds. That is a whole two seconds faster. This is thanks to the fantastic 1.2-litre i-VTEC engine which produces 88 BHP of peak power at 6000 RPM and 109 Nm of peak torque at 4600 RPM. The Brio’s motor is very refined and loves high revvs. It doesn’t feel stressed out at any speed. The Brio and Beat have a similar top speed of 155 km/h but the Brio will get there first. Both cars feature a 5-speed manual transmission and the Beat’s notchy gearbox is no match for the smooth shifting unit in the Brio. Brakes of the Brio are much better too and the Beat’s thin tyres are to blame for the average braking performance. 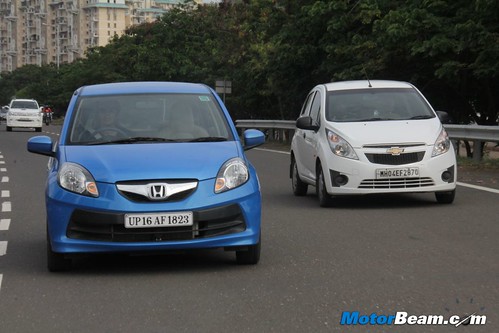 Fuel Efficiency and Pricing – Both cars will return almost similar mileage, that is 13 km/l in the city and 16 km/l on the highway. The Brio might return 5% more mileage owing to its better engine. The Beat is available in LPG and diesel options as well but Honda is only offering a petrol option on the Brio. The Chevrolet Beat range starts at Rs. 4.44 lakhs for the base PS petrol, while the top end Beat LT with option pack is priced at Rs. 5.87 lakhs. The Honda Brio range starts at Rs. 4.80 lakhs for the base E variant, while the top end V variant is priced at Rs. 6.27 lakhs (all prices on-road, Mumbai). 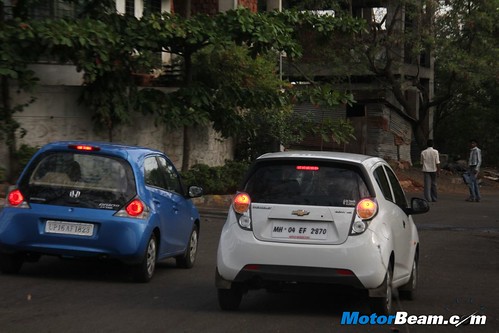 Conclusion – Although both cars are very similar in terms of their design approach and engines, they offer very different things to the buyer. The Chevrolet Beat rides better and offers much more at a cheaper price (rear wiper, defogger and climate control). However the Honda Brio is faster, more fun to drive, better built and will retain its value much better than the Chevrolet Beat. Thus the Brio is our pick and the additional amount to purchase the Honda is well worth it. After all, the Brio does love you back!