These bikes are the most expensive 2-valve 150cc machines available today.

Let the battle commence! Yamaha and Honda are arch rivals around the globe. In India, it is all about volumes. Yamaha has targeted the youth and the premium segment with the well-established FZ and Fazer, which are scaled down versions of higher capacity motorcycles. The 150cc avatars of these twins were an instant hit. Honda does not want to be left behind. Honda has recently launched the CB Trigger, which also takes cues from its elder siblings. The CB Dazzler performed poorly primarily because of its design and other minor essentials which come associated with Honda were missing on the motorcycle. Honda has upped the game by a very good margin now. We compare these two head to head to find out who scores high. 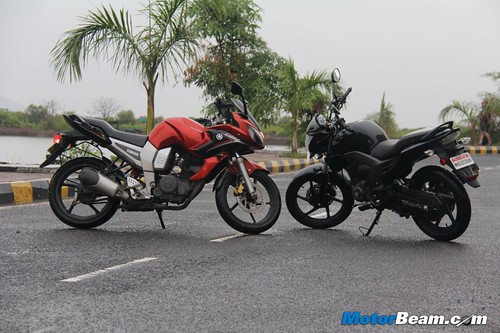 Styling – The Yamaha Fazer shouts sportiness from every single angle when you look at it. Everything is beefy too. The suspension, chassis, fat rear tyre and the huge sculpted tank appeal to the masses at the first sight. At the front, the twin headlights enclosed in half-horizontal fairing gives the feel of a much more substantial motorcycle. Folks even call it the plastic RE because of this macho styling. The rear with the basic stop light and indicators lets it down a bit. The Honda CB Trigger on the other hand is contemporary. The motorcycle also has the sporty stance to compete. The muscular tank is similar to the Fazer, but a tad smaller. The sleek rear tailpiece, fat matte black exhaust, chunky led tail lights and the relatively fatter rear tyre (but nowhere near as the Fazer), appeals to a sensible buyer. The front on the other hand is not exciting at all. 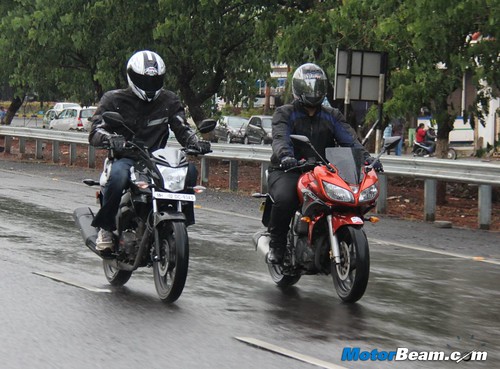 Ergonomics – The flat handlebars and the upright sitting position makes the Fazer comfortable and the Yamaha executes sportiness, which one wants from a Yamaha motorcycle, very well. The rear view mirrors mounted on the Fazer give a larger picture of what is behind and seat cushioning is good for the rider, but not for the pillion. The new Fazer has wider seats, but it still is not as comfortable as the one on the Trigger. This is where the Trigger scores. The Honda has a comfortable upright commuter-ish riding position with seat width and cushioning being much more comfortable for the rider and the pillion. The foot pegs on both bikes are set for a comfortable ride but the one on Fazer are rear set, while on the Trigger they are front set. 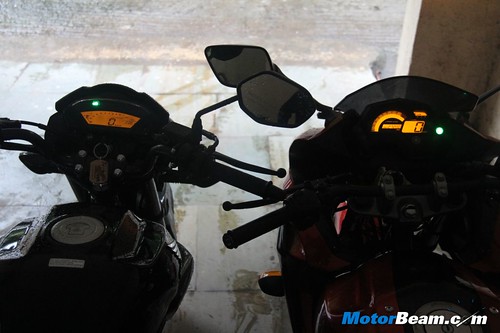 Instrument Cluster and Switch Gear – Let us define the common factors first. Both the Honda CB Trigger and Yamaha Fazer have full digital speedo and tachometers. Both are small in size. However, the Trigger has a slight edge here when it comes to offering features. The Trigger comes with two trip meters and a clock while the Fazer make does with engine check light when it comes to offering something different. The switchgear round goes to Yamaha. It is truly ahead with conventional switchgear with each control in the right place and excellent quality. The Fazer comes with an engine kill switch as well. The CB Trigger loses this round with decade old switchgear and misses out on the engine kill switch which is only seen on the CBR250R when it comes to the Indian line-up of Honda motorcycles. 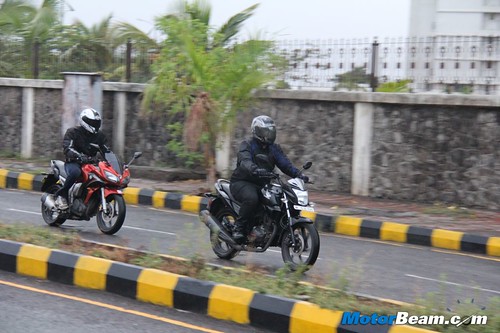 Performance – A 153cc engine powers the Yamaha Fazer while the Honda CB Trigger has a 149.5cc engine. Displacement hungry motorcyclists have been notified. The Fazer and Trigger both produce 14 BHP, but the Fazer produces it a full 1000 RPM earlier at 7500 RPM than the Trigger. The Fazer produces 13.6 Nm of torque at 6000 RPM while the Honda produces 12.5 Nm of torque at 6500 RPM. The Trigger weighs 137 kgs while the Fazer weighs 142 kgs. On the road, these figures turn out to be different. The Fazer is ahead until 65 km/hr due to shorter gearing, after which the Honda, with its taller gearing and lower kerb weight starts pulling ahead and gets past to reach a top whack of 115 km/hr mark (speedo indicated). The Fazer struggles after 95 km/hr to reach its top speed while the CB Trigger stays ahead until the end effortlessly. 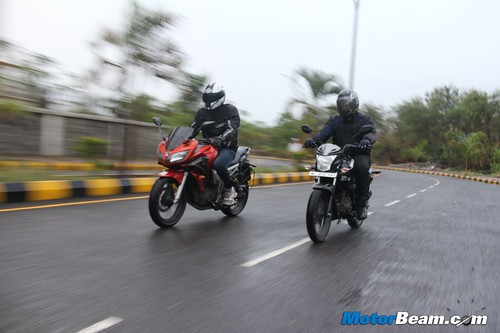 When it comes to practicality and reliability, both are suitable enough. Both these motorcycles have smooth and refined engines. With a sporty soundtrack, the Fazer scores high, while the throaty CB Trigger is also music to the ears. The Fazer with its shorter gearing and instantly accessible torque, is easier to drive in the city. The Trigger on the other hand also keeps up with the Fazer easily, no doubt about that. The Trigger is much peppier and extremely satisfying to drive. In terms of fuel efficiency, the CB Trigger is blindly ahead. The Trigger returned 44 km/l in the city and 52 km/l on the highway. The Fazer being Yamaha, rounded up figures very well. The Fazer returned 40 km/l in the city and 47 km/l on the highway. All these figures were a result of driving spiritedly. 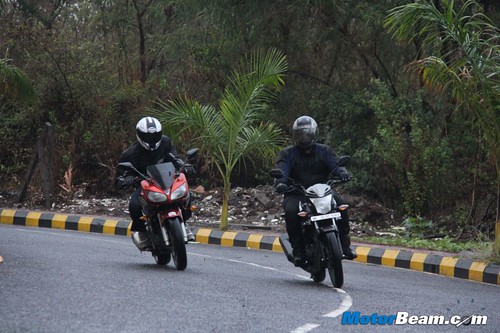 Riding Dynamics – The Yamaha Fazer and the Honda CB Trigger both come with diamond chassis but on the dimensions front, the CB Trigger with its compact dimensions, shorter wheelbase, lower seat height and front set foot pegs is quite engaging to ride. Throw the motorcycle into a corner, and it shows how precise, agile and nimble it is. The grip from the tyres and composure from the chassis is not as confidence inspiring as the one on the Fazer. It is not that the CB Trigger is not what a Honda is supposed to be. Here, Yamaha, with the Fazer and its superlative chassis gives you the confidence to dive into corners. With fast entry speeds and the exits being even faster, thanks to immense grip from fat, soft compound tyres, stiff yet subtle suspension setup and the well setup front fork geometry, puts a huge grin your face. 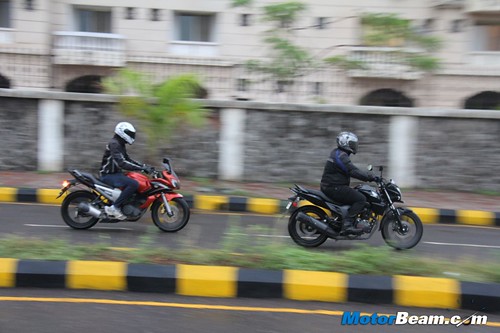 Moreover, at the same time you wished the Yamaha Fazer had more horses as the chassis easily depicts that it can handle twice than the current tune. Braking on both the motorcycles is good, but the Trigger with dual disc with CBS scores high and stopping distance is very quick and reassuring with front and rear brakes being applied at the same time for balanced and safe braking. The large disc at the front on the Fazer with large two piston calipers is excellent and rear drum brakes are bit spongy and obviously less powerful than the disc brake equipped CB Trigger. 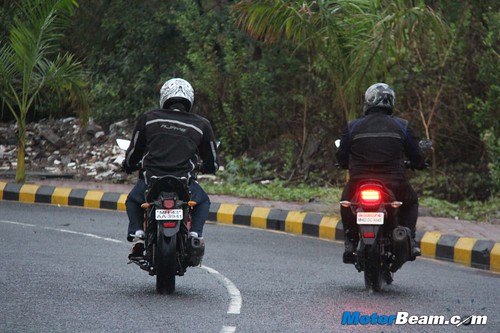 Verdict – Yamaha proves it again that it makes the best motorcycles for keen riders out there. With a minor compromise on practicality, it is the best out there. However, all that comes with a big price tag too. The equally fantastic and practical Honda CB Trigger with CBS retails at Rs. 90,000/- (on road Mumbai) that is bang on against the Fazer, hence the comparison. Nevertheless, if you consider the CB Trigger with dual disc without CBS, it is against the naked brother, the FZ at a similar price tag of Rs. 82,000/-. Therefore, it turns out that the CB Trigger is the value for money bike here. Now the big picture is, with more goodies on offer that comes as standard with the CB Trigger, makes it a salivating proposition for the masses. However if you want a more substantial looking motorcycle with brilliant chassis balance, the Yamaha Fazer is easily the choice for the enthusiast.

The Yamaha Fazer has a slight edge in terms of appeal and dynamics but the Honda CB Trigger is more value for money.