Streetfighter naked motorcycles are lightweight maniacs suitable for everyone

KTM kickstarted the affordable performance motorcycle segment in India with their Duke series. The KTM Duke 200 came as a proper competitor to the Honda CBR250R but the CBR was faster and more reliable. KTM later introduced the Duke 390 at the price tag of the CBR250R and the 390 produced a lot more power compared to the fully-faired Honda. Honda recently launched the CB300R which should compete with the KTM Duke 250 but with a hefty price tag it actually competes with the Duke 390!

Motor Quest: Since 2011, Honda had the CBR250R which was almost 2 lakh rupees. In 2013, KTM launched Duke 390 at the same price range which made more sense in terms of performance. Honda did not introduce any other bike as a challenger for the Duke 390 until 2019 where it launched the CB300R. 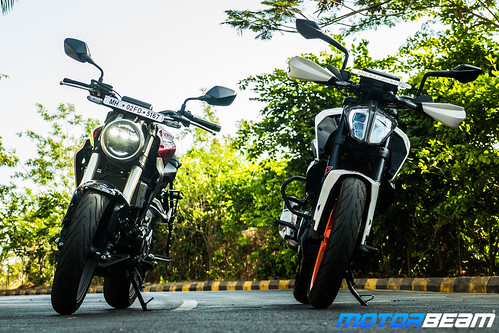 Styling – ﻿The KTM Duke 390 was first launched in 2013. Major styling changes were made in the year 2017, where it got LED headlamps, aggressive body panels, different tank design and different tail design. This resulted in the bike looking more like a younger version of the Super Duke! KTM did introduce a special white colour later but the design language stayed the same. The BS6 Duke 390 is already out in the market now but the major change for the 390 is only the new colour scheme and the addition of a quick-shifter. Here we have the sharp, edgy and aggressive designed BS4 Duke 390 being compared with the subtle, smooth and retro BS4 Honda CB300R. The Duke has a lot of graphics and colours while the CB300R has simple contrasting colours matching the minimal number of body panels. 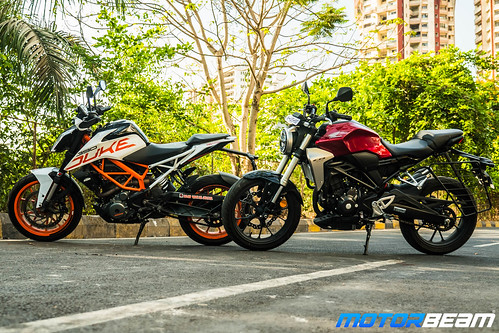 Headlights, tail lights and indicators are LEDs on both these motorcycles

To boost the sales, companies these days try to replicate their litre-class bike designs into the smaller segments. So is the case for the CB300R too. It has clean & simple lines with a modern retro design and blacked-out engine. The retro circular headlamp design with LED setup looks beautiful even in the daylight. The Honda does look very proportionate to its cycle parts and yet it is quite small in dimensions. The colour scheme on the CB300R looks very subtle while the Duke just shouts orange all over. The styling and design cues on the Duke 390 are very millennial and aggressive while that on the Honda are mature and retro with a modern touch.

News highlights of the day include Hyundai, Mercedes, Toyota and Volkswagen. Hyundai Kona - Prices of the Hyundai Kona have been increased by   END_OF_DOCUMENT_TOKEN_TO_BE_REPLACED

A person in Rajasthan has modified his Premier 118NE to look like a Rolls-Royce Phantom Drophead. Catch All The Latest Videos, Subscribe To   END_OF_DOCUMENT_TOKEN_TO_BE_REPLACED

The upcoming Benelli 600RR has been spied in production-ready form. Benelli had discontinued the Tornado 1130 in 2014 and quit the sports bike   END_OF_DOCUMENT_TOKEN_TO_BE_REPLACED