The F-Type Coupe just blitz past everything, both in the straights and around corners

Even if you are living under a rock, you will be quite aware that Tata Motors’ owned Jaguar is on a roll. The car which has made them the talk of the town in this decade is without a doubt the F-Type. The long awaited successor of the fantastic E-Type, the F-Type has lived up to its hype and the British automaker followed the success with the launch of the F-Type Coupe. While convertibles are loved the world over, Coupes too have a fan following for multiple reasons, one of them being sharper handling. The top-of-the-line F-Type Coupe is the R version which is one ferocious cat. We put it through the paces in and around Mumbai and are still reeling under the rush this sporty Jag gave us.

Motor Quest: The F-Type has been a long time coming and under Ford ownership was almost going to be launched in the 1990s. The current F-Type was launched last year while the Coupe went on sale earlier this year. 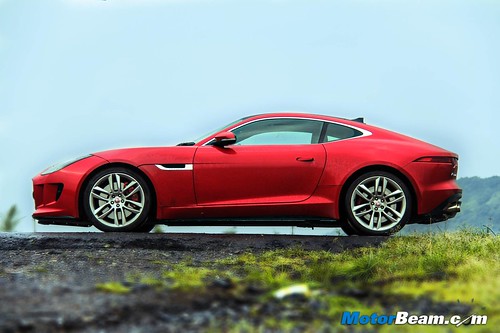 Exteriors – The F-Type Coupe looks very fast while being very still, such is the emotion it projects with its appealing and jaw-dropping design. A long hood, a neat sloping roof, big wheels and a tail with gorgeous lights is enough to make everyone forget what they are up to, just so that they can have a glimpse of this car. The F-Type’s visual appeal is undeniable, so much so that people start stalking you just to get a better look at the car. Case in point, we had to cancel our photo shoot twice as crowds would gather with their phone cameras out in a jiffy. This car oozes pure eye candy and in that red shade, it is impossible to miss it anywhere. 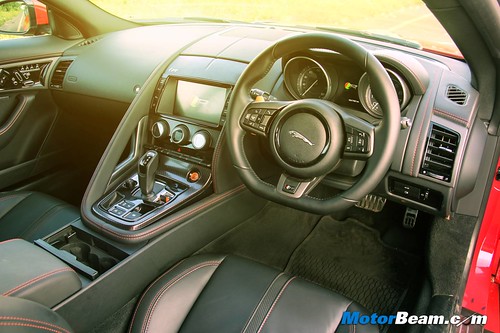 Sporty yet luxurious, Jaguar has given the F-Type’s cabin a good blend of both

Interiors – The interior of the F-Type Coupe has been carried over from the Convertible model so there are a lot of similarities. Inducing a sense of occasion are the pop-out door handles which are your touch points to get inside the neatly laid yet sporty cabin. Dab the Ignis orange coloured engine start button and voila, the centre AC vents rise up. A chunky 3-spoke steering wheel with a plethora of buttons is at the helm while the centre console has aircraft inspired switches for that feeling of flight when you get going at full pelt. The 8-inch infotainment touch screen is easy to use but could have been slicker, it does have a lot of info including a G-force meter, stopwatch to time your laps, acceleration/brake graph, multiple cameras and the super cool ambient lightning with the option of 5 colours. 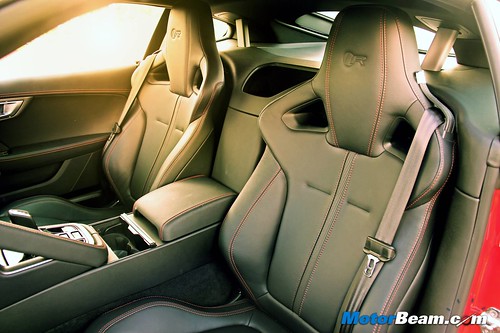 In spite of the F-Type being a sport car, it blends its go-fast character with luxury very well because once inside the cabin, you are as comfortable as you would be in a 7-star hotel. There is also a panoramic sunroof and although it doesn’t give the same airy feel as the open-top model, there is still a feeling of space. The seats are just overly comfortable, they hug you like nothing else and the controls on the doors let you get that perfect position too, adjusting the seat in 14 ways. Some storage bits are present in the cabin but there isn’t much place to keep stuff, including the boot which although bigger on the Coupe (no roof to keep in the trunk), there is a spare wheel which occupies most of the usable part. Practicality aside, the F-Type’s cabin impresses with its design, quality of materials and feeling of luxury, all of which is achieved in very good proportions. 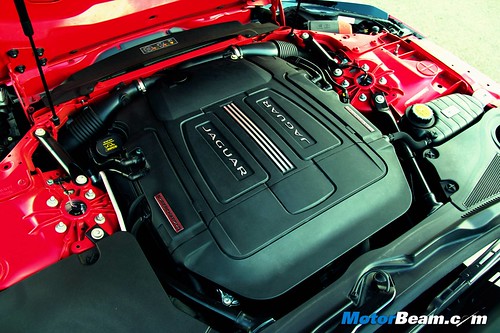 Performance – The Jaguar F-Type is a fast car, whether it’s the V8 or even the V6 for that matter. While the convertible version of the F-Type already has a massive 500 PS of power on tap, the Coupe R has been given more thrust thanks to an increase in output. This cat now leaps with insane urgency thanks to the 5.0-litre force-fed motor now shooting out 550 PS and 680 Nm. That’s a lot of horses and what really amplifies the driving experience is the sound. Start the car and the roar from the quad pipes is enough to wake an entire town. Give the F-Type the beans and the exhaust sounds as ferocious as a lion ready to prey. 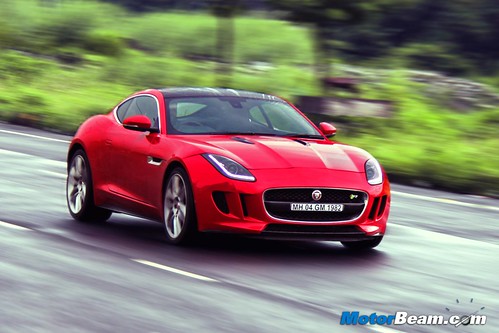 The F-Type gets the option of Active Exhaust, which with the press of a button on the centre console further boosts the dB levels from the power packed 8-cylinder mill. Jaguar has tuned the exhaust so perfectly that they deserve a big applaud for it, the F-Type is one sweet sounding car, one which makes you addicted to its brawny muscle car like symphony. Going fast isn’t the only good part because when you lift off, the way the exhaust cracks and pops is just something else, it’s pure nirvana. With so much power on tap, the F-Type is off in a jiffy and before you know it, the double ton is breached and still the locomotive like pull is constant and almost unending. 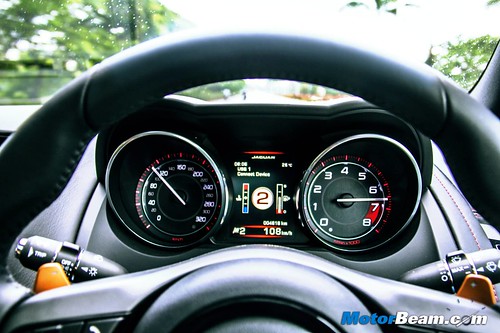 The gearbox is super quick with shifts, there is no hesitation with cog swapping

What really impresses is the fact that there is no flat spot in the power delivery, the F-Type is just ready for action right from the word go. So be it low speed driving or high speed cruising, the Coupe R is always ready to prowl. There is good low-end pep so ambling around town isn’t an issue at all with the exhaust also being quite muted for what is a big beast under the long belly. However, give it the beans and you are greeted by a long surge, a strong pull and blurry scenery. Top-end thrust is fantastic too but redline comes in a bit early at just under 7000 RPM. It takes 4.2 seconds to do the 0-100 km/hr sprint with the ton coming up in second gear. Accelerate hard and you are pushed back in the seats, the Jag leaping ahead with utmost urgency. 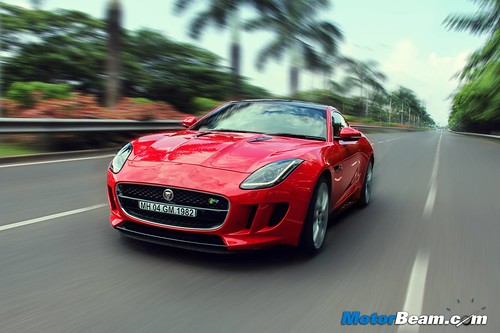 One can simply buy the F-Type for its soundtrack alone, it just sounds epic

You don’t have to be in the mood for fun and games always as the F-Type makes for a good car to cruise in style. The motor is relaxed when you drive sedately and that enables you to munch miles without punching other vehicles out of sight. Cruising in top gear at 100 km/hr results in the engine spinning at just 1300 RPM. The 8-speed gearbox is a gem, it upshifts instantly (you can use paddles too which fall right at your fingers), finds the right gear almost always and works with a level of secrecy which only people in the military do. With a mileage of 4-5 km/l, the tank range isn’t much as Jaguar has reduced the capacity by 2-litres on the Coupe. 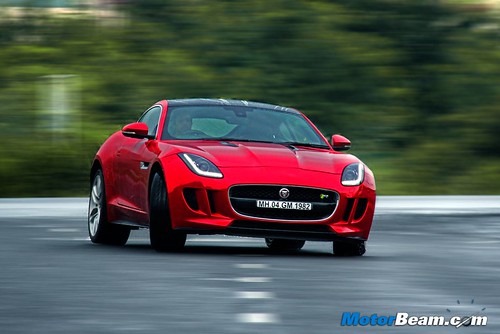 Sharp around corners, the Coupe is 80% stiffer than the Convertible

Driving Dynamics – The F-Type Coupe is 80% stiffer than the Convertible and that shows the instant you drive the car. The stiff suspension is immediately felt with the ride quality being quite harsh on bad roads. Still the F-Type has a decent ride quality for a car which has no business in clambering over pothole ridden Mumbai roads. Handling is sharp, the F-Type loves to corner hard and inspires the confidence for you to push even harder, the hydraulic steering being quick and feedback rich too. There is a Dynamic Mode which further improves things including stiffening the suspension, quickening gear shifts and summing the engine to unleash all those 550 race bred horses. 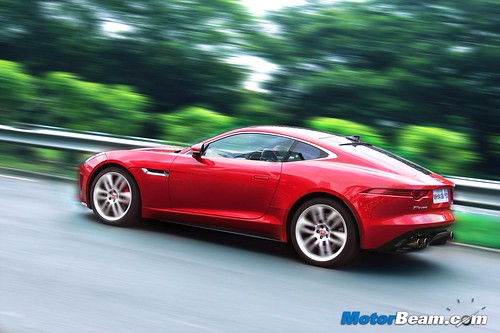 There are a slew of systems (torque vectoring, LSD, etc) ensuring the F-Type is always pointing in the direction you want it to but in spite of that, this rear-wheel drive car is still quite tail happy. Understeer is well prevented but oversteer is easy to get. Turning off the traction control system is a guaranteed recipe for going the opposite way but even with the system on, a slightly aggressive turn can result in the tail stepping out. High speed stability is excellent and an active rear spoiler deploys at 120 km/hr, retracting and disappearing out of sight at 90 km/hr, one can also manually engage it. With so much performance on offer, braking needs to be excellent and this British sports car doesn’t disappoint, it has ample stopping power. 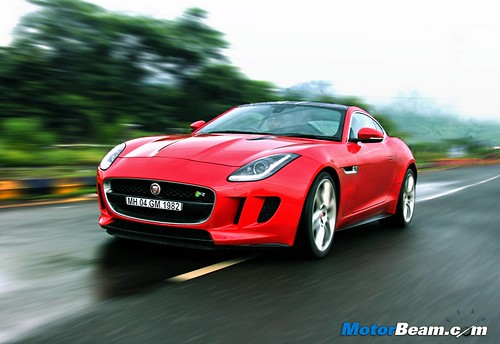 Being a global model sold in all big markets, safety is very good

Safety and After Sales Service – The Jaguar F-Type is a global model and has been tested thoroughly, it’s got good crash test ratings and performs extremely well when it comes to safety. Jaguar is expanding its service reach in India which give them one of the best distribution network among supercar companies. Thus sales and service isn’t an issue although just like all other supercars, spare parts aren’t likely to be available off the shelf. 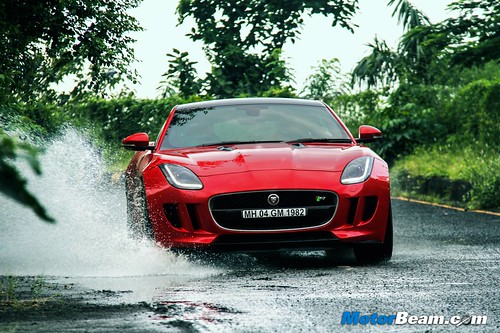 This car really touches your heart and makes you want one, it’s so desirable

Verdict – When we drove the Jaguar F-Type last year in Spain, we were bowled over and the Coupe takes things further ahead. With the same ingredients of fast, sexy and fun, the F-Type in its closed roof avatar is even faster, more appealing to look at and even more fun. The big plus of the coupe is that it handles much better too thanks to the stiffer body. All this translates into a car which makes you feel extremely special yet connected, quick but surefooted and needless to say, like all other Jaguars, this one too stands out vividly on the road and boy it does it in style with a loud and addictive snarl.

The F-Type Coupe is even more fun and although performance was never a doubt with this sports car, in the Coupe R version, Jaguar has taken the madness a step higher and that’s simply the thing to love. 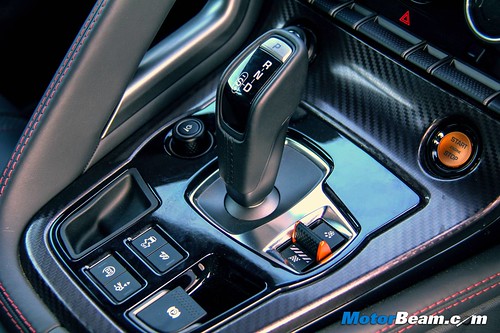 One of the best consoles we have seen, those buttons transform the experience 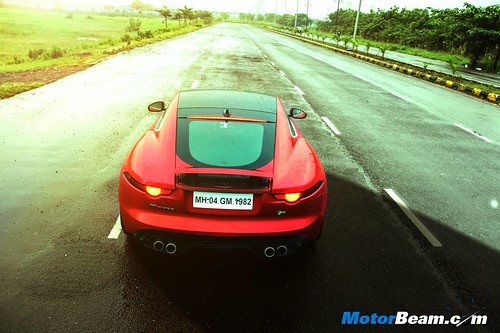 Jaguar F-Type Convertible Review
A Day With A Supercar

Jaguar To Launch F-Type In India On 8th July