The Mahindra Thar hates tar and we all know that. However, the Thar has proved to be a good lifestyle vehicle and a second car for people who like to have adventurous trips and do a lot of off-roading. But, Mahindra has been known to create modified versions of its vehicles and we first saw that with the Bolero Stinger series introduced many years back. Now, the automaker has developed a customised Thar and named it the Thar Daybreak, which is touted to have modifications to the tune of almost Rs. 10 lakhs! So what does the Daybreak get? Let us find out.

Motor Quest: The Thar was launched by Mahindra in a bid to attract those customers who want a lifestyle SUV and want to do off-roading too but don’t have the time, patience and resources to look for an old Jeep and restore it. The Thar has got good response from buyers and the Daybreak is an attempt to increase the appeal of the car. 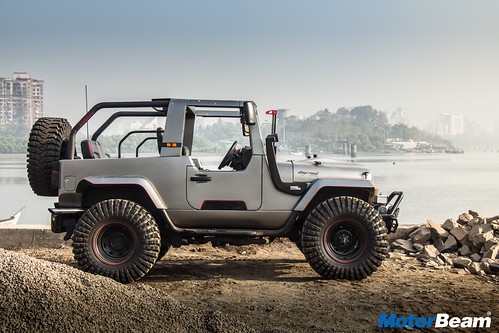 Exteriors – The overall stance of the regular Thar remains but Mahindra has done some really extensive modifications to the outside of the Daybreak. The first thing to grab anyone’s attention would be the HUGE 37-inch Maxxis Trepador tyres which look really chunky. The fifth wheel is mounted at the rear and it looks so big that it almost hides the rear of the car! Also, you get a matte grey paint job which looks cool. Along with that, some other bits include projector headlamps with LED DRL rings and a blacked out grille. 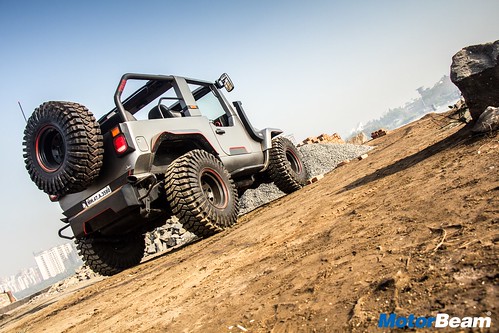 The Thar gets revisions to body panels and metal bumpers too

You also get new metal bumpers at the front and rear. Mahindra has also added a snorkel but it is more of a novelty. On the left side, you get a lift jack for the car while Mahindra has also installed dual chrome exhausts. A scooped bonnet is another cosmetic tweak along with modified doors, raised fenders and beefed up wheel arches. You also get a soft roof with the car, while a hard roof is optional. Our test car came topless though!