It is a very competitive market out there for compact sedans because this segment is crowded with offerings from Maruti Suzuki, Honda, Hyundai, Ford, Tata Motors and Volkswagen. It is the Maruti Dzire that has always reigned this segment and the third generation that was launched last year boosted the sales significantly. Honda has now launched the second generation Amaze and we pit it directly against the segment leader to find out whether it can match up to the segment leader’s benchmarks.

Motor Quest: Compact sedans are so popular in India because they offer a 3-box design, lots of features, decent space and efficiency at the price of a premium hatchback and knowing how much Indians love sedans, it is no surprise that this segment is one of the most sought after in our market. 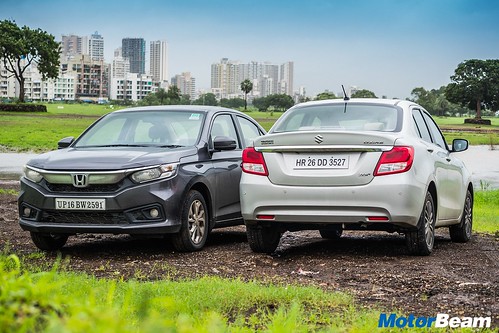 The Amaze looks catchy while the Dzire is curvy

Exteriors – With both the cars receiving a design update throughout the length, the cars no more look disproportionate. You can almost look at them as bigger cars that have been shortened to fit into their sub 4-metre length. Taking cues from the Honda City, the Amaze now gets a bigger chrome panel at the front which also houses the Honda logo. The front and rear bumpers have also been redesigned to suit the car. At the rear, the C-shaped tail lights also look good. The bigger 15-inch wheels also add to the stance of the car. A spoiler is provided on the boot for that sporty feel and a shark-fin antenna is borrowed from the Honda City. 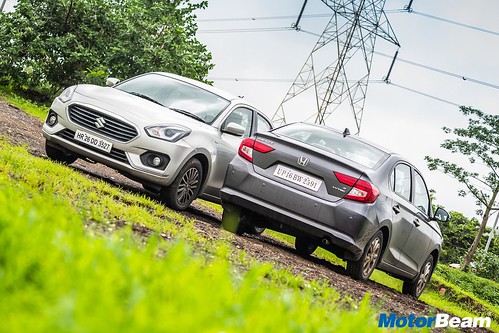 Both these compact sedans look better than their previous generations

While the Amaze gets a sharp design, the Maruti Dzire is curvier looking. The swept-back headlights which also house the projector lamps are a much needed change from the last generation Dzire. It looks mature and the 15-inch diamond-cut alloys go amazingly well with the car. The ORVMs now get turn indicators in them. The rear isn’t as happening as the front but does well to merge with the overall design. 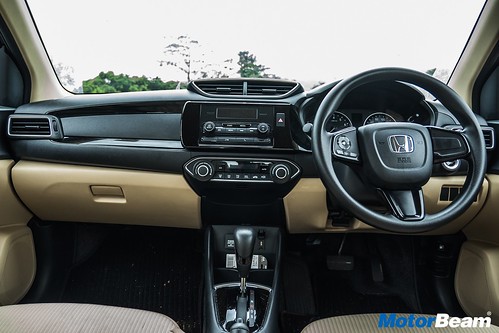 The cabin of the Amaze is much better built than before

Interiors – Both the cars have a neat layout for the cabin and both of them are feature loaded. Honda and Maruti are offering a black and beige layout for the cabin. Some features that are common to both the cars include a 7-inch infotainment system with Apple CarPlay, Android Auto, push button start, keyless go, automatic climate control. Some features that the Dzire gets over the Amaze include LED DRLs & projectors and rear AC vents while the Amaze gets cruise control and paddle shifters (only on petrol) which the Dzire misses out on. The new infotainment system on the Amaze is very good compared to the older car but Maruti’s SmartPlay system is also excellent and the reverse camera has a very crisp display. 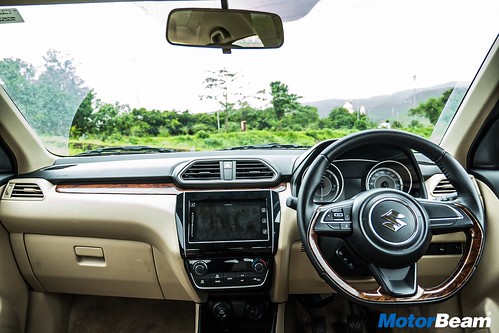 Scoring good on practicality, both the cars get a good number of storage spaces inside the cabin and all 4 doors of both the sedans can hold 1-litre bottles too. Talking about space, the Amaze is a bit more spacious than the Dzire and even the boot on the Honda is bigger at 420-litres compared to the 378-litres capacity offered in the Maruti. The Dzire’s seats are wide enough for large passengers but the cushioning is on the flatter side while the seats on the Amaze get thicker cushioning with better support and bolstering. At the rear, knee room is good enough in both cars but in the Dzire the head room feels a bit less compared to the Amaze.