The F3 800 commands a slight price premium over the Brutale 800 and it’s completely worth it!

My first ever stint with MV Agusta was in 2016 when I swung a leg over the F4R. Italian motorcycles, besides their aesthetic brilliance, are so mean-spirited and communicative that other machines find it really hard to replicate such ride experience. Though not a sale model, that one had the maddening genes of the base F4 with a sleeve of hardware borrowed from the F4RR. Fast forward to now, Faisal and me had another Italian day out with entry-level scorchers from MV Agusta – the Brutale 800 and the F3 800. Born up catching glimpses of the latter on the covers of my books, it was a no-brainer for me to grab the keys of the sweet F3 800. The second superbike of the year, and the first one for me to review, had to be unique! While many refer to it as the baby F4, the F3 800 is for sure not a baby in the way it performs, handles and behaves.

Motor Quest: In simple words, MV Agusta F3 800 is a more powerful version of the F3 675 which was showcased at EICMA 2010. The 675 entered into production a couple of years later while the F3 800 joined in 2013. India launch of MV Agusta motorcycles materialised in 2016 through their partnership with Kinetic. With the inception of BS-4 emission norms, the F3 800 was taken off the market for a spell and relaunched shortly after as a more polished piece of machinery. 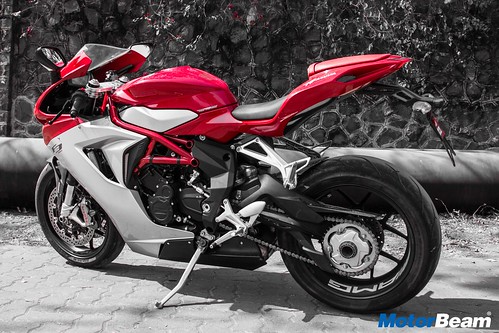 Styling – The F3 800 is an absolute eye-candy on our roads and doesn’t have to work hard to grab eyeballs, more so in the Red and Ago Silver shade our test bike came dipped in. Similarities with the fire-breathing F4 are so prominent that a regular joe won’t be able to differentiate between the two at first. However, an enthusiast worth his salt will easily be able to notice the missing DRLs and revised exhaust pipe placement on the F3. The fairing is inspired from the F4 whereas the tail section resembles that of the Brutale 800. That being said, every single design element on the bike blends together in harmony and there is no quirkiness caused by this amalgamation. Attention to detail is of high order which is evident in the minimalist branding this bike gets along with clever accentuation of mechanical bits such as the single-sided swingarm, Brembo brakes and slashed three-pipe exhaust. Leave aside the footpeg mounts, even the side stand on this one is a work of art! 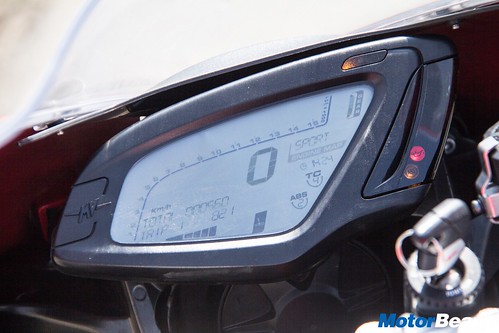 The Brutale 800’s symmetrical instrument cluster would have looked much better here!

Instrument Cluster and Switchgear – The instrument cluster on the F3 800 consists of an all-digital display that, akin to most products from the brand’s stable, adopts a skewed outline. Apart from a shift light on top and numerous tell-tale lights stacked one atop the other, this console puts out a good amount of data from basics such as the speedometer, tachometer and time to elaborate information such as gear position, best as well as current lap times and the selected engine map. The console misses out on a fuel counter though. All information is presented neatly and is fairly readable. However, there is a lot of glare under direct sunlight that makes it difficult to comprehend data. Switchgear quality is good and one can toggle between different menus on the display through buttons on the left side of the handlebar whereas the other side holds the starter, kill switch and engine map controls. 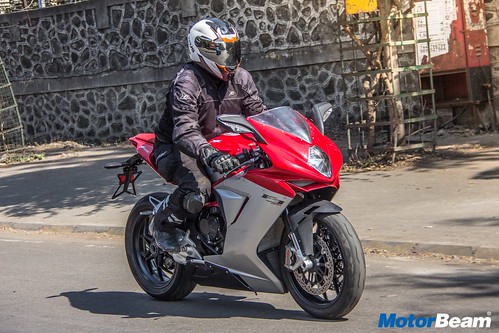 Ergonomics – First up, the F3 800 measures 2060 mm x 725 mm (length x width) in outer dimensions and weighs 173 kgs dry. These two attributes make it compact, nimble and controllable – pretty much like the KTM RC range of the quarter-litre segment. Through its aggressive riding position, the F3 promises the experience of a litre-class in spite of not being one. The low-set clip-ons and rear-set footpegs, coupled with a saddle height of 805 mm, result in a leaned-in posture typical of a supersport. On the positive side, overall ergonomics are definitely more bearable than MV’s F4 range. Given enough time on the saddle, one can get used to the dedicated ergonomics rather quickly. The seats, though seem to be well-cushioned, aren’t very comfortable or spacious for the rider as well as the pillion. Thanks to the aerodynamic fairing and sizeable visor, windblast is very well-contained even at high speeds.