Another day, another Pulsar, another shootout. In spite of all this, we are still amused because some battles last forever, like the Pulsar vs Karizma fight isn’t new but something we have been hearing for the past 12 years. New Pulsars keep coming and oddly though, the Karizma also is being updated more frequently than earlier. What makes this interesting is the sibling rivalry because in today’s shootout, we will be considering both the versions of the Karizma, the R and the ZMR, meanwhile the Pulsar comes to this battleground in twins too, the proven 220 and the recent most motorcycle from Bajaj Auto to go on sale, the AS 200.

Motor Quest: The Pulsar 220 is the oldest bike here as it was launched in 2009 while the Karizma twins got an update in 2014. The hotly baked product is the Pulsar AS 200 but it is essentially a Pulsar 200 NS underneath, the latter was launched in 2012. 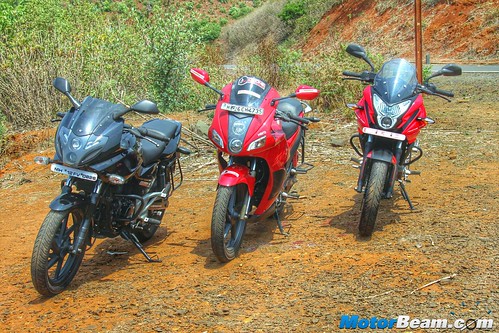 Styling – There is no denying the fact that the Pulsar twins look better than the Karizma twins. While the ZMR is the only full faired bike here, the rest of the motorcycles are semi-faired, the Pulsar 220 being the oldest in design. The Karizmas were refreshed not that long ago while the Pulsar AS 200 is the freshest machine here, it is essentially the Pulsar 200 NS with a few changes but to us, it not only looks the best bike here, but is also the most attractive Pulsar on sale currently. 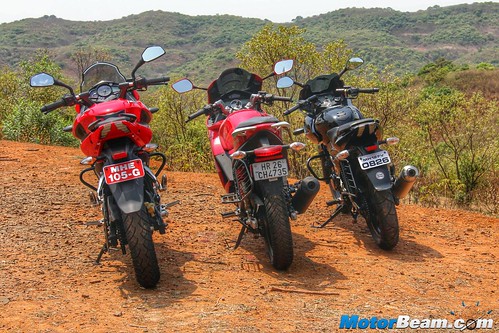 The rear of the Karizma is quite odd, Pulsars carry the typical rear-end

What works for the Pulsar AS 200 is its well proportioned body, muscular elements, underbelly exhaust and adventure stance. The Pulsar 220 is also a good looking bike but has aged, albeit gracefully. Meanwhile, the Karizma twins come across lacking any sort of proportion, the design being bulky and lacking any sort of harmony. The ZMR does have a nice fairing design but the front and rear-end just don’t match and no matter how long you look at these Hero bikes, they simply don’t grow on you.

Instrument Cluster and Switchgear – The Pulsars use an analogue digital instrument cluster while the Karizma R uses an analogue layout for both the speedometer and tachometer with a digital display and the ZMR gets an all digital layout. The cluster on the Karizma R is highly dated while the one on the ZMR is quite loaded, even showing a welcome message and real time fuel consumption, which is missing on the Pulsars. All bikes get a clock except the Pulsar 220 while the Hero offerings miss out on an engine kill switch. The Pulsar AS 200 has the most readable instrument cluster and also has a service due reminder, it also has the best switchgear in terms of quality, the Pulsars getting backlit switches. 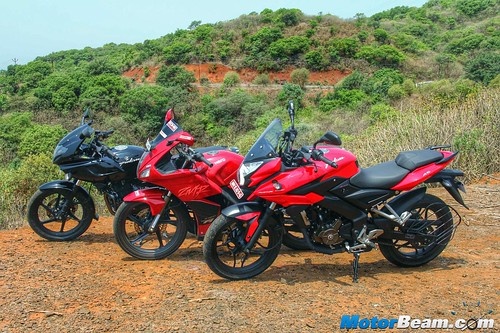 The Pulsars offer slightly better ergonomics than the Hero Karizmas

Ergonomics – The Karizmas have been known to offer excellent comfort but in their latest avatar, that is no longer the case. The attempt at making the Karizma twins sporty has resulted in the R and ZMR having a slightly lean forward riding position. The Karizma siblings aren’t uncomfortable but they aren’t as comfortable as the Pulsars which offer a more upright riding position, the Pulsar 220 being better than the Pulsar AS 200 in both rider and pillion comfort. The Pulsar 220 and Karizma R have the same 795 mm seat height while the ZMR has 1 mm higher and the AS 200 is more suited to tall riders with its 807 mm saddle height. 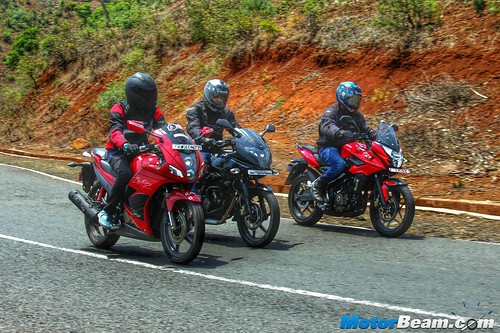 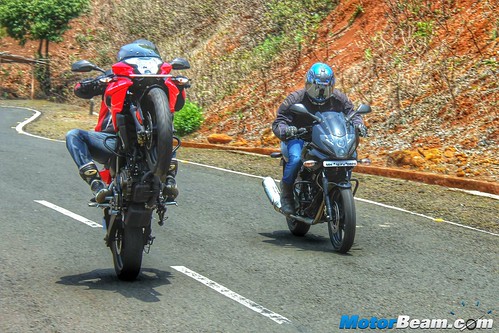 The AS 200 has much superior performance than the 220, it’s much quicker

So when you ride all these bikes back to back, you do realise that all of them are far from impressive when it comes to NVH, as there are quite a lot of vibes in the top-end. The Karizma ZMR has the smoothest idle, courtesy of the FI but gets thrashy as you pull near to its rather low 8500 RPM rev limit. Same is the case with the Karizma R too and surprisingly the Pulsars manage to not only be quicker but also boast of better refinement than the Honda powered machines. The Pulsar 200 AS is the fastest bike here, doing the ton in 10.5 seconds, compared to the 11.20 seconds by the Pulsar 220, 11.26 seconds taken by the Karizma ZMR and the Karizma R being the slowest of the pack at 11.59 seconds. 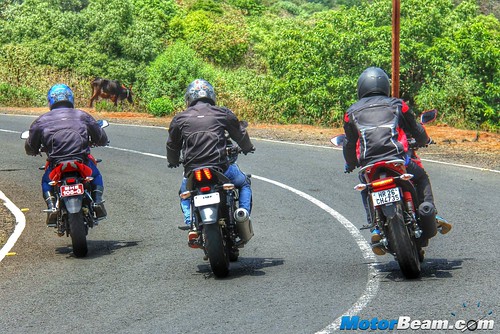 The Pulsar AS 200 has the most enjoyable redline, it also has the higher rev limit

The Pulsar AS 200 impresses the most in every aspect of performance and that’s because its engine is the newest here while the other powertrains are very old. The Adventure Sport Pulsar is the fastest in top speed, recording 136 km/hr on the VBOX against its second place finishing sibling which manages a real top whack of 134 km/hr. The difference between top speed of both the Pulsars isn’t much but the 220 takes much longer to get to its top speed. Meanwhile the Karizma ZMR and R top out at 130 km/hr and 126 km/hr respectively. 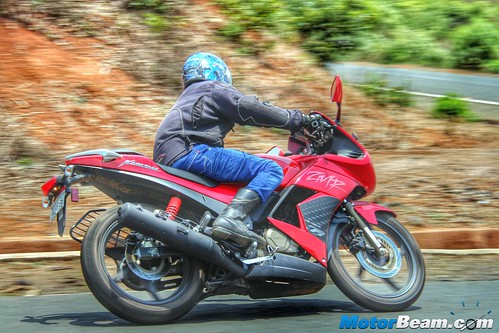 The Karizmas have good city performance but the Pulsars offer the most joy on the highways. All bikes come paired to a 5-speed gearbox, except the Pulsar AS 200 which uses a 6-speed unit, the transmission and clutch action being the best on the fresh new Pulsar. The Pulsar 220 and Karizma R get a 15-litre fuel tank while the Karizma ZMR has a 15.3-litre tank and the Pulsar AS 200 has a smaller tank of 12-litres. There isn’t much to differentiate between the mileage of these bikes and all of them will return between 35 to 40 km/l, the AS 200 being slightly more frugal than the rest. 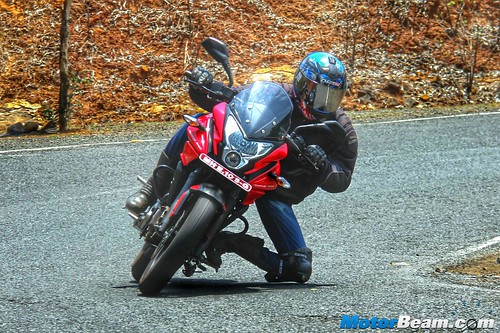 The Pulsar AS 200 has the best handling here, its perimeter frame being super

Riding Dynamics – The Karizmas have a softer suspension set-up and so does the Pulsar 220, thus these bikes excel in ride quality. The Pulsar AS 200 is more stiffly sprung and although ride quality is good, it isn’t as good as the others here. The Pulsar AS 200’s superior hardware does reflect on the road. While the other three bikes use a cradle frame, the AS 200 uses a perimeter frame, it also uses a monoshock while others get a twin-shock set-up. That’s not all, the Pulsar AS 200 also has the widest tyres while the Karizmas have the narrowest. 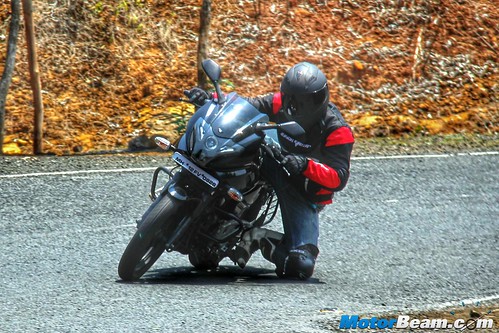 The AS 200 excels in handling & stability, lack of MRF tyres a bummer

Weight distribution on the Pulsar AS 200 is the best which coupled with its excellent hardware makes it the best handling bike here. The 200 AS also has the least windblast thanks to a big windscreen visor while high speed stability is better than the rest. The only chink in the impressive dynamic package of the Pulsar AS 200 are the TVS EuroGrip tyres which don’t offer as good grip as the MRFs which are offered on the other motorcycles in this shootout. The AS 200 uses petal discs and has the best brakes here. 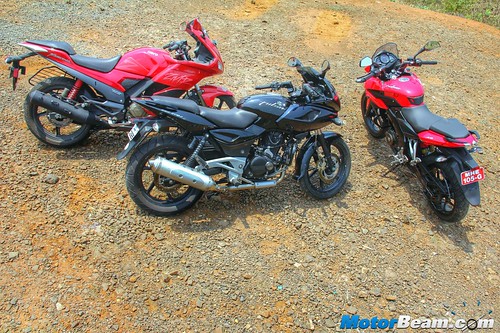 The Pulsar AS 200 easily outshines its rivals, it is by far the best motorcycle here

Verdict – This is yet another Pulsar vs Karizma battle, something we have been seeing since the year 2003. The Karizma ZMR is the most expensive here while the Pulsar 220 and Karizma R are similarly priced, being the cheapest in this four way battle. The Pulsar AS 200 is priced right in between but is the freshest bike of this lot with the most superior hardware. Crucially though, the Pulsar AS 200’s hardware does reflect in the way it rides, it is the quickest of this lot, has the most equipment and offers the best handling too. The Adventure Sport Pulsar is the most fun to ride and feels like a modern machine which the other motorcycles simply don’t. It easily trumps over its own sibling and also over the Karizma twins in this shootout.

The Karizma R, Karizma ZMR and Pulsar 220 were great products five years back but today the game has changed and Bajaj has been at the forefront of the same. The Pulsar AS 200 is a much superior motorcycle in many ways and makes its rivals look very dated in comparison. 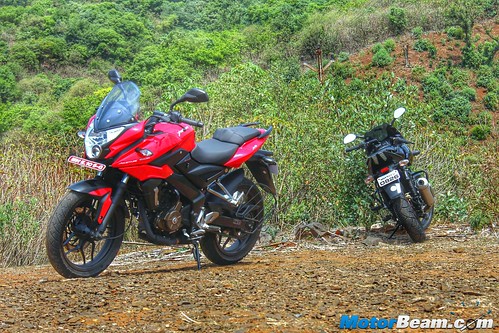 “The Pulsar AS 200 is just so much more bike for the money, it’s hard to even look at the others in this shootout. With such a giant leap in the second generation Pulsar, buying the old 220 makes little sense to me. Being a one time Karizma owner, it saddens me to see what has become of the brand. When I owned the bike, the brand Karizma stood for respect, although it was slower than the Pulsars at that time too.” – Faisal Khan, Editor, MotorBeam.
“I would pick the Pulsars ahead of the Karizmas, any day. Among the two Pulsars, the AS 200 feels much better to ride and is surefooted around corners where the 220 feels a bit hairy. The Adventure Sport is also more comfortable, making it long distance friendly.” – Hrishi Mandke, Pro Stunter.
“The 200 AS and 220 are both good bikes but I felt more confident on the latter while cornering. I guess that is because of the tyres. The 220 does feel very dated now while the Karimzas aren’t bad at all. The ZMR has a sweet engine, it’s punchy, refined and has the typical Honda character which is very good” – Viraj David, Road Tester, MotorBeam.

Pulsar AS 150 & AS 200 Discontinued But AS Series To Comeback

Completely Reworked Pulsar AS 200 In The Works