Last year Motoroyale by Kinetic went on a classic multi-brand spree. They had the brand MV Agusta with them but got onboard with SWM, Norton, FB Mondial and Hyosung as well. So now under one roof, you could get all kinds of motorcycles. We had ridden a few MV Agustas and now it was time to get on with a fun one. The SWM Superdual T, a supermoto motorcycle which is based on the Husqvarna TE610 was our pick. It is an unknown brand for the Indian market so just to summarise, the Motor Quest section should get you all the necessary details. Now, let’s get on with what actually this fun-to-go Superdual can do, shall we?

Motor Quest: SWM is an Italian manufacturer which used to make Trial and Enduro bikes from 125cc to 500cc. They started off in 1971 and had a good line-up of motorcycles which used to participate in Enduro and Trial championships. Currently, SWM is backed by a Chinese company while they keep producing motorcycles out of Italy. The line-up is now widespread across 125cc to 600cc, while we get only the Superdual T in India. 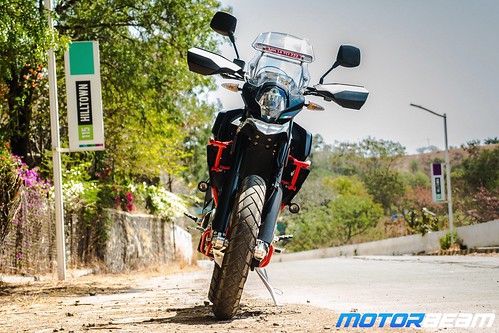 The Superdual is sleek, very sleek!

Styling – With a quick look one would say the Superdual has motocross traits all over it and it’s true. The design speaks the language of a motocross bike but if you look at the Superdual properly, it has additions which make it a supermoto-tourer combo. Bits like the extended fender at the front, high raised handlebar with knuckle guards, spoke wheels and long travel suspension, they just speak of adventure. But some parts like the extended seat, 18-litre fuel tank, a windscreen visor and multiple crash guards with a bash plate talk about touring. This motorcycle looks very attractive and resembles nothing like the other motorcycles sold in India. 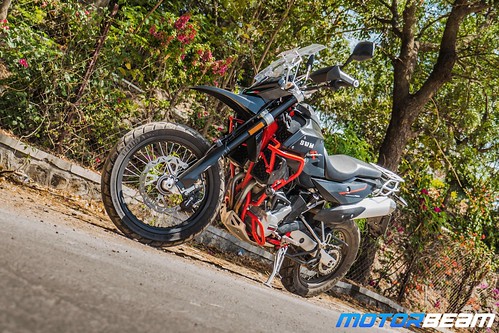 With a lot of exposed bits, it still looks rugged and purposeful

There are no LEDs in the indicators or the headlight but you do get an LED taillight and a pair of tiny LED fog lamps. It gets a floating petal disc at the front and a normal disc at the rear. Although it is a single-cylinder motorcycle, it gets two pipes heading out of the engine head which turn out to be brilliant looking twin under-seat exhausts. The motorcycle stands quite tall and sleek while the colour scheme looks good too. This is something that a KTM adventure would look like and probably the inspirations are coming from a similar source (i.e. Enduro). 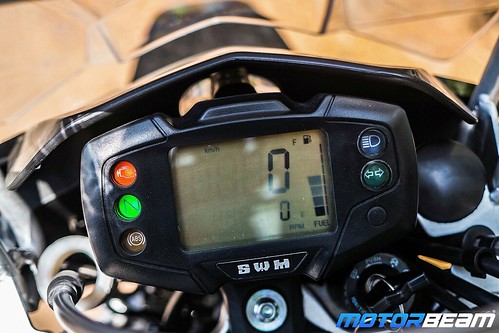 Very basic instrument cluster, doesn’t show much information at once

Instrument Cluster and Switchgear – The Superdual gets a completely digital instrument cluster but the information on the display is very limited. The LCD display reads out the speedometer and fuel gauge as standard while one can switch between the other details with a toggle button. Other details include a tachometer, odometer and twin trip meters. One can also switch between kilometres to miles by playing around with the toggle. However, the screen is too small and one wouldn’t be able to read the exact details. The switchgear quality is just about adequate and the switches seem quite regular. But in addition, you get a switchable ABS button and an additional on-off switch for the LED fog lights.