Tata Motors were the first to come up with a sub-4 metre compact sedan concept in India with the Indigo CS. The tax saving three box design became the new trend soon after. Now, the Indian automaker has decided to break the mundane with a new Styleback design. Their latest offering Tigor is a booted version of the Tiago that comes with drastic changes over the hatch. We explore the new changes on the outskirts of Delhi NCR.

Motor Quest: Tata Motors were the first to offer a sub-4 metre sedan. They have a total of three sub-4 metre sedans including the Zest and the upcoming Tigor. All these three compact sedans are aimed towards different set of audience. 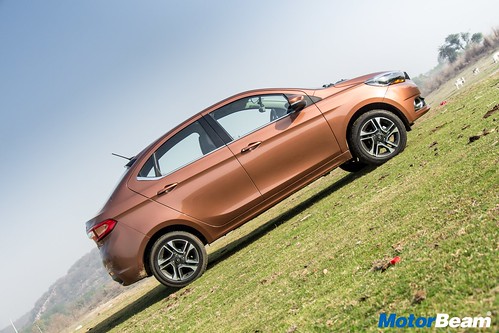 Exteriors – The front profile of the Tata Tigor looks very similar to the Tiago apart from the new smoked out headlights with projector units and slightly revised grille up front. From the side you would notice new chrome highlights on the window line and shiny new 15-inch alloy wheels that look very appealing. Sadly the 15-inch alloys will be only offered with the petrol version while the diesel version will get 14-inch alloys with different pattern. The silhouette of the Tigor when viewed from the side is very coupe-esque that looks very well done. 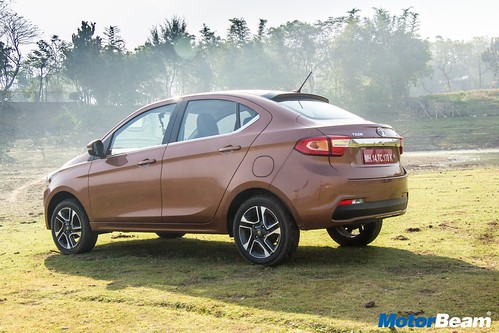 The Tigor look attractive from the rear with the Styleback design

Tata has mastered the integration and the styling of the boot for a sub-4 metre sedan. The steeply raked rear windscreen merges seamlessly with the boot and doesn’t look abrupt from any angle. There is a high mounted LED stop lamp with roof integrated spoiler. The LED tail light units look very cool in the dark while the chrome strip on the boot and sporty rear bumper adds to the visual appeal. The styling of the Tigor attracts quite a lot of eye balls out on the road.