After a regular day at work, I was about to leave for home that day, when a call from our ace bike-editor, Dhanil Vira came. He led me to write this review of the Tron-X One cycle. The cycle had come inside a box and was assembled by a company technician in front of me. It took about forty-five minutes to complete the setup and get it running. I rode the bike home that day and we ended up riding it for nearly 2 weeks. I have to admit that after the first ride, I became pretty sceptical about it but the Tron-X One did well to change my thoughts. Read on to know why.

Motor Quest: The Tron-X One bicycle has come to India to capture the growing electric cycle market. The company has invested in Volta Motors that has a history of producing electric road bikes. The Tron-X One is, in fact, a rebadged Volta Zap which had been showcased in 2017. Volta Motors is now a Smartron owned subsidiary called the Tron-X Motors. The company is looking to bring Voltas’s experience in building electric cycles along with Smartron’s IoT prowess to the buyers in a modern package. 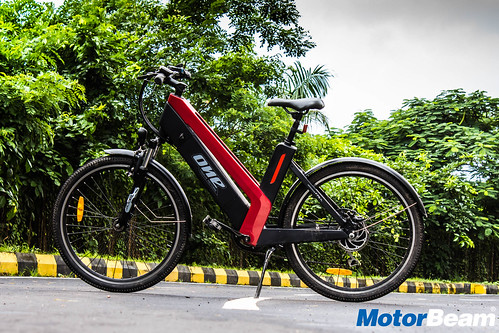 Styling – The Tron-X One, if seen from dead front or rear won’t look any different from a regular cycle. The flat handlebar and the skinny spoke wheels are deceptive as once you start moving towards the side profile of the cycle, you realise there’s more to it. The thick, chunky looking dual-tone (red and black on MotorBeam’s test cycle) centre-body of the cycle really makes it stand out. 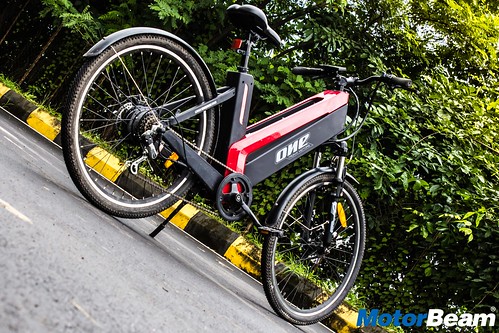 An LED light is provided at the front and is switched on/off by long pressing the ‘+’ button on the cluster. It is pretty small and will only be of some use in pitch dark conditions. The rear gets a basic reflector. The cycle has an overall understated, sharp and neat design. It looks contemporary yet modern. 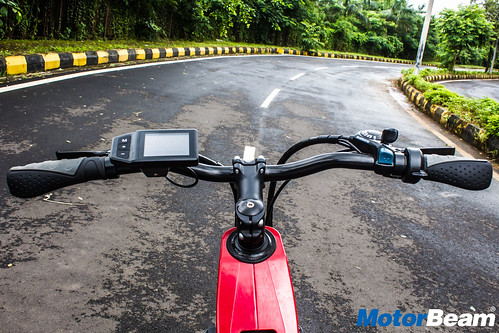 Instrument Cluster and Switchgear– Yes, the Tron-X One has an instrument cluster on it. It is basically a digital display placed on the left-hand side of the handle. The software is well designed and easy to understand. The default screen on the display shows the speed, calories burnt, time-elapsed, power mode (more on that later) and the odometer. The second screen, which is accessed by pressing the ‘M’ button on the cluster shows you the overall readings that you have clocked since the time you bought the cycle. It even shows the number of trips the cycle has made. 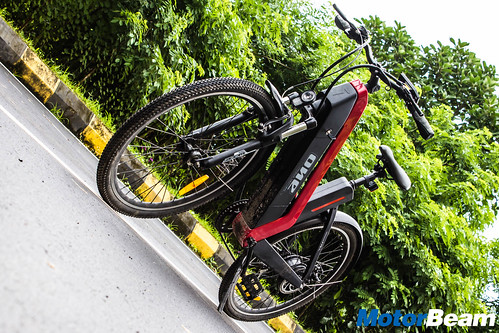 An interesting thing about it is that it can be connected to your phone via Bluetooth. The phone, however, needs the ‘tbike’ application to connect to it. Once connected, I was able to see all the readings on my phone itself which made it easy to keep a track of the bike and my fitness goals (just kidding). The connectivity part is something I personally haven’t seen in too many cycles but Tron-X specialises in the concept of IoT (internet of things) and the company has done well in providing this feature. Be careful about exposing the display to water as it doesn’t have any certified water resistance.