Personally I never go for in-depth details on the 150cc range of motorcycles. No matter how much you pump them to transform into a platter of dish, all that a buyer wants from it is to know how much economy does the thing deliver. And how big hole on the pocket does the maintenance brings in. If these two things jives with the saving account then the consumer buys it else sees the next option. But every once in a while ‘The One’ takes birth and no matter which segment it belongs to, the One tends to grab all the attention it can get. The Yamaha FZ-S is ‘The One’; and as being professional at MotorBeam, we shall squeeze the juice out of this Yamaha, regardless of how big or small the mere cc is. 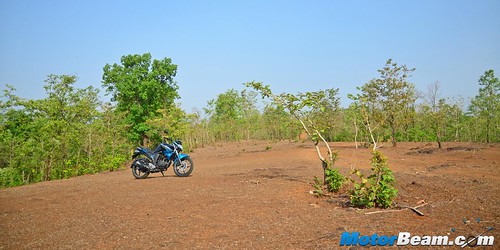 Our long termer was taken to all kinds of roads, including mild off-roads

My approach to take a bike for long term review is slightly different over the standard format. When I was training at Nehru Institute of Mountaineering, my instructors use to make us do rigorous drills. We were dragged to our breaking point and released just before the redlining moment. I wanted to use the same method on this FZ-S. To understand how good or not the bike is in some departments, I took some of the features close to their breaking point before putting down my verdict. At the end of the day, it’s a machine. It’s an advantage to know where the redline blows off and not just on the tachometer. 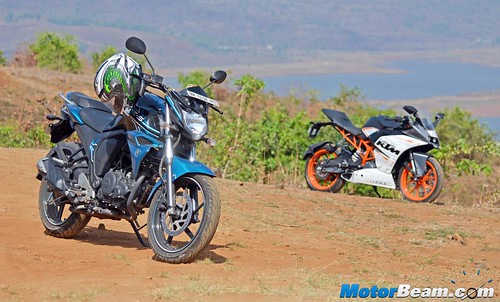 While it won’t keep up with faster bikes, it does offer good comfort to the rider

Let me show you some of the features that I took them for a toss all this while. The most important for me is suspension. I like it when a brand puts some R&D in the suspension of a motorcycle. The brakes, quality of pistons and calliper is vital for good braking performance. The stress on engine, how much the bike runs smooth before showing signs of low oil or utmost due service. The simple chain setting, how far it can go on the first setting and how much it affects the performance from tight to loose condition. The economy figures under beginning and end times before the next service. And some niggle details that work towards good ergonomics and convenience. 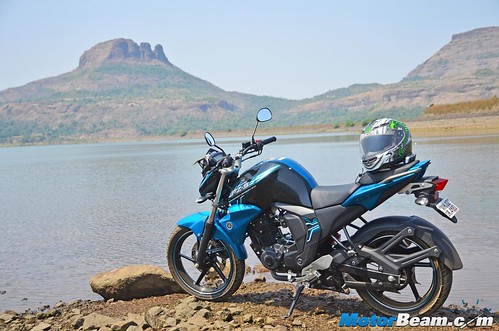 Riding single or plus one, the suspension gives an even performance regardless of you keep it on road or take it off tarmac. The handling while manoeuvring over bumpy roads keeps the shocks to a minimum. There’s definitely an improvement over the previous model. The only thing that has been of slight annoyance is the sound that the rear mud flap over the tyre makes during the ride. I recommend you get it removed. Its only useful during the monsoons, so when you service just before the rain hits down, you can add the accessory back on the bike. On other times, the tail mud flap is doing a fine job. 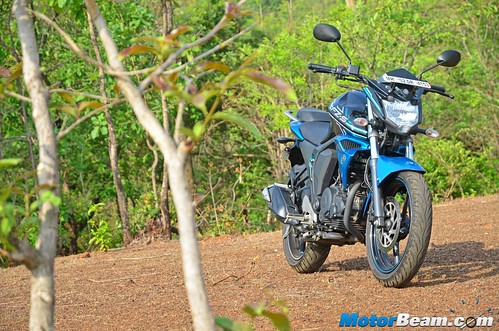 The colour scheme on the FZ V2 looks very nice, the bike has a macho stance

Today is the age of disc brakes. But at times to keep the cost low as possible of low cc motorcycles, manufacturer opt for drum brakes for the rear. Anyways the front is more important and that has a disc so a drum disc combo in such bikes is a fair deal. As far as the delivery is concerned, most Yamaha bikes leave you impressed with their disc brake (front) performance. I on the other hand was glad to see the rear drum brake also a state-of-the-art unit. During the 4000+ kms of usage and very frequently using the braking force, the life on the callipers was just 30% used. So I can vouch that a sane riding person can squeeze a 9000+ kms life out of it. I rarely use the rear brake so cannot much say about its life but their (rear brake pads) cost is very cheap. And if you use in 60-40 ratio for the front and rear then surely the rear brake pads will outlive the front. 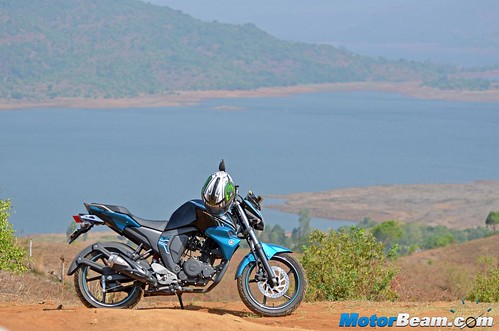 Yamaha offers an easy upkeep schedule for the FZ

The reason we service our motorcycles is because after an interval the manufacturer has estimated certain parts will require adjustment and replacement. This will endure the longevity of the machine. This is actually the very nature of a machine. But what I would like to know is how much beating it can take before it settles down at the corner of the ring. In the most standard format, the clutch cable rarely, chain setting definitely, engine oil 100% and tightening of bolts are the most sorted details. To start with the chain setting, as the wear and tear goes on right from 0 kms, I felt the ride experience as good as new upon reaching 3500+ kms. After that I could feel the moment of chain setting to be done was nearing. So here I give FZ-S a 5 star. With my kind of touring, this would have happened much earlier on bike of this segment. I remember my old Hero Honda Karizma would require a chain setting performed after every 1500+ km weekend ride. 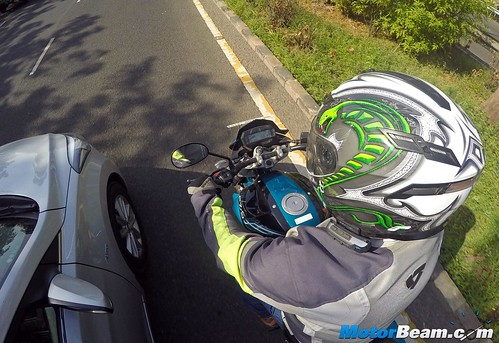 The condition of the engine oil was noteworthy. After dragging the bike in off-road terrain, rushing on the national highway, fighting the wind all the time and touring almost every weekend, the oil level was fine after the first 3000 kms. After that the level was also fine but it had absorbed enough carbon to go for a change. Now here is the test, you will change but I wanted to push for another 1000+ kms and see the picture. Apparently not the engine performance but the economy figures went kaput here on. There was a drop, but not below the 36-38 km/l range. Which is fair enough considering you are testing it beyond the bearable limit. A 5 star on performance too. 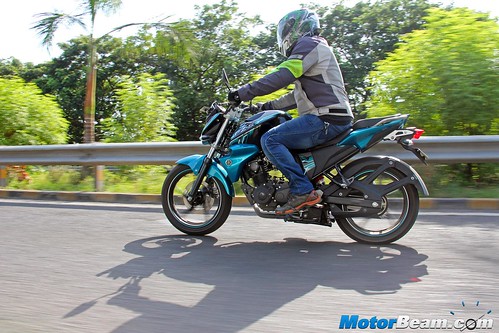 Here are some other things that are worth mentioning. If you are going to spend longer hours on the saddle then it’s a must that the seat is a comfortable one and the ergonomics are true to rider comfort. The cushioning of the seat was at a semi-level in terms of softness. Much better than other commuter or sporty commuter I have ridden. The reach to levers and button on the handle is very clever. Naturally things turn on. I remember on a certain Honda (from the same segment) I use to struggle to find the pass switch. The two helmet locks under the seat is a welcome note. I always tend to have a pillion around and it’s cool to lock both our helmets on the bike over carrying it annoyingly everywhere. About the cold start, thanks to the FI, even after the vehicle was parked for over 10 days, the ignition took off with just one thump start. 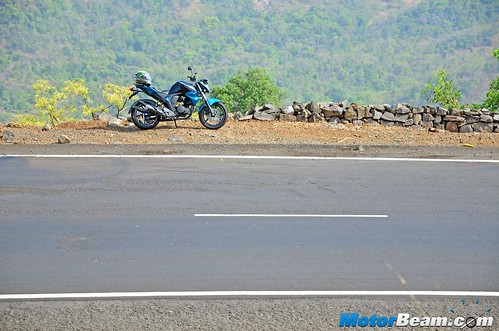 Life and Ride, as colourful as it can get

About the economy figures, well the company naturally claims optimistic figures but if you ride sanely under the 70 km/hr mark which is also indicated by the E mode riding lamp then you can derive up to 50 km/l on this blue boy. Even if you push above 70 km/hr, it still delivers 45+ km/l figure. The ultra smooth feel all the time gives a quite feeling and pleasant ride experience. Considering today’s fuel prices, I think this is a fair deal where power and economy is well balanced. And I forgot to mention one thing, whenever I have ridden this bike in and around city, I was always asked some query or the other about this bike by passerby. The first thing this hints is that the colour scheme of this bike is so unique that it’s a looker in its class. People are always attracted to beautiful things and not all manufacturers can build a beautiful bike. So here is one round of applause for Yamaha artists for delivering beauty in technology. 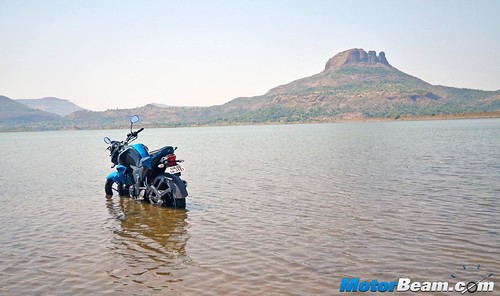 Why just on land, take this machine for a weekend splash too

The Yamaha FZ-S is truly a unique motorcycle from the Japanese bike maker. The incorporation of Blue Core technology, coming with an FI unit, simple nooks that matter for a rider thrown in, given a balance in power and performance handling and braking, this bike is your companion for a good amount of time. After severely using it in chaos situations of Mumbai traffic, the smooth runway like NH-3, off-road trails of Konkan and jumping off here and there, I can conclude that the FZ-S is a successful unit from Yamaha.

The Yamaha FZ V2 might have less power over its competition but it is balanced with many other attributes that a commuter wishes in a bike along with satisfying economy. This motorcycle is a fuss-free daily ride which munches miles smoothly. 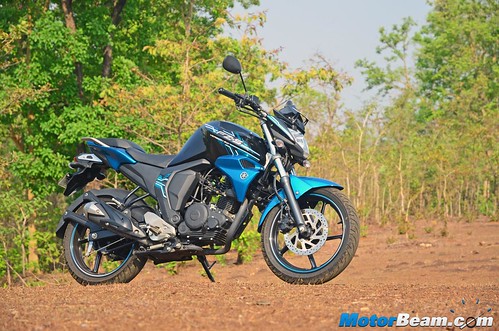 Yamaha’s top selling bike, the FZ is the second best-seller in the 150cc segment 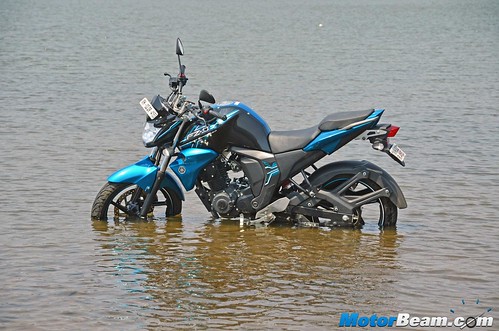 “I got the Yamaha FZ V2 initially and was quite happy with its performance in the city, it’s slick through traffic and the dynamics are supreme. The NVH levels deserve a special mention, the smoothness is unseen in this category of bikes and the big bike feel does make the rider feel confident. A bit disappointed with the lack of outright punch on open roads, I got addicted to another Japanese 150cc long term bike, riding which quite made me forget the Blue Core machine.” – Faisal Khan, Editor, MotorBeam.
“I initially felt the FZ V2 is just another commuter that has got a cosmetic namesake upgrade from Yamaha. But with time and regular play, I became quite fond of it. For my everyday city runs and weekend close by excursions; keeping things at tab on the pocket, this blue streamline from Yammy is a worthy buy. Hell yeah I mighty even do a custom graphic work to make it stand out like a phoenix bird. Or a dragon per se.” – Om Vaikul, Long Term Tester, MotorBeam.
“The Yamaha FZ has been here since a long time and from the time it was introduced, everyone got an eye over it! It brought with itself the purity of a street-fighter! Now even after the inclusion of FI, and the power been lowered down, it still feels like a really good bike. Though the top-end power is lost out, it manages to be a great city bike and comfortable for highway cruising! The refreshed styling also makes it feel like a bigger bike to ride. Even though it has competition now, the FZ would be a choice for Yammie enthusiasts.” – Dhanil Vira, Road Tester, MotorBeam. 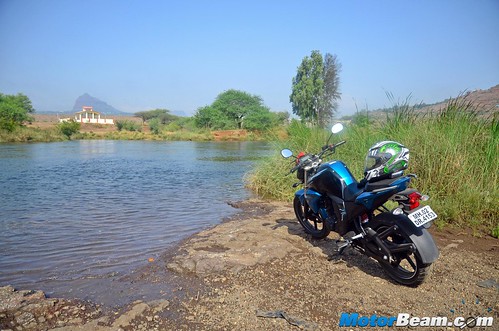