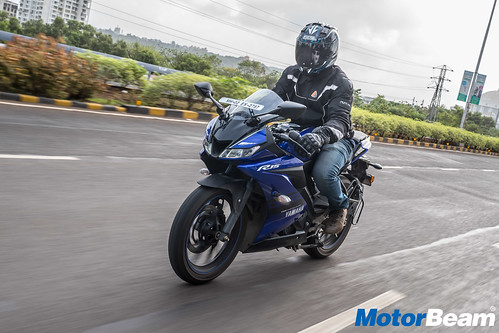 Performance – The R15 V3 comes powered by a 155cc single-cylinder, liquid-cooled and fuel-injected motor that produces 19.3 PS (up from 17 PS) of power at 10,000 RPM and 15 Nm of torque at 8500 RPM. The engine comes with VVA (Variable Valves Actuation) technology and is mated to the same 6-speed gearbox like before but this time around Yamaha has given an Assist and Slipper clutch for the V3 and it works fantastically. Irrespective of how aggressively you downshift, the slipper clutch doesn’t let the rear wheel slip.

The motor has punchy performance at lower revs and pulls really well till almost 11,500 RPM. Exhaust note too is better than before but unfortunately, refinement has gone for a toss. The powertrain feels thrashy and the smoothness of the R15 V2 seems to be missing. Nonetheless, fuel efficiency is better than before and the bike returned us 38 km/l (in hard riding conditions) which is good for a bike of this caliber. 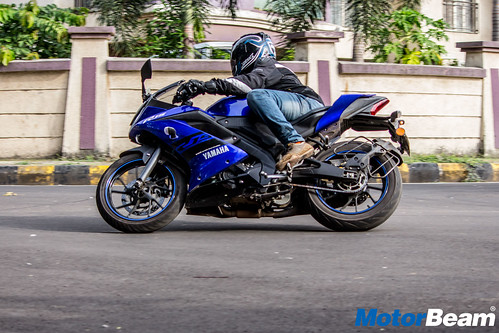 The R15 V3 simply loves being ridden on winding mountain roads and the track, of course

Riding Dynamics – The Yamaha R15 V3 uses the Deltabox frame like before. This gives the bike very good handling and it feels surefooted around corners. While the suspension is on the stiffer side, the clip-on handlebars feel lighter to turn than before which makes the bike nimble around corners and easy to flick into gaps in city traffic. The feedback from the front end is slightly lesser when compared to the R15 V2 and the stiff rear suspension takes a toll on the ride quality of the bike. The motorcycle gets thicker telescopic forks but Indian customers would have sure liked to have the USD forks. 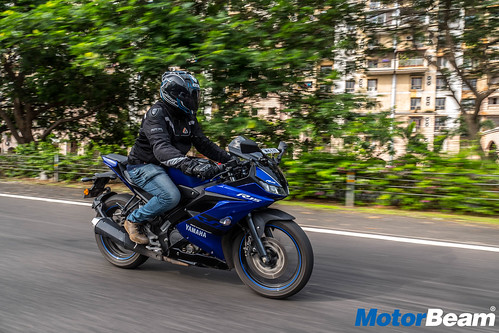 The disc brakes (282 mm at the front and 220 mm at the rear) have an adequate amount of bite but are again shared with the FZ25 which means that ABS has been given a miss. Under hard braking conditions, the bike tends to nose dive. High speed stability is good and the tall windscreen sure deflects the windblast, making high speed runs on the open roads a breeze. The 100 and 140 section front and rear MRF tyres grip the road well but the front rubber tends to lose grip under hard braking. Better tyres can work wonders on this bike.

QJ SRK 600 is a Benelli TNT 600i under a new Chinese brand. While Benelli is an Italian motorcycle brand, it is now owned by Zhejiang Qianjiang   END_OF_DOCUMENT_TOKEN_TO_BE_REPLACED

FCA gives mild internal updates to the Jeep Compass. It can neither be called a mid-cycle refresh nor a facelift. Yes, we are talking about the   END_OF_DOCUMENT_TOKEN_TO_BE_REPLACED